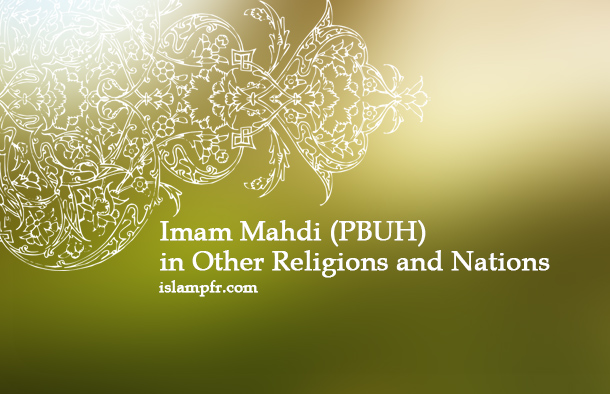 We are going to briefly take a look at the glad tidings of past scriptures and the beliefs of past nations concerning the Savior.
Belief in a savior originates from the divine nature of man; it is this belief that gives hope to the hearts. However; this belief has been recorded in the ancient civilizations’ books. Furthermore, even though there have been differences in the belief in the existence of a savior, this belief has existed amongst most nations, being related to many faiths directly. Due to the divine law of Allah of sending prophets to promise the arrival of a savior, the belief in a savior has been mentioned in other holy books. Though the narrations regarding the savior in other beliefs do not all coincide exactly with the Shiite faith, they at least prove the existence of a savior. This article will be elaborating and presenting the different beliefs of previous faiths about the existence of a savior.

So, in this part of the article we shall discuss the glad tidings of past scriptures and the beliefs of past nations concerning the Savior.

In 35 out of the 150 parts of psalms, Coming of Savior (The Psalms of David) is mentioned.

For the evildoers shall be cut off,” but those who wait for the Lord shall inherit the land. In just a little while, the wicked will be no more…” (Psalm 37:9, 10)

In the book Isaiah:

“There shall come forth a shoot from the stump of Jesse and a branch from his roots shall bear fruit. And the Spirit of the Lord shall rest upon him…but with righteousness he shall judge the poor, and decide with equity for the meek of the earth.”(Isaiah11:1-10)

There are some brief descriptions of the conditions of advent in this book;

The wolf shall dwell with the lamb,”

and the leopard shall lie down with the young goat

and the calf and the lion and the fattened calf together;

in all my holy mountain;

as the waters cover the sea. And it emphasizes on the Divine Expectation: although their delay, wait for him, cause they come with no hesitation.”(Isaiah11:6, 9)

Imam Mahdi (PBUH) in the New Testament (The Gospels and Accessories)

There have been some speeches about him in various Gospels: “For as the lightning comes from the east and shines as far as the west, so will be the coming of the Son of Man…Then will appear in heaven the sign of the Son of Man, and then all the tribes of the earth will mourn, and they will see the Son of Man coming on the clouds of heaven with power and great glory.”  (Matthew 24: 27, 30)

And the same Gospel talks about ‘expectation’: “Therefore you also must be ready, for the Son of Man is coming at an hour you do not expect.” (Matthew 24: 44)

And the Gospel of Mark talks about the responsibilities of those awaiting the savior: “But concerning that day and hour no one knows, not even the angels of heaven, nor the Son, but the Father only. Be on guard, keep awake. For you do not know when the time will come. “(Mark 13:32, 33)

An interesting point regarding the Gospels: “According to American Max  in the “Lexicon of the Holy Bible”, the word ‘Son of Man’ is repeated 80 times in the Gospels and accessories (New Testament), of which 30 are adaptable to Jesus Christ and the other 50 are descriptions of the Savior who will come in apocalypse; And Jesus Christ will come with him and glorify him, and no one knows the date and time of his coming but great God.”

Let it be emphasized that these books, in the view of Shiite, are not holy books. In fact these are adaptations of past Scriptures and are created by the nature of pure men and these predictions should be merely of revelation sources.

In “Basque”; one of holy books of Indians:

“The two worlds shall end to a just king in apocalypse who is the leader of angels and mankind, and truth and rightfulness will be with him…and he will gain what is hidden in the seas and lands and sky.”

In ‘Shakmoni’, an accredited Hindu book, it has been mentioned that: “Monarchy in this world will end by the son of the best creature, ‘Koshen; (name of Prophet Muhammad (PBUH). He will rule on the mountains of the east to west and will ride upon the clouds…”

Furthermore, we read in ‘Vashen-Jool’ about the end of the world: “Eventually, the world will turn toward the one whose name is “Auspicious”, he loves God and is of God’s special servants.”

We may find texts about The Savior in other Hindu books such as:

In “Zand”, one of the holy books of Zoroastrians, the end of the world is discussed in this way, “Then, Izadan will be aided by Ahoora Mazda and will gain a great victory against Ahrimans. It is after Izadan victory that human beings will become prosperous”…

The book of Jamasb Nameh, by Jamasb (one of the Zoroastrian scholars), describes the characteristics of Imam Mahdi (PBUH) as such, “A man with large head, body and arms will come from the Tazian (Arabs) Land, of Hashem descendants with the religion of his ancestors; he will come towards Iran with many troops; he shall civilize and fill the earth with justice such that the wolves and the sheep shall drink water together, the population shall increase and people shall live long lives once again, some men shall have fifty sons and daughters. The hills and valleys shall become full of people and animals. It shall be like a wedding and all people shall again follow the religion of ‘Mehr Azmay’ (Prophet Muhammad PBUH&HP). Tyranny and rebellion shall be a thing of the past, such that people shall forget how to bear arms. If I describe the goodness of this period our lives shall become so bitter.”

And somewhere else he says, “From the (last) prophet’s descendants, someone will come in Medina who is the successor of the prophet, who follows his ancestor’s religion. From the justice he practices, the wolves and the sheep shall drink water together; the entire world will become ‘Mehr Azmay’ (Prophet Muhammad’s (PBUH&HP)) followers.”

Other parts of Zoroaster’s foretellings on “Bahman Posht” are available in detail.

In the book of Zand and HooHooMan Lisen the arrival of Socians, the great savior of the world, has been foretold as: “Marvelous signs shall appear in the sky as signs of the arrival of the savior and some angels will carry his messages from the east and the west to the whole world.”

The ancient Iranians believed so strongly in the arrival of “Socians” that when their empire was defeated decisively in the “Qadesieh war” the third Yazdgerd turned to his great castle, “Mada’in”, and said “Bless you; I will leave now and shall return with one of my descendants who has not reappeared yet” (Book of Jamasb, pages 121-122)

However, the Shiite believes Mahdi (PBUH) is of the descendants of Yazdgerd’s daughter. She was the wife of the third Imam of Shiites, Imam Hussein (PBUH), who is the ninth forefather of Imam Mahdi (PBUH).

Imam Mahdi (PBUH) in other nations

In this part, we try to briefly refer to the beliefs of different nations concerning this issue:

Ancient Iranians believed that Gorza Sepah, their historical hero is alive and hundreds of angels take care of him until the day he rises and corrects the world.

Islam has believed that someone arises from the east and unifies all tribes of Islam and makes them dominant in the world.

Germans believed that a victorious man arises on their behalf, making the Germans dominant in the world.

Serbian people had faith in the coming of Marco Karliowich.

Jews believe that the Messiah (the great savior) will come in the apocalypse and rule the world forever, but they consider him son of Isaac, while he is clearly the son of Isma’il.

The Scandinavians believe that there will be difficulties for people. World wars destroy most of the communities. Then Odin, the Divine power comes and dominates the entire world.

Greeks say ‘Kal’, the great savior, will come and save the world.

Central American tribes have believed that “Cotzlecomel”, the savior of the world, will be victorious after some major events happen in the world.

Chinese people have faith in someone called ‘Krishna’ as savior of the world.

People of Central Europe are waiting for ‘Bokhes’. The

Who is an awaiting person؟ – part 1

I am studying Catholic Bible in English and I have found some interesting facts. Can I send you some English material and if the answer is yes email me and let me know the best way to do this.

Salaam
please send those facts to contact@masaf.ir
thanks

Salam
Islam or Slavs? which one is correct?

Islam has believed that someone arises from the east and unifies all tribes of Islam and makes them dominant in the world.