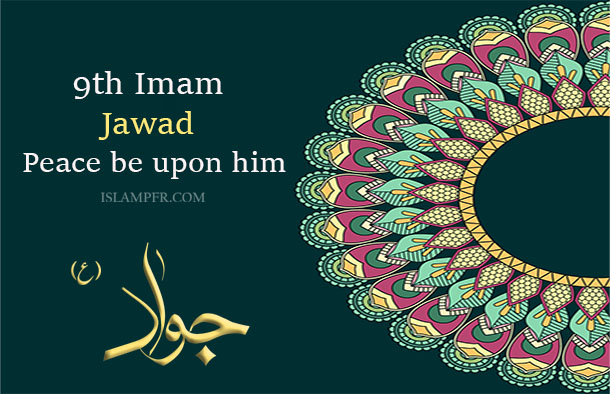 Hakima, the sister of Imam Reza (PBUH), is reported saying that on the night of al-Imam Jawad’s birth her brother advised her to be present beside his wife. According to a tradition, Jawad (PBUH) at his birth looked at the sky and uttered confirmation of the Oneness of Allah (God) and the prophet hood of Prophet Muhammad (PBUH) and succession (Imamate) of Imam Ali (PBUH),(according to the narrations, it had happened by the other Imams before, too)

Jawad (PBUH) undertook the responsibility of Imamate (leadership) at the age of eight years. He was a child when his father was killed by Ma’Mun the Abbasid caliph. He did not act upon childish or whimsical impulses and he accepted adult responsibility and behaviors at an early age because he had a divine heart and divine wisdom. His possession of extraordinary knowledge at a young age is similar to that of the Islamic tradition of Prophet Jesus (PBUH), a figure called to leadership and prophetic mission while still a child.

The story of Ma’mun’s first meeting with Imam Muhammad Jawad (PBUH) is interesting. Once, Ma’mun was passing a street in Baghdad (Iraq) with his soldiers. When the other children saw the caliph, they ran away but Imam Jawad (PBUH) did not. So, Ma’mun stopped his carriage and asked: “Young man, why did you not run away like the other children?”

Imam Jawad (PBUH) replied calmly: “For the following two reasons: Neither had I committed a crime, nor was I blocking the way. Why should I have run away or be afraid? And I also know that you will not cause any unnecessary trouble when your way is not blocked, and your horses may go around me.”

Ma’mun was surprised with this mature reply and asked: “What is your name?”

“Muhammad,” he replied. “Whose son are you?” asked Ma’mun.

Ma’mun became even more surprised at the latter answer and rode on. During his hunt the hawk returned to him with a small fish in its beak. He returned toward the city. Once again, he found this young man who said he was Muhammad son of Imam Ali al-Reza (PBUH) who remained where he was left.

Ma’mun stopped his carriage near Imam Jawad (PBUH) and said, “What does this hawk do for me?”, then he changed his mind and hid the fish in his fist and said “No, instead tell me, what is there in my fist?”

Imam Jawad (PBUH) replied, “Allah has created tiny fish in the river. The hawks of kings sometimes catch fish from there and bring it to the Kings. These kings hide it in their fist and ask a member of the Ahl Al-Bayt (the prophet’s Muhammad’s progeny) ‘Tell me what is there in my fist’.”

Ma’mun said, “Truly, you are the worthy son of Imam Reza (pbuh)”

For the consolidation of his empire, it was realized by al-Ma’mun, the Abbasid king, that it was necessary to win the sympathy and support of the Iranians (Shia Muslims) who had always been friendly to the Ahl Al-Bayt. Then, he desired to marry his daughter Umm Al-fazl to Imam Jawad (PBUH), and with this object in view, he summoned the Imam from Medina to Iraq.

Once, Al-Ma’mun issued a proclamation and organized a grand meeting for the contest which resulted in huge gathering of people from all parts of the kingdom. Apart from noble and high officials, there were as many as nine hundred chairs reserved for scholars and learned men only. The world wondered how a young child could contest with the veteran judge in religious laws and the greatest scholar. Imam Jawad (PBUH) was seated beside Ma’mun on his throne.

Scholars and religious judges began to ask different and difficult questions but Imam Jawad answered them one by one in the best way. There was no limit to Ma’mun’s pleasure. He expressed his sentiments of joy and admiration thus, “Bravo! Well done! O Abu Ja`far! Your learning and attainments are beyond all praises.” As Ma’mun wanted that the Imam’s opponent be fully exposed, he said to the Imam, “You may also put some question to Yahya Ibn Aktham.” Then Yahya also reluctantly said to the Imam, “Yes, you may ask me some questions. If I know the answer, I will tell it; otherwise, I shall request you to give its answer.” Thereupon, the Imam asked a Question to which Yahya could not reply. Eventually, the Imam answered his question.

Then Ma’mun addressed the audience: “Did I not say that the Imam comes of a family which has been chosen by Allah (God) as the repository of knowledge and learning? Is there anyone in the world who can match even the children of this family?”

All of them shouted, “Undoubtedly there in no one parallel to Muhammad al-Jawad.” In the some assemble Ma’mun wedded his daughter Umm al-Fazl to the Imam and liberally distributed charity and gifts among his subjects as a mark of rejoicing.

According to Twelver Shia, the Imam are perfectly able to give judgment on all matters of religious law and his judgment was always legally correct. Imam Jawad (PBUH) like the other Imams and the Prophets Muhammad (PBUH) were born with extraordinary knowledge.

After Ma’mun had poisoned Imam Reza (PBUH) to death he endeavored to show that the death had come by a natural cause. Ma’mun also brought Imam Jawad (PBUH) from Medina to Baghdad with the plan of marrying him to his daughter, Umm Al-Fazl.

After living in Baghdad for eight years, Imam Jawad and Umm al-Fazl returned to Medina. There he found his relationship with his wife strained and upon the death of Ma’mun in 833 his fortunes deteriorated. Since Umm al-Fazl did not have any children, Imam Jawad (PBUH) also married Soumanah, who gave him a son and successor, Ali Al-Hadi (PBUH).

The successor of Mamun’s caliphate was Al-Mu’tasim. With the new Abbasid ruler in power Imam Jawad (PBUH) was no longer protected and his interests and position were imperiled by the dislike that Mu’tasim had for him.

It is narrated in historical books, Mu’tasim encouraged Umm Al-Fazl to murder her husband Imam Jawad (PBUH). Although Imam Jawad was so kind with her and she was happy with Imam but at last she was fooled and poisoned Imam Jawad (PBUH) to death in 835 A.H (29th, Dhu al-Qi’dah, 220 A.H).

Imam Muhammad Al-Taqi Al-Jawad (PBUH) is buried beside the grave of his grandfather Imam Musa al-Kazim (PBUH) within Kazimiya Mosque, in Kazimayn, Iraq , a popular site for visitation and pilgrimage by Shia Muslims. 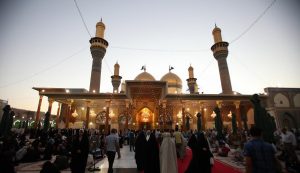