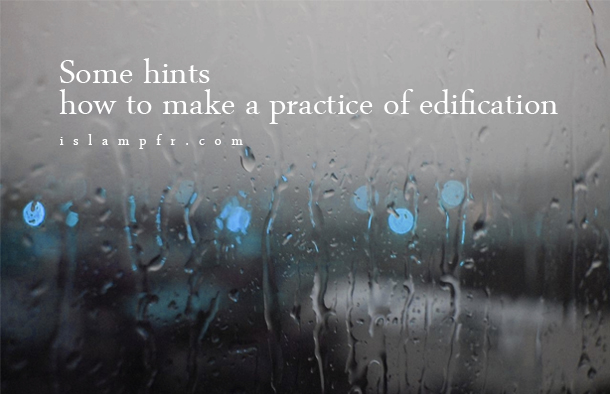 Among them are the following narrations from Imam Ali (PBUH) in the book “Tasnif Ghurar Al-Hikam”.

“Beware! Indeed jihad is the price of paradise, so whoever strives to control the evils of his soul, he gains control of it and this is the most valuable reward for the one who has gained understanding of his soul.”

“The greatest jihad is the striving done against the soul’s temptations.” “Striving results in taming the soul.” “If you strive against your soul’s evil desires, you will achieve God’s satisfaction.” “A person who strives in the way of obedience to God and stays away from sins is as dear to God as a righteous martyr.”

“Truly he who purifies it (the soul) will reach salvation”. It seems that whatever people do is to achieve salvation and comfort. But unfortunately many of us do not know the true salvation or if we do, we have lost the way to achieve it.

Whereas the Wise and Merciful Creator tells us that the way to salvation, freedom and comfort is purification of the soul; thinking about the Hadiths mentioned in the first paragraph illustrates well that jihad against the soul and its purification has a great and joyous result. Do you not think that achieving great Divine rewards and God’s satisfaction causes happiness and comfort? As is narrated from Imam Ali (PBUH) in the above mentioned book “Whoever detests his soul is loved by God.”

“Indeed Allah (The Almighty) has endowed the greatest moral characteristics to the holy prophets, so if someone (other than the holy prophets) possesses these attributes, he must praise the Lord for this. And if someone lacks them, he should beg them from God.” The narrator says: I asked: “What are those characteristics?” he answered: “Virtue and piety, contentment, patience, thanksgiving, curbing one’s anger, modesty, generosity, courage, honor, charity, honesty and trustworthiness.

As it is clear, according to the Hadith, one way to fight against the evils of soul and towards its purification is taking refuge to Divine blessing. And it is also a state of supplication. Notably some lexical experts have said: supplication means asking something with abjectness. [2]

In fact, why have we not asked God in supplication for our purification? It seems that the source of this regretful situation is weakness in faith, which is a deep issue and discussion in detail is required. It is worth noting that Dua Makarim AL Akhlaq, which is the twentieth Dua (prayer) of Sahife Sajjadiye, contains at least 160 ethical requests from God the Almighty, and perhaps you can relate all of them to 12 good traits mentioned in the above Hadith.

According to the Hadith, the next way to succeed in the jihad against the soul and its purification is by imitating the people who have good moral characteristics, which might lead to achieve those good moral attributes.

It has been noted that Imam Ali (PBUH) said: [3] “If you are not patient (against your anger) endeavor to be patient and act like a patient person, because rarely does it happen when a person tries to look like a group of people, he fails (to resemble them).”

Although this moral advice was prescribed for achieving patience, a general rule in obtaining moral characteristics can be derived from it also. Some Nahj al-Balagha exegeses have confirmed this rule. For example, Ibn Maitham Bahrani (God’s mercy be upon him) in his book “Ekhtiar e Mesbah al Salekin”, following this Hadith says: “Tahallom (تحلّم) means practicing to be patient, because most of the moral habits are acquisitive moods” [4]. A similar notion is also found in the explanation of Ibn Abi al Hadid [5].

Here the question may arise, whether this approach is hypocritical or not. While the detailed explanation of this issue requires another opportunity, the brief answer is that it seems the definition of hypocrisy and the hypocrites is something else and does not include a person who is on the road of self-purification and is driven by Divine intentions.

Another way, which is much more important than the two previous ones and is our obligatory duty, is taking steps on the path of strengthening one’s faith. This issue has a close relationship with obtaining religious insight on one hand and avoiding sins and doing one’s religious duties on the other. Of course it is not possible to explain the way briefly.

Yet we should add that in the holy narrations and even the Holy Quran, in many cases good deeds and noble moral and spiritual qualities have been attributed to the “believers” or similarly “those who believe”, which confirms the dependence of those deeds and traits on faith.

On the other hand, piety, which means abstaining from the prohibitions and performing the duties, has been introduced as the key for truth and honesty, supply for the day of resurrection, freedom from any kind of slavery (except God’s), saving from any form of devastation, prosperity and success of happiness seekers, rescue of escapers and achievement of Divine destinations.

These characteristics have been taken from the text of Amir al-Muminin’s (PBUH) Hadith in Nahj al Balagha [6]: “Piety and fear of Allah is the key to open any closed door, it is a supply for resurrection, it causes freedom from the slavery of Satan, and it is a rescue from any destruction.”