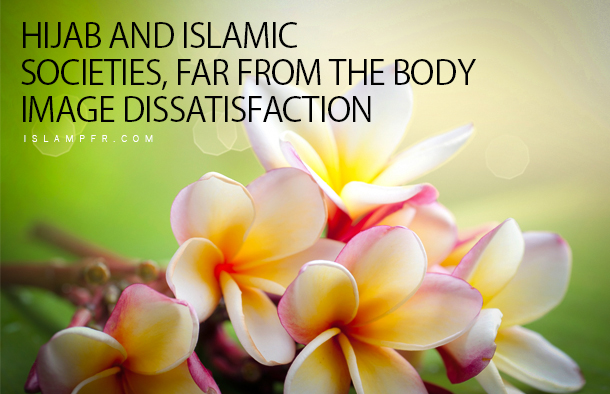 Hijab and Islamic societies: far from the body image dissatisfaction and eating disorders of Westernised society

Body image is defined as “one’s satisfaction with his or her body.” 15

In Westernised society, body image dissatisfaction, eating disorders and other psychological disorders as a result of being unhappy with oneself are rampant. Media and society promote a certain kind of image of the “ideal woman”. This article will examine the incidence of these disorders, the reasons for this body image dissatisfaction and the way in which hijab and living in an Islamic society provide some protection from this panacea. One major consideration is of course the absence of values education in the West that are tied to a religious/cultural tradition. “Values” in the West seem to be largely taught through glossy magazines and mainstream media these days!

First of all, here is a general overview of Islamic teachings regarding “diseases of the heart” (emotional /mental ailments), and also the Islamic attitude towards food. This entails discussing how wellbeing and contentment are defined in Islam.

Although this is the Islamic point of view, it is of course also the universal, common sense approach to “wellness”; without psychological (mental, emotional) health, one is unable to partake fully in life, let alone be a productive working member of society, or parent. This is because psychological disorders affect the physical body and result in physical maladies, eating disorders being an obvious example.

When a particular part of the body is sick the whole body is under terrible pain and life becomes difficult. Similarly when one is afflicted with a spiritual malady one feels remorse in this worldly life also. He continues to be afflicted even after his death…sometimes he is even inclined to commit suicide. The best prevention is to keep the heart pure from defects. 5

When a believer of one of the monotheistic religions becomes afflicted with an emotional/psychological disorder, he must worry also about the impact of this “disease of the heart” upon his hereafter, as our sins, flaws, afflictions must be accounted for in the hereafter.

With feeble body there is very little chance of his soaring very high spiritually. 7

A feeble body is not just one that is weak, because it is being ill-fed; it is also one that has become weakened due to the impact of emotional/psychological stresses. A person who suffers from any psychological ailment, or even just a person who is afflicted by a ‘broken heart”, is unable to achieve their full potential, as their heart has become tainted by the affliction.

It is narrated that the Prophet (PBUH) said: “If the heart is pure, the entire body will also be pure. If the heart has wickedness, the nature of the person too will be depraved.” 4

This is acknowledgment that emotional health is key to our overall well-being. Islam suggests, “Reason dictates and religion commands us to make every effort to cure the disease of our heart. We must care more for the well-being of our heart.” 5

Imam Sadiq (PBUH) has been reported as saying: “If people are moderate in having food, they will have healthy bodies.” 3

Here are some statistics on body image dissatisfaction, and on eating disorders – it remains to be said that there is a relative wealth of information on the topic, with particular focus on these disorders in Western society, yet no concrete solutions have been put forward by researchers.

However, strikingly, in another study, for only 2 % of an African-American sample, does beauty mean having an attractive face and body! 20   There is a different way of conceiving of beauty other than the “Western” idea that it is all in the looks.

Initially, though, let us conceive of this narrowly fixated Western model of beauty. For example, of one of the most popular toys for young girls, the Barbie doll, it is said that “the waist and stretched limbs caused the teenage girls in the West and other countries to avoid eating during their growth age.” 8 It is widely accepted that Western media, magazines exclusively promote the ideal woman as slim, even verging on thin. Sadly, it has also been reported in studies that “the emphasis placed on thinness in the West, besides resulting in negative self-evaluations, is considered to be an important factor in the aetiology of eating disorders.” 14  There is however another factor at play here; it is not just about images paraded in the media – sadly, it goes much deeper than that, it goes to the fundamental values of a society.

(Western) society clearly defines women’s status in terms of their bodies and appearance. 17

Despite supporting equal rights and women’s liberation, society has prescribed specific standards of body attractiveness and a very narrow range of beauty shapes for females. 18

Interestingly, some societies do not promote the same values, and in these societies, body dissatisfaction and thus eating disorders are not at all prevalent.

Islamic culture of course promotes different values for a woman: a woman’s physical beauty is only secondary, especially as it is covered by her hijab. In a study of eating disorders amongst Caucasian-Australian and Pakistani first year university students, aged from 17-22, “although all the groups identified a similar body shape as the “ideal”, the Australian and Pakistani-Australian females expressed significantly higher levels of body dissatisfaction than did the Pakistani females. The Australian females expressed greater dieting and bulimic tendencies.”10

In conclusion, there are several reasons why an Islamic society and women covering up (wearing hijab) makes women much less susceptible to body dissatisfaction disorders.

Modesty is a human quality that can be proposed for mankind, regardless of any cultural or religious tendency. 2

Perhaps it is time for Western societies to embrace the values of other cultures in which outer appearance is only secondary to a good character. This can only be achieved through a complete overhaul of the portrayal of women in all media. An Islamic society offers an easy path towards this goal. Naturally, the adoption of Islamic values would provide a shift towards a society that is shaped by religious faith, and Islam is able to permeate the entire fabric of society, so to make it one that is based on the divine qualities in the human being.

The reason why the man of today has become so miserable and restless is that he has distanced himself from his Lord. He looks at everything but not at God. He trusts everyone and everything except God. 6

I love pets. I have two beautiful thai cats called Tammy(female) and Yommo(male). Yommo is 1 year older than Tommy. He acts like a bigger brother for her. 🙂
I have even created an Instagram account for them.

I wanted to subscribe to your newsletter, but I couldn’t find it. Do you have it?

Keep up the good work on your blog.

Dear Wiki
I am glad that you liked it.
you can also find more about animals in this website
by the way, our Instagram account is https://www.instagram.com/islam_pfr/
take good care of your cats
because animals are innocent creatures

I love pets. I have two beautiful thai cats called Tammy(female) and Yommo(male). Yommo is 1 year older than Tommy. He acts like a bigger brother for her. 🙂
I have even created an Instagram account for them ( https://www.instagram.com/tayo_home/ ) and probably soon they will have more followers than me (kinda funny).

I have subscribed to your newsletter. 🙂

Keep up the good work on your blog.