Guidance of Islam about food and eating habits- 1 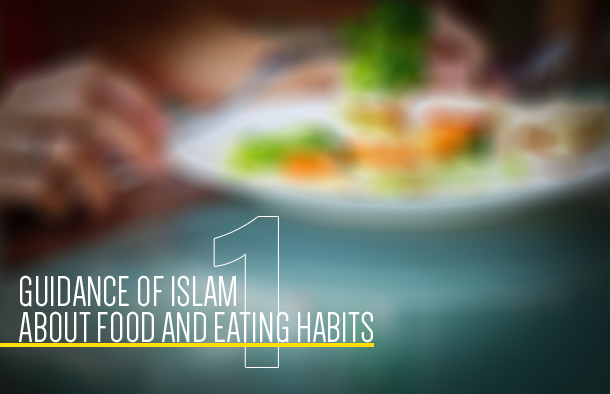 Guidance of Islam about food and eating habits

– An animal that was killed by beating

–   An animal which died by falling from a high place

– An animal that is sacrificed for idols

Dead animals have often died due to diseases, having eaten poisonous greens, or of high intensity of weakness, old age and of fear and horror and it is obvious that consumption of such meat would be harmful. Because there is no movement in the carrion, they don’t have any blood gush and blood bursts; and as a result, some contaminated blood remains in the body.

By the above sanctions, God provoked human beings to endeavor to indulge in protection, conservation, nutrition, and health of their livestock; and God ordered them to save the livestock from getting lost, strangled, beaten, thrown from a height, attacked in a battle of animals [aroused especially by man] and being attacked by wild animals; in addition, God orders them to protect livestock from the evil and cruel people who stimulate animals to battle against each other for humans’ fun and entertainment.

In reply to why carrion is prohibited to be eaten, Imam Sadiq (PBUH) said:” The blood freezes in the carrion and it returns to its body, so its meat gets indigestible and unpleasant because its meat is eaten with its blood.”

Many diseases are transmitted through blood. Sometimes the microbe itself and pathogenic factors and sometimes secreted toxicity which come from them can be transmitted through the blood to different parts of the body. In many other cases, under  the conditions of a disease, various changes emerge in blood composition and perhaps one of the reasons for slaughtering the Halal meat animals is due to the same reason.

There are also other items which must be considered such as the existence of enzyme in the kidney of this animal which make an impact on Histidine (essential amino acid) and change it into histamine.

(For further information about pork, please refer to “Pork in Islam’s view” under the category of “Islamic medicine”).

One of the most dangerous poisonings can be caused by eating leftover and rotten meat. Imam Sadiq (PBUH) says: “Your body gets extremely weakened by three things and sometimes it kills you. Rotten meat is one of those three things.”

In regard to the quality of food, Imam Sajjad (PBUH) said: “Your stomach’s right which you should concern is that you must not eat any forbidden things whether a little or a lot and to observe moderation in eating Halal stuffs.”

In the Quran (95:1) God has sworn by “figs and olives” and scientists also have found lots of benefits for these two fruits.

It is quoted in the Holy Quran about honey (16:69): “In which there is healing for men.” “The healing effects of honey have been proved these days.

From preparation to consumption

In many situations, pathogenic factors of the atmosphere land on the fruits, use the nutrition and also secrete poison which is harmful for human’s health. Eating theses fruits and vegetables before washing them, causes poisoning or getting diseases.

Imam Sadiq (PBUH) said: “There is poison in every fruit, wash them with water before eating”. Foodstuffs are favorable environments for microbe’s growth. If people protect food from dust, they will be protected from getting these diseases.

Another saying is quoted from Imam Sadiq (PBUH) that: “Always cover dishes, if they are not covered, Satan will spit in the dishes and also takes some of the food.”

In the above Hadith, the nutrition of microbes from foodstuffs and the toxicant they secrete is obviously mentioned.

Prophet Muhammad (PBUH) says: “Blowing in food, removes the blessing of it”.

Blowing in foods and drinking water which are suitable environments for the growth and development of bacteria is contrary to health, and lead to the spread of diseases.

When Imam Ali (PBUH) was going to bazaar, He told the butchers: “Whoever blows in meat is not our followers”. Today we know that in this case, there’s a possibility of contamination to carbonic anhydride and microbes.

Prophet Muhammad (PBUH) has said repeatedly: “Do not place meat napkin in your room because it is dorm and barn of the devil and don’t put dust and debris in the back of the room or at home because it is the shelter of the devil.”

According to the Quran (12:47) God says: “You shall sow for seven years continuously, then what you reap leave it in its ear except a little of which you eat.”

Healthy plants have insecticidal compounds; even the chemical which is secreted by the plant and is available in the thin layer of moisture on the leaf surface, prevents the growth of fungi. In many guidelines, covering foods and keeping them is emphasized and we know that in the long-term of maintaining food, their exposure to air causes oxidation and spoilage of food.

Water is highly regarded as one of the blessings of God. In the Quran (77:27) God says  “And made therein lofty mountains, and given you to drink of sweet water?”

One of the ways of water filtering is to pass it from different layers. As a result, waste and germs stay amidst the pores and from beneath, fresh water flows. As the above verse states, there’s a direct relation between the height of mountains and fresh water; which means the more the height of the mountain is the more the natural purification of water will be. In addition to flowing through the layers of mountain, waterfalls and bottlenecks of valleys and foaming, water receives a lot of air and oxygen and increases its cleanliness and cleansing power. Avicenna believed in spreading of diseases through water as he stated in his book “The Canon of Medicine” and he believed that the reason is for the foul smelling components of water which cause infection in the body.

Imam Sajjad (PBUH) said: “The greatest way of cholera spreading is through water”.

In the Quran (13:17), God mentions water as a stable and persistent blessing on the earth. In this verse, it is talked about water cycle in the world and we know that hydrology scientists have proved that the amount of water in the world is fixed and circulates in different states (solid, liquid, gas). It is also noted in the Quran (25:48) that: “And We send down pure water from the sky (clouds)”.

It is mentioned in the Islamic laws (Islamic Jurisdiction) that water is a cleaner if its color and smell is not changed. It is also stated that water in the bathroom should be so clean that people would like to drink some of it.
Imam Sadiq (PBUH) says: “Whoever brushes his teeth should also rinse out his mouth with water” and this states the importance of hygienic water. Imam Ali (PBUH) says: “Lord of the universe made the water clean and with a cleansing nature so nothing can make it filthy unless the color, taste and smell of water change.”

Guidance of Islam about food and eating habits- 2