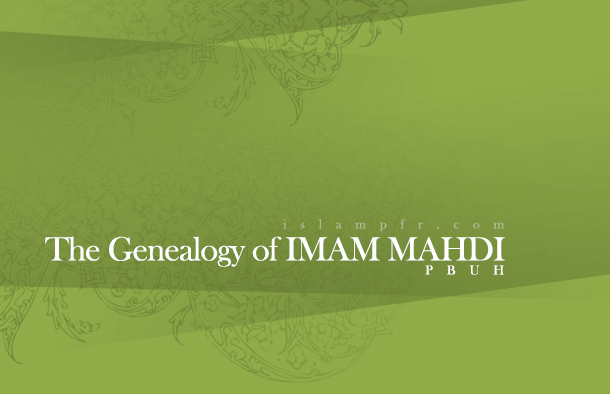 The beginning of the Imamate of Imam Mahdi (PBUH)

Imam Mahdi’s (PBUH) mother was Narjis Khatoon who from father side is Joshua’s daughter, the son of the Cesar, Byzantine Empire and from mother side she reverts to Simon one of the Jesus’ (PBUH) apostles that was transferred from Rome to Medina and then in Imam Hadi’s house, she got acquainted with Islamic Rules under the supervision of Halimeh Khatoon, the daughter of Imam Javad (PBUH). Then Imam Hadi (PBUH) married her off to Imam Askari (PBUH) and accordingly this pious gentlewoman had the honor of being Imam Mahdi’s mother. This respectful lady according to one quotation passed away in 261 AH (874 AC) and as another quotation one year after the 11th Imam’s martyrdom. Her honorable tomb is located next to Imam Askari’s Shrine in Samarra.

The Abbasid Caliphs were fully aware of the fact that soon in Ahl Al-Bayt a holy infant would be born and would remove cruelty and corruption from human societies according to quotations from Prophet Muhammad (PBUH) and Impeccable Imams (PBUH). Based on this, the Abbasid had observed all Imams’ activities from Imam Jawad (PBUH), even they had transferred Imam Hadi (PBUH) and his son i.e. Imam Askari (PBUH) from Medina to Samarra to control their activities. These pressures got extreme in the era of the 11th Imam to lower the Imam’s meetings with his Shias. The Abbasid governors again and again would put him away in custody and from time to time they would raid his house probing everywhere to find any trace of that promised infant. But Allah’s providence was that this blessed infant be born in the ancestry of Prophethood and revelation as this verse of Holy Quran says: “Their intention is to extinguish Allah’s Light (by blowing) with their mouths: But Allah will complete (the revelation of) His Light, even though the Unbelievers may detest (it).” (61: 8)

In the night of Shaban 15th, 255 AH, while there was no sign of childbearing in his graceful mother that promised Imam was born. Thus, in that circumstance which was full of difficulty and terror, Allah’s promise came true and the twelfth Imam enunciated the fall of the rule of the tyrants with his birth.

Although the birth had been hidden, Imam Askari (PBUH) in order to issue the last ultimatum and prevent the imminent diversions, informed his friends, relatives and special Shiites and he even showed his son to a few of them. For instance, Ahmad bin Ishaq al-Qummi one of the Shiite figures says: “I was honored to meet Imam Askari’s (PBUH) and wanted to ask for his Excellency’s successor, when I was at the Excellency’s disposal without having asked my question”, he said:

“Oh Ahmad, since the Omnipotent Allah created Adam, he has not left the earth without Imams and he will keep this tradition unto the resurrection. It is for Allah’s Imams that disasters are warded off and the inhabitants of earth are protected and blessings such as rain fall on them and the earth grants her blessings and fruits to humans.”

Ahmad bin Ishaq al-Qummi asked: “Oh my Imam, who is the next Imam after you? After this question, the Imam went into the inner rooms of the house. Then, he came out of the room while hugging a very cute and bright boy around three.” Then, he told me:

“Oh Ahmad, if you were not important for the Omnipotent Allah and his Imams I would not show you my son; indeed he has the Messenger of Allah’s namesake and has the same title of the Prophet. He is the one who will make the earth full of justice and righteousness. His example among his nation is the example of Prophet Khidr (PBUH).

Ahmad ibn Ishaq says: Oh my Lord! Is there any sign by which I reassure my heart more? At this moment, a beautiful and bright boy said in a very articulate Arabic accent:

“I am ‘Baghiat ul-Allah’ on the earth’ who will take revenge from Allah’s enemies. Oh ibn Ishaq not that you have visited him yourself, do not search for another trace or sign…”

It was previously mentioned that Prophet Muhammad (PBUH) and Impeccable Imams (Peace be Upon Them) have pointed to Imam Mahdi’s Imamate by various statements and almost all revealed the required information about his birth, the life events and features of the Government of His Excellency for people. For instance, in one case Prophet Muhammad (PBUH) addressed Ali ibn Abi Taleb (PBUH):

“Imams after me are twelve among which you are the first and the last one is our Qa’im through whom Allah will conquer the east and the west of the world.”

Or in another statement he says:

“The ninth Imam is the Qa’im in my Ahl al Bayt and the Mahdi of this Ummah who is the most similar person to me in behavior, speech and action. He will reappear after a long occultation, confusion and distress. He will predominate Allah’s religion all over the world. He will fill the earth with peace and justice as it will be already filled with injustice and inhumanity with the consecutive helps and confirmations by Allah”.

Therefore, due to the social and political stagnation created by the Abbasid Caliph, Imam Mahdi (PBUH) began a period of semisecret life, after his birth. In this period which lasted up to Imam Askari’s martyrdom just very few of Shiites visited him and after the 11th Imam’s martyrdom, the Imam Mahdi’s (PBUH) Imamate began, a dangerous stage of life that is known as the ‘Occultation Era’.

The incident of saying the Funeral Prayer for Imam Askari (PBUH) by Imam Mahdi (PBUH) made people enlightened and prevented the possible diversions on the issue of Imamate. This clarified the fact that after Imam Askari (PBUH) his son would take the position of Imamate. Therefore, the dangerous scheme plotted by the Abbasid Caliphate to eliminate the foundation of the Shiite doctrine was foiled.

It should be known that after the demise of Imam Askari (PBUH) the agents of the Abbasid Caliphate intended to appoint someone to say the Funeral Prayer on the body of the Imam on behalf of the Caliph and by this action, based on their wrong assumption they could end the Imamate era and they could introduce the Abbasid usurper Caliph as the Shiite Imamate inheritor. Despite all the plots they had planned, their plot did not work. When the person selected by the government got ready to say the Funeral Prayer for the eleventh Imam, all of a sudden a child about five came close with deliberation and dignity, put the person away and began saying the Funeral Prayer himself. While, with the favor of Allah the regime’s agents could do nothing to react. In the end of the prayer before any movement could be carried out by the agents he got hidden from the eyes and accordingly the Occultation Era commenced.

By Allah’s Providence and along some other considerations, the beginning of his Imamate included an occultation which is known as the “Short Occultation” and lasted until 329 AH. After that, a new stage of occultation which is known as “Long Occultation” started and has continued until now. This period is the hardest test people undergo because direct contact with Imam Mahdi (PBUH) is not possible for everyone and also there is no assigned representative whom people can refer to and ask their questions.

To describe this era, there have many statements in different narrations which indicate the dangerous sedition in the society. Humans in this era due to their negligence toward authentic humane and divine values suffer from calamitous lives although apparently they have a well-arranged, nice and modern lifestyle. This means that although stomachs are full and the life is ostentatious but sprits are anxious and distressed. Losing the correct goal and philosophy of life has caused humans to suffer from disappointment and hopelessness.

In the true Islamic culture, there has been offered a list of very important instructions by Prophet Muhammad (PBUH) and the Impeccable Imams (Peace Be Upon Them) under the title of “The Tasks during Occultation” in order to prevent disappointment and distress. Observing these instructions can make everyone protected from the danger of diversion since not abiding with divine rules and losing steadiness in the correct way of thinking and beliefs will end in complying with the diversions in the Apocalypse.