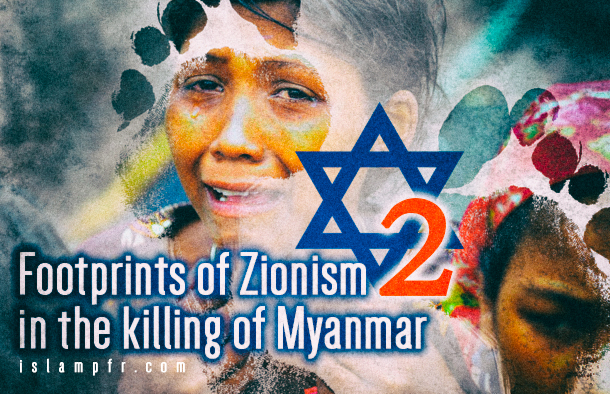 India, due to the large geographical area, auriferous and soil fertility, a multi-religious population, dominance and being on the verge of northern Indian Ocean, flexibility and submission of its people against invading aliens, neighboring China, cheap labor and growing population, was always being coveted by Zion strategists such as the Great Britain empire had known India as the “shining jewel” of their vast colonies during more than a century, and the Tsar of Russia, had always had the dream of achieving India.

Peter the Great has mentioned India as the “warehouse of the resources of the world” in his will. Zion theorists seeking their own interests, have an eye on the Indian subcontinent from a long time ago. India was also the first country in Asia that Freemasonry lodges were formed in, is also in the cities of Mumbai and Kolkata witch were the center of activity of East-Indian companies and were the aperture of penetration of British colonialism to the subcontinent.

Some researchers believe that India is like a big nut to Israel that Israel has removed the leap to break it. Serious and fundamental question that why India is so important, have two major answers: exploiting and swallowing it, weakening and eliminating the power of Islam in the region.

Zionism during the old and new colonial era (mid-17th century until the 19th century) has been having an effective role in tightening the bondage rope of India to Great Britain imperialism. But India will become “safe house” of Zionism only when the long and uncompromising enemies of Zionism in the land, and around it–the Muslims of the Indian subcontinent– are suppressed. Here another goal of them from penetrating in India will appear:

Weakening and destroying Islam and Muslims in the region

Between the years 1919 to 1924 the vast Indian subcontinent saw a crashing Islamic movement, called caliphate movement, witch was defending Ottoman caliphate existence against the invasion of the British government, and was contemporaneous with Zionist-Christian conspiracy of occupation of Jerusalem by the British and the Jewish Agency.

“Sandeep Chula” contemporary Indian researcher and associate professor of history at the University of North Eastern Hill Shillong in his article titled as “The Palestinian issue in Indian politics in the 1920s,” said that after the expiration of the Ottoman Caliphate by Atatürk, the central issue witch used to be the survival of the Ottoman Caliphate, turned into the caliphate issue in India and condemning the Zionist conspiracy. He has reported the growing anti-Zionist struggles of Muslims in 1920 to 1931 and has shown that how high and pounding waves of the campaign can even drag the leaders of the Indian National Congress and the important authorities of Britain.

Since then anti-Zionist sentiments have still remained more or less among the Muslims of the Indian subcontinent. When during the Arab-Israeli Six-Day War in August 1977, “Moshe Dayan”, the famous defense minister of Israel asked “Murajy Desai,” the Prime Minister of India for the establishment of full diplomatic relations India and Israel, “Desai” referring to the same anti-Zionism emotions among Hindi said: “80 million Muslims who live in India and are an obstacle to the realization of our and your dreams.”

According to the Zionists and the British effort and cooperation to destroy Islam, one of the options which was considered was Buddhism as it is very close to Kabbalah (mysticism of Zionists), and both of them totally harmless to the Western Capitalism system. Of course many Muslims were burnt in the fire of this great discovery;let’s look at the process carefully.

It is for years that the West has found out that there is no match between religions and post-modern secular thoughts. The penetration of Islamic thoughts among the various strata of society have caused considerable concern to the West, so western strategists are desperately looking to expand a spiritual thought that while creating a barrier in front of rational religion, can have a good coexistence with the swinger individualism trend in the West. In this regard, we are witnessing propagation of some new religions such as various Christian mysticism, Jewish mysticism known as Kabbalah, American-Indian mysticism, Zen Buddhism in Hollywood.

Why Buddhism, why Kabbalah?

Buddhism with special features was highly considered by politicians in the West, including the lack of a clear definition of God’s existence and finally denial of His unity in Buddhist ideology. Buddhism includes ideas such as asceticism, self-purification, contemplation, meditation and trying to break free from the cycle of reincarnation and finally reach Nirvana that all these points of view is not any threat and harm to Western ideas and the West can safely continue its cosmopolitanism.

In this ideology there is no social responsibility. A yogi, have chosen a life free of pleasure and full of suffering and self-harm and reaching Nirvana is the culmination of this religion. This absolute indifference is exactly what western strategists want. Reincarnation and believing it is one of the wonders that create a far distance from the Abrahamic religions and this creates certainty for the leaders of the West who have materialistic ideas.(((((((((((( The spirit of domination in West, have always been looking for a religion in which people are encouraged to be isolated and inward focused, and this is the principle and basis of Buddhism. So this option can be attractive to the West who seeks for cultural and political dominance in the world. Buddhists do not believe in revelation (inspiration), they believe in relying on rational moderation as the only way for man’s salvation and this has also contributed significantly to the West. Zionists have realized these special facts in Buddhism, so they established a new sect in America, called “JewBu” that combines Jewish and Buddhist thoughts. “Jew” means “Jewish” and “Bu” is the beginning syllable of the word “Buddhist”. For example, Jewish director of the movie “Avatar” says that Avatar is Kabbalism which has passed the filter of Buddhism.

Common points of Buddhism with Judaism and Christian Zionism

According to the centuries-old effort of Zionists to destroy Islam and in this special case, i.e. the abuse of Buddhism to achieve their goal, we find out that why such tragedies occurred in Myanmar. In the context of a targeted global policy they advertise Islamophobia everywhere and the killings of Myanmar, in principle, was a product of this propagated Islamophobia. Myanmar is now witnessing a full-blown ethnic cleansing, such as what took place in Bosnia and Herzegovina in the mid-1990s or what the Zionists have done to the Palestinians. Certainly in the case of Muslims of Myanmar, as in Palestine and Bosnia, a secret transaction has taken place between the West, the Zionists and the Myanmar military and government.

America that itself is a tool for the interests of Zionists, has the voracity of investing in Myanmar and the other issues are secondary, even though the slaughter of thousands of people is involved. “Sit Said Damir” of the humanitarian Relief foundation (IHH) of Turkey also said: major powers have a vested interest in Myanmar and because of these benefits they have chosen silence according to the situation in the country. Demir continued: Myanmar also has important natural resources so the policies of America and China disagree in Myanmar, and the government of Myanmar is important for both Beijing and Washington. “Hillary Clinton” travelled to Myanmar just two weeks before the tragedy and in her meeting with “TheinSein” the president promised to launch the American investors to Myanmar. America’s policy in Myanmar (and other countries in the South East Asia) is to control economics and politics of the country and to put Myanmar against China; a policy that the future strongly pro-Western government led by SuuKyi and her party will realize. These investments are definitely a kind of opening in the depressed economy of America,besides cleansing and repression of Muslims is an advantage for America and the White House can consolidate its position in Myanmar better in the absence of them.

Obama’s visit to Burma shows that America intends to–by taking advantage of all the opportunities that the international system gives it—put its strategy of containment of China in operation and In this way will not ignore the smallest chance.

Washington not only introduces the emergence of China as a great power as a challenge and threat for itself, but also constantly reminds the risk of China acquiring this position to the governments in the Asia-Pacific region. Chino phobia policy of United States has been successful partly because governments in the region, due to their concerns and fears over China have always welcomed the expansion of political and military cooperation agreements with the United States have and even in some cases they themselves have asked for the extension of the contracts. The purpose of America from its Chino phobia policy is to provide the background that China adjacent states welcome the America’s military presence and its continuity.

Burma itself and in normal circumstances, do not have the conditions and standards for the travel of the president of United States.Burmese government is known as an undemocratic government (military government) in the world. So this journey at a time when America in general and the Democratic Party in particular, are claiming to defend democratic values, shows that America on track to contain China, even is ready to give up their ideas and cooperate by a country like Burma, that is very far from norms of democracy. In fact, it can be argued that the main reason of Obama’s visit to Burma was not democracy and human rights issues, but the geo-political considerations and making the power balance.