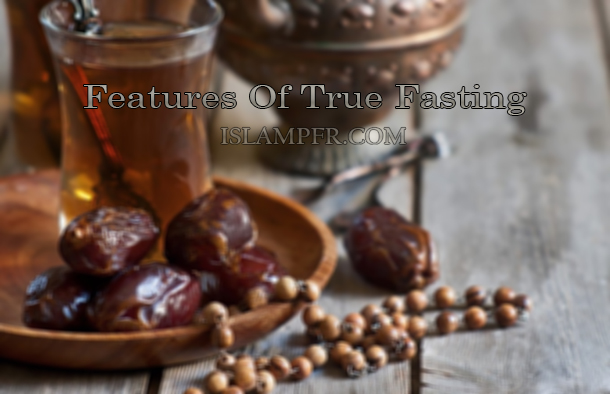 Majesty Fatima peace upon her has said:( مَا يَصْنَعُ الصَّائِمُ بِصِيَامِهِ إِذَا لَمْ يَصُنْ لِسَانَهُ وَ سَمْعَهُ وَ بَصَرَهُ وَ جَوَارِحَهُ) fasting person has no benefits from his fast while does not pay attention to his behavior and what he said and what he saw and what he hear.

Fasting is not just hungriness and thirstiness. The goal of fasting is to achieve its plenitude. If we want to achieve these plenitude completely; we must try to restraint our body and eyes and ears and tongue from taboos; and if we done it successfully we can reach God who is its rewards.in saying of the Holy Apostle of Islam which comes from God: God said 🙁 أنا اجري به) I am the rewards of the fasting.

Jabber ebn Abdolah Ansari has said from our holly prophet Mohammad peace upon him: (يَا جَابِرُ هَذَا شَهْرُ رَمَضَانَ مَنْ صَامَ نَهَارَهُ وَ قَامَ وِرْداً مِنْ لَيْلِهِ) in holy Ramadan if a person became fast during the day and say prays for the sake of God at a part of the night;( وَ عَفَّ بَطْنُهُ وَ فَرْجُهُ وَ کَفَّ لِسَانَهُ) and control his lust and keep his tongue from all the sins;( خَرَجَ مِنْ ذُنُوبِهِ کَخُرُوجِهِ مِنَ الشَّهْرِ) will leave his sins while he leaves Ramadan.

This simile shows that as the leaving from Ramadan is something definitive the forgiveness of sins is definitive too. Jabber became happy and said: Oh my prophet! What a beautiful tradition .it made me so hopeful. The prophet said: (يَا جَابرُ! وَ مَا أَشَدَّ هَذِهِ الشُّرُوط) how difficult is to observe and behave matching these reservation.

We must ask God the ability of such fasting in this great month.

Condition of fasting person from Imam sadiq point of view:

First: controlling the eyes from gazing in to whatever that is taboo or execrable.

Imam sadeq peace upon him has said: when you are fasting all of your body part, your ears, eyes, hairs, skin must be in fast. It means that they do not make sins. Avoiding from whatever which make you negligent from God.

Second: restraint the tongue from delirium, lies and … .leave the controversy, and do not suffer your servant while you are fast.be forbearance and be aware that the debauchery and non-sense things will joint you in the ignorance group.

Third: Restraint the ears from hearing the execrable; because talking about some things are taboo and listening to them is taboo too. Therefore the sin of listening to lies and the sin of usurer is equal.

Forth : Restraint the other part of body like hands and legs from fairs and restraint the stomach from the food which is doubtful at the time of breaking the fast. It’s something meaning less than a fast person break his fast with taboo food instead of permitted ones. Do not make your fast (with lies and backbiting) null. That’s like a person who made a majesty castle and then destroyed it. The Prophet Mohammad Peace be Upon Him said: there are lots of fasters that has no benefits from his fast except hungriness and thirstiness.

Fifth: do not over eat from the permitted food which is the worst thing from God point of view. As a results of over eating; you can not praise God at the nights of this great month. Also the overeating has incompatible to our religious guide lines.

Sixth: the heart of the faster became nerves after breaking the fast, because he do not know whether his fast was accepted from God or not. Whether with the acceptance of his fast he joint in group of devotee or with reject his fast he joint to the group of people who are facing the anger of God. This is the real meaning of fast. This kind of fasting belongs to the prophets and saints.