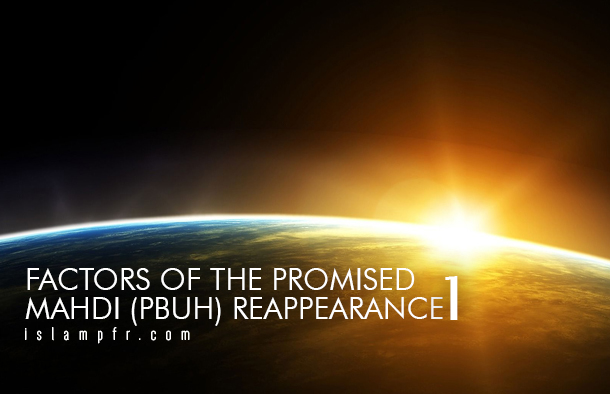 Reappearance Factors are the factors that pave the way for Imam’s Reappearance and are considered as the reasons of his reappearance. It must be said about it: Although the main factor of Imam Mahdi’s reappearance is the “will of God”, but what humans can do for reappearance preparation is the elimination of factors which causes his occultation and to make themselves prepared. This preparation is achieved by doing their duties and obligations specially the duties of the absence era such as: Waiting for the reappearance, praying, patience, self-development, intellectual and social growth. This preparation should be proportionate to the acceptance of global governance: which means it has to be widespread and public and the public opinion should be ready to approve and support him.

Whatever that plays a role in the reappearance of Imam Mahdi (PBUH) and is considered as a reason of his return, can be counted as a Reappearance factor. We can say: Although the main factor of Imam Mahdi’s reappearance is the “will of God”, but what humans can do as reappearance preparation is to make themselves ready: Because every revolution or movement that occurs for a certain purpose, can be successful if the background of the movement is prepared in every field ,otherwise the revolution will fail.

Imam Mahdi’s uprising is no exception from this rule and can win if the conditions are prepared. [1]

So people’s preparation is one of the causes and factors of Reappearance; hence general public should call for him and public opinion must be prepared to approve and support him. In other words, the optional and changeable factors of his occultation must be removed.

To explain more, According to the narrations about occultation factors, some of the factors are unchangeable and we don’t have any authority over them such as:

It is clear that people have no authority over these factors to change them.

But some of other occultation factors are changeable. As it has been noted in some of the holy letters [of Imam Mahdi (PBUH)], disloyalty of people and their sins are the predisposing factors of his occultation.

“If God blesses our Shiites to gather their hearts on the fulfilling of the Promise, their good fortune of meeting us would not have been delayed, and the prosperity of seeing us with right and proper knowledge would have been hastened. Nothing has kept us from them except their unpleasant and undesirable deeds which is coming to us from them” [6].

The theme of this letter is that the disloyalty of Shiites to the promise and covenant with Imam is the reason of prolongation of occultation and deprivation of joining him, therefore the communion of Shiites in fulfillment of the covenant with him can be a factor to hasten reappearance [7]

Additionally, it should be noted that people of occultation era, despite general task, have some duties on the issue of occultation, that by performing them, not only they reach the reward but they also take some steps toward reappearance. We note some of these duties here:

In a hadith from Imam Reza (PBUH) he says: How good is the patience and waiting for his Reappearance. Didn’t you hear the word of God that “”فارتقبوا اِنّی معکم رقیب”. And these word that فانتظروا اِنّی معکم من المنتظرین.Wait! I am waiting with you. Verily, relief comes after the disappointment and those who were before you were more patient than you. [8]

The expression “علیکم بالصبر” “you should have patience” explicitly states that Shiites duty in occultation era is patience on separation. It is clear that patience means being resistant and firm in belief, practice and performance of his way and doctrine.

In the answer of someone who asked Imam Ali (PBUH): Which deed is more admired by God? He said: waiting for Reappearance. [10]

Imam Sadiq (PBUH) says: The closest state of a servant to God and the most admired condition for him is to wait for the Reappearance in the morning and night when God’s agent is hidden from them and he is not visible to them and is covert and they don’t know his location [11]

It is obvious that waiting has two types: natural and legislative

In the natural type, waiting is more done in a passive way and with weakness, but the legislative waiting is active and with knowledge and action. Imam Sajjad (PBUH) confirmed this statement when he says: The awaiting people of his reappearance are the best persons of any era: because God has given them such wisdom and understanding that the absence has been like presence for them. He has made them equal to the warriors with sword beside prophet Muhammad (PBUH).They are really pure and true Shiites and they are the inviters to God’s religion in overt and covert.  [12]

The real awaiting person has such knowledge in scientific aspect that the absence is just like the presence for him; which means he/she doesn’t have any doubt in recognition of Imam of his/her era and in practical aspect he/she preaches people and invites them in overt and covert.

To sum things up, we should say, belief in the unseen, the tendency to justice, hatred of injustice and oppression, confessing the truth and invitation to good are lied in the positive waiting.

In some of the narrations, Praying is considered as the major duty of the occultation era. As Ishagh Ibn Yaghub related from a letter which was received by Muhammad ibn Uthman that Pray a lot to hasten the reappearance. [13]….

In a narration from Imam Sadiq (PBUH), we read that he said: “Surely Mahdi’s reappearance only happens after disappointment.”[14]

In another narration, Imam Reza (PBUH) says” Indeed, the reappearance happens after disappointment and those who lived before were more patient than you. [15]

This means that while people have hope in non-divine powers, there won’t be any thirst for Imam Mahdi’s justice and they won’t seek and demand for Imam Mahdi in an appropriate and necessary way.

[7]  the prosperity of meeting us would be hastened.

Who is an awaiting person؟ – part 1

Who is an awaiting person؟ – part 2