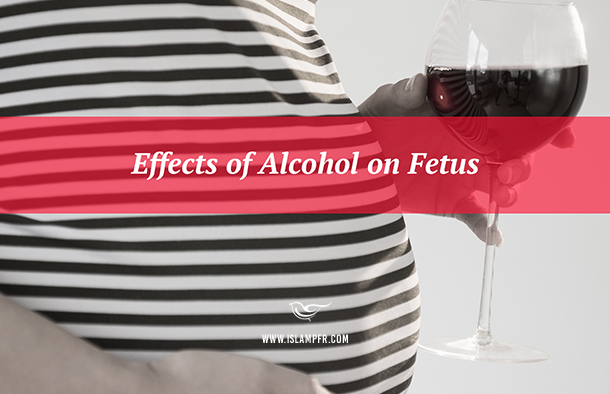 In Islam, every action that is in contradiction with the consent of God is considered a sin. One of the sins in Islam is to consume certain foods or drinks. Drinks that contain alcohol and are intoxicating are considered forbidden in the Holy Quran. Also, there are narrations highlighting the condemnation of alcohol consumption and its harms to the body.

There is a narration by Imam Sadiq ᴾᴮᵁᴴ that says: “Any woman who obeys her husband to have sexual intercourse when he has drunk wine, will commit sins as the number of stars in the sky and the baby born as a result of such an intercourse will be impure.”

With the advances in medical science, many side effects of alcoholic drinks have been revealed; including the destructive effects of drinking alcohol on a fetus.

It has been years that experts all over the world talk about the danger of congenital disorders as a result of alcohol consumption.

In this article, effects of alcoholic drink consumption on a fetus will be discussed.

When it comes to a fetus, some just think about a pregnant mother, while the formation of a defect in a fetus can occur in germ cells of a person prior to conception. Therefore, the side effects of alcohol on a fetus are divided into two parts: Before pregnancy and after pregnancy.

Alcoholic drinks can negatively impact an individual’s germ cells, just like how they can impact other organs of the body.

Alcohol has negative effects on the shape, size, and movement of sperms.

Sex hormone suppression, deformation of sperm, and early or decreased ejaculation are other negative effects of alcohol on male reproductive system.

Alcohol interrupts menstrual cycle and ovulation in women, causing certain changes to ovarian function, such as amenorrhea and anovulation.

Sexual hormone fluctuations and elevated prolactin levels in the blood are some other negative effects of alcohol consumption in women prior to pregnancy.

According to researches that have been published in the European Journal of Cardiology, parents who plan to have a baby, should avoid drinking alcohol for at least six months prior to conception in order to protect their baby against congenital heart defects.

Drinking alcoholic beverages during pregnancy can have dangerous consequences on a fetus. Alcohol can pass to the fetus through the mother’s blood via the placenta. The fetus metabolizes alcohol slower than the mother’s body. Therefore, there may be higher levels of alcohol in a fetus’s blood. Alcohol has negative effects on brain cells of a developing fetus, which grow throughout pregnancy. However, the effect of alcohol on a fetus is not just restricted to cerebrospinal growth. It encompasses a vast range of effects that fall under fetal alcohol spectrum disorders (FASD). Additionally, drinking alcohol during pregnancy can increase the risk of miscarriages and stillbirths.

Pregnant mothers, who drink alcohol during pregnancy may give birth to newborns suffering from fetal alcohol spectrum disorders.

These disorders can include a vast range of physical and mental defects.

During the first weeks of pregnancy when a woman does not know that she is pregnant yet, alcohol consumption can harm the fetus.

The risk of FASD during the first 3 months of pregnancy is much higher, although drinking alcohol at any time during pregnancy can be harmful.

Fetal alcohol spectrum disorder (FASD) exhibits a broad range of problems. There are many possible symptoms and the intensity of these symptoms range from mild to severe.

What today’s medicine has discovered about the destructive effects of alcohol on body, was revealed through Quranic verses by God thousands of years ago, where He considered alcoholic drinks impure and forbidden.

One of the reasons that the Infallible Imams banned marriage to a drinker is the negative effects that drinking has on one’s progeny.

Alcoholic drink is so harmful that drinking it is considered a major sin in Islam and quitting it, even if it is merely done for health related reasons and not for the sake of God, will be rewarded with paradise.

Prophet Muhammad ᴾᴮᵁᴴ said, “Whoever abstains from drinking wine even if he does it for a sake other than that of God’s, will be given by God a pure [heavenly] drink in the hereafter.”

Imam Ali ᴾᴮᵁᴴ asked, “For a sake other than God’s sake?” and Prophet Muhammad replied, “Yes, I swear to God; for the sake of his own health.”

Click here to read the PDF file
You can read this article in Arabic.