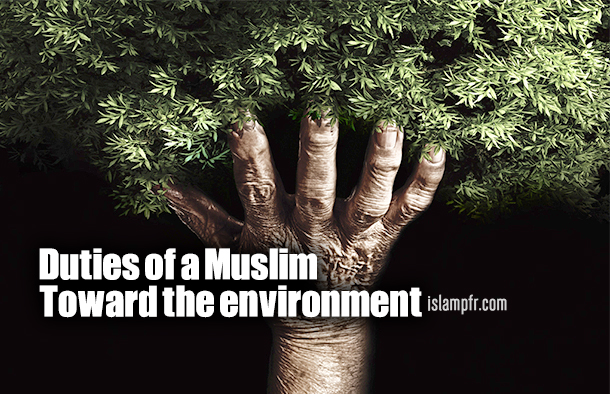 Muslim’s duties toward the environment

What are the duties of a Muslim citizen toward the conservation and hygiene of environment?

What rules and instructions does Islam propound related to this subject?

Islam contains some laws and rules for all aspects and parts of human life, from the topmost complex political and governmental issues to the most elementary personal ones. Therefore, social life and environment are the issues that were and are considered by Islam.

In Islam’s view, creation of man is not nugatory or ineffectual and social commandments in Islam are set based upon the purpose and philosophy of his creation. Evidently, with this feature, all of the variant necessities of human life are considered in these commandments and there are some rules and regulations for all of his social and individual needful issues in life.

There are some principles and generalities in Islam from which we can derive duties of a Muslim citizen. For example:

– In Islam, it is forbidden to destroy anything that the survival of the human race depends on. As though, it is cruelty to mankind or ingratitude and …..

– In Islam’s view, any activity that results in people comfort and their health conservation is a service that is done toward God satisfaction, and is considered servitude and worship of God and man creation does not have any purpose except worshipping.

Environmental protection and observing hygiene of living environment and preventing it from being polluted are efforts toward saving mankind from destruction or an action toward their comfort. So this subject is also important in Islam’s view.

Issues like this and whatever that their importance have been recognized by modern industrial societies are issues that Islam and its leaders have noted them about 1400 years ago and have obligated their followers to comply with their related laws and regulations and fulfill social and individual legislations and also they have shown some solutions to preserve the environment and observe its hygiene.

Here we point to some generalities and particular emphasizes in brief:

1- Eating (aspirating, drinking) anything that is harmful to human health is forbidden except due to necessity. (Imam Sadiq (PBUH))

2- Do not reserve garbage in your house at night and take it out of your house before night. (Prophet Muhammad (PBUH))

3- Also Prophet Muhammad (PBUH) said: “Do not collect rubbish at the yard of your house; because there will become Satan’s habitation.” Evidently, here Satan means the place of gathering vermin and transferring and spreading pollution and various kinds of illnesses.

4- Prevent producing pollution next to delectable water streams and under fruit trees or in paths and ….

5- If the resurrection (Judgment Day) came and there was a sapling in your hand, plant that if you could.

And hundreds of other ethical rules has led a Muslim citizen to regard preserving the environment and its hygiene as an essential rule.

These days, with the advancement of technology and urbanization and the development of consumer societies, thousands of tons of waste is generated daily that their sanitary collection and disposal are the most important issues to consider and pay attention to.

In the enlightening school of Islam and all Devine religions, human life has value and maintaining it is necessary. Accordingly, the Holy Quran orders the Muslims not to destruct themselves by their deeds. “And make not your own hands contribute to your destruction” (AL-BAQARA (THE COW)-verse 195)

So, in Islam, humans are not allowed to infect their own living environment and also the others, and be indifferent to the most urgent health issues and deprive the community of healthy living by their negligence.

Moreover, according to a rule named “No Harm” which was set by Prophet Muhammad (PBUH) in his saying: “In Islam, it is forbidden to harm yourselves and others”, human should not even use their own resources in a manner that causes harassment and harms others.

Based on the teachings of the Holy Quran, human is not prohibited from enjoying this life and its blessings but he is prohibited from wasting, damaging and misplaced use of them. “O children of Adam, eat and drink the blessings of God but waste not by excess for Allah loveth not the wasters. (AL-ARAF: Verse 31; AL-ANFAL: Verse1)