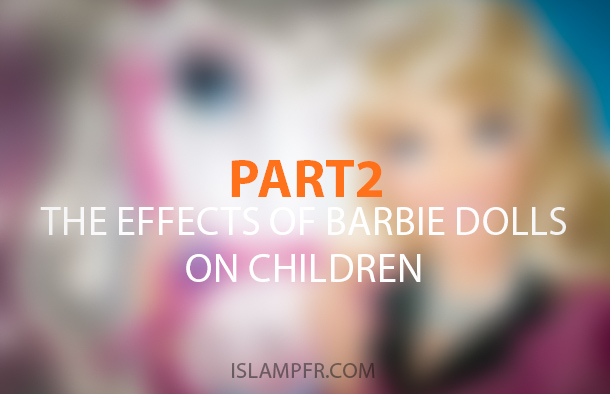 The effects of Barbie dolls on children

** America’s cultural strategy and the Barbie

Since the depicting  America’s cultural doctrine based on humanism (a human-centered rather than God-centered life), liberalism (permissiveness), secularism (secular thinking and  materialism) and hedonism (pleasure-centeredness), it is natural that American politicians and cultural strategists strive to strengthen their cultural foundation through various practices and strategies and to expand and extend it in America and all around the world.

One of these ways is to train Americans as well as other nations’ girls based on American cultural features. Consequently, as the best and most efficient way, if the girls of other nations are trained with the American “values”, at the time they assume the role of wife and mother in their own communities, they will run their societies based on American values and this is the most important offensive function of an invasive culture that they nurture citizens of other countries by their own values.

That is why the Barbie has the highest impact and value in America’s cultural strategy. And in the arena of defense against the cultural invasion of Barbie dolls, the most important task in the first step is the depiction of educational and cultural risks of this doll. Therefore, warnings should be taken into account.

** The educational mechanisms of Barbie dolls

Unlike other dolls, Barbie dolls don’t invoke  figures of a kid and don’t have a baby face, rather they are a twenty year-old American woman with all of her body characteristics that are designed and manufactured with great precision and they enforce themselves as a role model in the minds of children and adolescents by their images on most of the essential needs and requirements of them such as stationery, bags, shoes, sweets, dishes, clothes, watches, personal belongings, etc. which are more than tens of thousands items available on the market even in our country  to make children and adolescents  buy the doll.

Buyers of Barbie dolls  are not done by buying a sole doll and they have to buy and update all the complementary stuffs such as bed linen, bathroom fixtures, swimsuit, party clothes, cosmetics, which are changed, reproduced and distributed for several times every year.

Obviously the fashion of Barbie clothes and all that is offered as the belongings of this doll, have become the model of clothes and other belongings for the girls and women and thus the girls who are familiar with the Barbie dolls are grown with the taste of Barbies (or more accurately, with the American taste and desire) and when they are mature they will have the same taste as the Barbie does (or an American woman). So whatever is produced in the West for human degeneration, they had already created the taste and the need for it at the expense of consumers.

We should not forget that so far, all countries or nations have failed to make a long-lasting and serious competitor for the Barbie including “Sandy Doll” in England.

** The Barbie and the media

To achieve the anticipated goals and expected functions, this strategic toy has to be advertised in a different and acceptable way and by taking into account all the artistic and technical subtleties. Moreover, since it is the age of communication, any phenomenon has to seek the support of the media and proper advertisement for survival and increasing of its impact.

It must be reminded that one of the media functions is to merge the consumers’ tastes and publicize a particular product.

“In 2001, Barbie dolls appeared in its first computer movie entitled the “Barbie in the Nutcracker” and ever since a significant number of computer-animated movies and pornographic films have been produced about the Barbie.”

One of the interesting points about media support of the Barbie is its website. After entering the website even your cursor changes its shape and turns into a flying butterfly. After entering the site, people “can play in one part, they can walk with Barbie on the beach in another section or they can celebrate their birthday in a Barbie house and …” and this has made a great attraction for children.

** The Barbie and the Industry

As it was mentioned above, the style of American life should represent all parts of a life. Industry has helped the Barbie to get universal. Today, most of the girls’ needs can be found with image and advertisement of the Barbie in different countries. Being universal and having significant sales, make these products to have more economic prosperity and makes it possible to be produced in various qualities to be available for different levels of income.

To make this section brief, and to provide an overview of different related issues, some instances (of Barbie’s damaging effects) are mentioned here.

One of the functions of the Barbie is to highlight the sexual instincts in the minds of girls and to teach them sex and according to some anti-Barbie activists, it is a promoter of sex who cannot create love.

Reduction of modesty and promotion of sexual behavior has begun from the point that not only the kid can change underwear of Barbie doll but also they are encouraged to do so and in many cases she is exposed to sexual organs of the doll and gradually the obscenity of seeing these organs fades away for the kid.

The fact that children will lose the chance of being in the beautiful and lovely world of childhood because of the mental pollution and sexually precocious puberty is so regrettable.

Although the Barbie’s body shape is designed in such a way that it seems impossible for any woman to continue her life with these physical features, the effect of presenting Barbie features as the “criterion for current female beauty”, has led many women and girls to be on a diet and try to have the same body shape as the Barbie which has resulted in malnutrition diseases such as anorexia and bulimia.

“According to statistics, one fifth of university female students in America is suffering from malnutrition and approximately twenty percent of people die due to these diseases. This issue is so common and worrying that in some universities of America, diet foods like salad in the dining halls is skillfully enriched with carbohydrates so that the students who only eat salads don’t get malnutrition”

It should be noted that not only students but also the actresses and female artists are trying to transform their bodies into Barbie-like figures which are the Beauty Queen of women by spending a lot of money and with the help of skillful cosmetic surgeons of face and abdomen.

In this regard, the efforts of feminists to show that Barbie beauty standards are false and unreal, is so interesting:

“A Barbie weighs only 46 kg with a height more than 2 meters. While the average American woman’s height and weight is 163 cm and 66 kg respectively. And if a Barbie doll could come to existence in the same dimensions, it could not bear her weight, could not have monthly menstruation and of course it could not have the possibility of fertility and pregnancy at all.”

In this regard, there is also an American proverb that says: “No matter how lean or rich you are, it is still not enough.”

We mentioned earlier that the greatest fashion designers of the world have helped the Mattel Company and have designed a variety of elegant and beautiful dresses for Barbies. These clothes are often luxurious and belong to the wealthy class of society. And although it conjures up the beautiful dream of wearing these dresses in the future, it also leaves the regret of the dress in children’s hearts. Not only the clothes but also the Barbie accessories are very expensive.

Paying attention to the Barbie doll phenomenon and its effectiveness during more than half a century makes any wise person think about how a doll can have all these cultural, social, psychological, and other destructive effects and how adroitly it has misused the negligence of millions of people and has been stuck in their minds. In this regard, one of the experts has beautifully said that “The Barbie is a Trojan horse”.

Considering the precision and elegance in designing this effective and universal cultural weapon is a sign of permanent observation of cultural and political changes of the world by the designers of the Barbie doll. In this regard the statement of Brenda Andolina, a marketer of Mattel Company, is very shocking who said “We always carefully examine the statistics of newborns and we fully consider the combination of their parents’ cultures and languages”.

This point should not be ignored that the West and especially America uses its entire cultural, political, economic and even military means to define its own standards of an ideal human and of course with the help of mass media they show the acceptance of such model and standard as something optimal and achievable.

On the other side, there is the duty to confront this massive influx and to use the ample capabilities of toys in modeling for girls and future mothers of society because women have an important role in the rich culture of Islam and their health ensures the public health.

Achieving a model for girls’ training requires a national commitment and organizing all the intellectual, cultural, economical and other powers and there is no doubt that the day we succeed in the education of future mothers of our country, we can claim to draw a bright future and prosperous society with moral and mental health for all the people.