Did the Shias of Kufa martyr Imam Hussain ᴾᴮᵁᴴ? 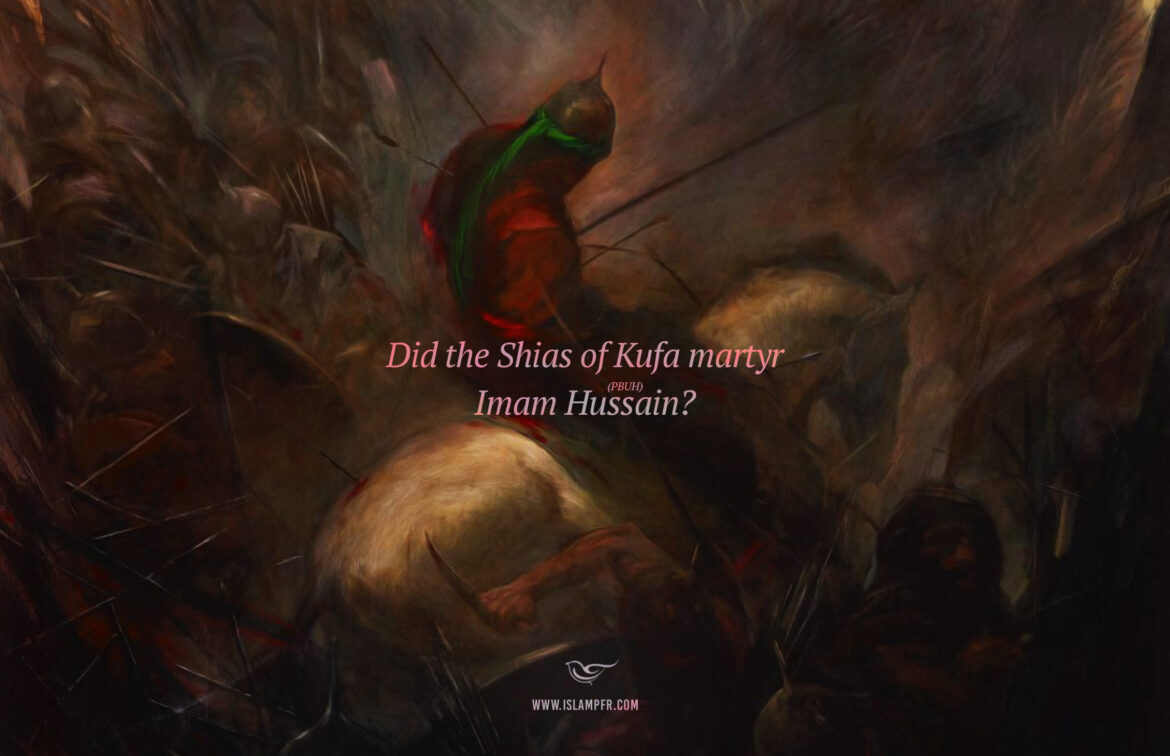 The followers of Bani Umayyah and Wahhabism have tried to misrepresent the rise of Imam Hussain (PBUH) as a gesture of revolt, riot, scattering the nation and an act of rebellion against the Caliphate in different centuries and even in this day and age, and they’ve tried to prove that Yazid was entitled to kill a rebel against the central Caliphate. In this regard, they even refer to the narratives in which Prophet Muhammad (PBUH) has given the command to kill the one who breaks the integrity of the nation of Islam and they say: “Indeed Yazid killed Hussain with the sword of his ancestor!” Or by citing to some of the books of Shia scholars and some incomplete and incorrect interpretations, introduce the people of Kufa as the Shias of Imam Ali (PBUH) and Imam Hussain (PBUH) and consider his killers the same group! Here are some examples of these allegations:

1. The difference between the concept of Shia Muslims in the Early Islamic era and the present era

Ibn Taymiyyah states in Minhaj al-Sunnah: “In the Early Islamic era, a person was called Shia Muslim who preferred Abu Bakr and Umar over Imam Ali (PBUH); the only dispute was over Uthman, and they considered Imam Ali (PBUH) superior to him.”

According to this definition, the Shias who killed Imam Hussain (PBUH) does not refer to the Shias of the Twelve Imams, but they were the majority of Sunnis who believed in the affection of Imam Ali (PBUH) and the superiority of Abu Bakr and Umar over him!

2. The assassination of Imam Hussain (PBUH) was the direct command of Yazid:

According to the Sunni sources, the killer of Imam Hussain (PBUH) was Yazid ibn Muawiyah, may God curse them (as an example):

Ibn al-Athir states that Ibn Ziyad said: “As for the killing of Hussain, Yazid gave me the choice between me being killed or killing Hussain, so I chose to kill him.”

3. Imam Hussain (PBUH) was assassinated by the Shias of the progeny of Abu Sufyan

According to the narratives in some Maqtals (the written reports of Imam Hussain’s (PBUH) assassination), Imam Hussain (PBUH) referred to his enemies who were present in Karbala as “the Shias of the progeny of Abu Sufyan”.

Al-Khwarizmi states: “So he shouted at them: Shame on you, O Shias of the progeny of Abu Sufyan! If you do not believe in religion, and do not fear the Day of Resurrection, at least be free in this world.”

4. Imam Hussain (PBUH) was assassinated by Nawasib; those who believed in cursing Imam Ali (PBUH) and hated him

It is stated in some of the Sunni books that the killers of Imam Hussain (PBUH) were Nawasib who hold grudges against Imam Ali (PBUH) and shouted: “Indeed we kill you due to the grudge against your father.”

5. The presence of the Companions of Prophet Muhammad (PBUH) among the killers of Imam Hussain (PBUH)

One of the answers that has paralyzed the Wahhabis is some of the Companions’ presence in the army of Umar Sa’ad. According to the Sunni sources, there are a number of Companions among those who wrote letters to Imam Hussain (PBUH) and participated in the army of Yazid in Karbala; on one hand, if they were Shias, then it is proven that there were some ones among the Companions who were the Shias of Imam Ali (PBUH), and on the other hand, if they were the enemies of Ahl al-Bayt, then it is proven that there were enemies of Ahl al-Bayt among the Companions. This contradicts the beliefs of Wahhabis and Sunnis about the Justice of all the Companions and them being in Paradise.

According to Ibn Hajar al-Makki, “Abu Hamid al-Ghazali (an honorable Sunni scholar) and others states that it is forbidden for the preachers to narrate the assassination of Hussain and its events to the people; as it informs them of the quarrels and disputes among the Companions; since awareness of this issue would provoke the peoples’ anger towards the Companions and lead to questioning them.”

Some of the Companions who were present in Karbala in the army of Yazid are mentioned:

6. Extermination of Shia Muslims in Kufa by the command of Muawiyah

“Ibn Abi’l-Hadid says that [Muawiyah] appointed Ziyad Ibn Sumayyah as the ruler of Kufa and also Basrah; he searched for the Shias -he knew them since he was one of them during the time of Imam Ali (PBUH). He found them from every nook and cranny and kill them; threatened them and cut off their arms and legs and blinded them; and hanged them from the palm trees and exiled them from Iraq till no prominent Shia was remained in Iraq.”

7. Most of the Kufans were followers of the Second Caliph:

Historical narratives indicate that the people of Kufa followed the Caliphs before Imam Ali (PBUH) so that when he took over the Caliphate in Kufa and decided to remove an innovation introduced by Umar -Tarawih- and sent Imam Hassan (PBUH) to the mosque to prevent people from doing so, they protested and opposed and yelled that “woe, the tradition of Umar has been lost.”

Ibn Abi’l-Hadid says: “It’s narrated that when Imam Ali (PBUH) was in Kufa, people gathered around him and asked him to appoint an Imam for Tarawih, but he banned them from this prayer and said that it’s against the tradition of the Prophet. They left Imam Ali (PBUH) and themselves appointed someone as Imam for the prayer. Imam Ali (PBUH) sent his son, Hassan (PBUH), to them, he entered the mosque holding a whip, when they saw him, they ran towards the door and yelled “woe, the tradition of Umar!”.”

It’s been repeatedly claimed in the Nasibi Wahhabi channels during Muharram that the killers of Imam Hussain (PBUH) were the Shias themselves who invited him and eventually assassinated him, but according to various narratives and sources, this false claim is rejected and rooted from the different concept of Shia in the Early Islamic era and its current concept.

Did Umar, Abu Bakr, Usman and … participate in the failed assassination of Prophet Muhammad ᴾᴮᵁᴴ?