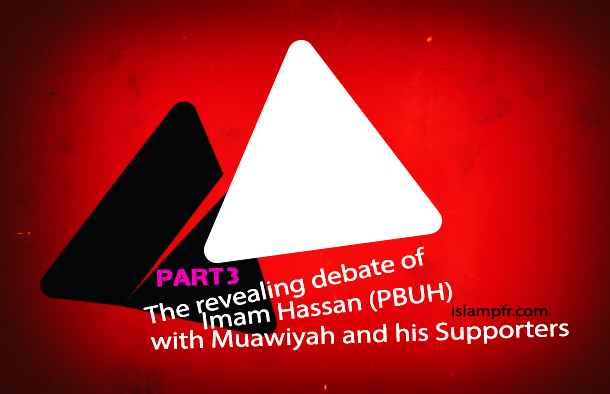 “O Amr ibn Othman! You were unable to realize the wicked deeds of Muawiah due to your stupidity. You are like the mosquito who told the palm tree: Beware, I want to take off! And the palm tree answered: I never even felt your presence, let alone be worried about you taking off! By God I do not feel that it is in your interest to act in enmity towards me, let alone give me any hardship. I shall tell you that which is related to your words.”

“Are you insulting Ali due to his ancestry? Or do you consider him far from the Holy Prophet? Or has he behaved wrongly towards Islam? Or has he ruled unjustly? Or was he fond of the worldly matters? If you claim any of these you shall be a liar. On your claim that the blood of nineteen men of Bani Umayyah is upon us from the War of Badr: they were killed by God and his messenger…”

“The Holy Prophet (PBUH) said: “When the number of the children of the toad (meaning the Bani Umayyah as shall be seen later below) reaches thirty, they shall pass Gods property among themselves and humiliate His servants and do corruption towards His book, the Holy Quran. When their number reaches 310, damnation shall come to these against the others. When their number reaches 475 persons, they will be wiped out faster than chewing on a piece of date. After this speech Hakam ibn Abolaass came forward wishing to talk on this issue, but the Holy Prophet said: Be quiet as the toad can hear.”

“When the Holy Prophet had a dream about the Bani Umayyad taking the Muslim Nation’s affair into their hands after him and became very disturbed, God the Almighty sent this verse of the Holy Quran: “The Night of Power is better than a thousand months.”  Meaning (experiencing) the Night of Qadr is better than 1000 months (that the Umayyad Caliphes ruled). I bear witness for and against you that after killing Imam Ali (PBUH), your Caliphate shall not last more than 1000 months, as God the Almighty has informed in the Holy Quran.”

“You Amr ibn al-‘As! You who hate Imam Ali and are cursed and abortive, you’re nothing but a dog. Your mother was adulterous. You were born in the bed which was common among several men, then a group of men of Quraysh were fighting over you, including Abusufyan ibn Harb, Walid ibn Mughayrah, Othman ibn Haarith, Nasr ibn Haarith bin Kalde and Aas ibn Wael who considered you as their son. Eventually, the man who was the lowest in terms of ancestry and the most vicious in terms of position and the most adulterous one overcame and took you as his son. You’re talking about your hatred of Muhammad (PBUH) with this background?”

“Aas ibn Wael imputed the Prophet to sterility; as one whose name and way would be forgotten after he dies. So God sent the verse: “For he who hateth thee, he will be cut off (from Future Hope).” [108:3] Your mother was the woman who went to Aabd Qays clan’s houses, places and valleys for adultery. You are the one who was always an enemy of the Prophet and denied him most.”

“You were one of the men who went to Najashi on a ship. Those worthless people who went to Ethiopia and were about to get Ja’far ibn Abi Talib and the immigrants killed; but your Plot and scheme failed as you lost credit and your lies were revealed. The infidel’s words trampled and the words of God won.”

“And about what you said about Othman, shame on you, O unbeliever! You are the one who made fight against him and ran to Palestine waiting for result. When you heard about his death, you took refuge with Muawiyah! You are such a mischievous person! You sold your belief and faith for another one’s vale. We don’t blame you for the hatred and lack of compassion towards us, since both in the time of ignorance and the time of Islam you have been the enemy of Bani Hashim. You satirized the Prophet with Seventy verses of your poetry. Then the Prophet said: “My Lord! I don’t long to rime, anathematize him 1000 times for every verse in which he satirized me.”

“You Amr ibn al-‘As! You chose to deal your faith and religion with the worldly gain of another. You sent gifts for Najashi and went to him for the second time, not learning from the first time! You meant to get Ja’far ibn Abi Talib and his companions killed, and when you could not get what you wanted, you colluded against your friend, Ammarah ibn Walid.”

“And you Walid ibn Aqabah! By God I don’t blame you for your hatred towards Imam Ali, since he whipped you for dipsomania, and also killed your father in the battle of Badr. How do you dare to revile him while God named him as true believer and named you as debauchee in 10 verses in Quran? Like the verse in Sajdah surah which says: “Is then the man who believes no better than the man who is rebellious and wicked? Not equal are they.” [32:18] or like the verse in Hujurat surah which says: “O ye who believe! If a wicked person comes to you with any news, ascertain the truth, lest ye harm people unwittingly, and afterwards become full of repentance for what ye have done.” [49:6] Why do you even talk about Quraysh while your father was from Safuryah and his name was  Zakwan.”

“And about what you think, that we killed Othman; Talha and Zubayr and Ayesha didn’t dare to say such thing, how dare you?! If only you could ask your mother about your real father, she would leave Zakwan and claim that Uqba ibn Abu Mu’ayt was your father to get the benefits of his position. While God will punish you and your parents in the world and hereafter for all your wickedness, he would not oppress his servants.”

“And you Attbah ibn Abu Sufyan! You are out of your mind and I shouldn’t answer you! You lack any reason, so I cannot blame you; there is no hope for you. If you revile Imam Ali, I won’t be surprised. You do not even match the bondsman of his bondsman. But remember, God is waiting to punish you and your parents and your brother. You are son of the father that God describes them in Quran:” Labouring (hard), weary, – The while they enter the Blazing Fire, – The while they are given, to drink, of a boiling hot spring, which will neither nourish nor satisfy hunger.” [88:3-7]

“Do you threaten to kill me? So why didn’t you kill the man who slept with your wife? While he inseminated your wife and imputed his child to you! Woe to you! It’s better to take revenge on him than to threaten me.”

“I don’t blame you for reviling Imam Ali, because he killed your brother in the battle. Imam Ali and Hamzah (peace be upon them) were among those who killed your grandfather who deserved the fire and torment of Hell for his evil deeds. Imam Ali was the one who exiled your uncle by the Prophet’s (PBUH) order. And about what you said that I wish to be Caliph, I should; because people are begging me to be the Caliph. But you are not like your brother (Muawiyah) and your father, since your brother was the one who rebelled against God more than others and sought to kill Muslims more than others and also sought the position that was he did not deserve. He deceived people while God plans and the best of planners is God.”

“And about what you said that Imam Ali was the worst person of the Quraysh for the Quraysh, I swear he never humiliated the dead and never killed any innocent.”