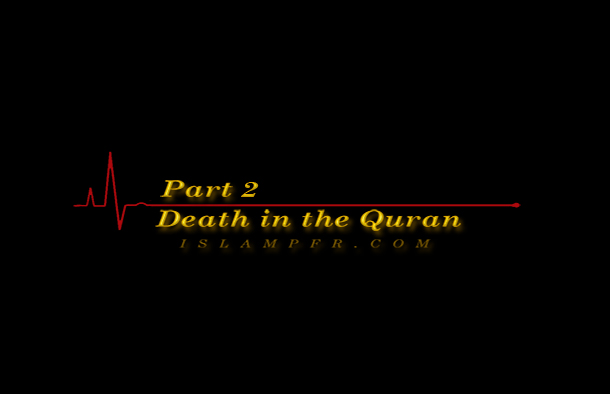 Sleep is a kind of death

According to Qurans description, the same rule implied to humans, but a man gets in the bosom of death when he sleeps, and he surrenders his soul to god or angel of death. At this time, there is only a narrow bond between soul and body, and if it is cut, then the death shall be complete and the soul shall not return to body. Thus according to Quran every human being experiences the death by every sleep and returns again, to observe an example of resurrection.

Death in Quran, means to be transferred from one position to another. It means that men lose nothing by their death, and what he gains by this process is worth what he puts behind. It is like the transformation which a moth endures. A silkworm on a tree, then a cocoon, and eventually it becomes a moth who can fly, and a little before it had nor the beauty nor the powers of a moth to fly.

Every sequence of life and death of the human beings in the womb, this world, Barzakh and the other world is the same. With a difference that, a moth follows this path naturally, but man follows this path depending on his efforts and by showing his capacities and talents. As much as he realizes more of his talents, he shall gain more in the afterlife.

Anyway man should eventually, face death and experience it. In the opinion of Quran, death in any form is a transformation. Such a transformation is his ultimate fate which shall not be delayed nor hastened. Eventually any human will experience his new life at the time of his death.

In the 30th verse of the surat of “Qyamah” the concept of “Ehtedhar” is called “to be driven” because any one is driven to god upon death, which means that this is a compulsory movement.

Application of the word “driven” means that any man dislike to go to the lord by death; so he should be driven on the channel of death by force.

Men have much interest to this world and they don’t want to leave it, so their soul should be taken by force and he is not willing to easily surrender his soul, abandon to another world and leave his body.

Holy Quran refers to multiple aspects and condition of men upon death, when it narrates gradual death and cutting off the soul from the body in (75-26to30) and invites people to give attention to this instance and avoid committing any sin and having any misbeliefs. (6-93) (47-26&28)

Many events occur before death, some of which is listed below:

The soul comes up to the throat, which is one of the conditions before death. Quran uses such an expression to show the terror of men upon death, as if he is dominated by his enemies and is in a tight position and he can’t go further or back.

Holy Quran denotes that the soul comes to Jugulum which is a bone beneath the throat and in the top of chest.

Holy Quran takes this condition as a sign of the power of god over men and men’s disability against god. (56-83to87)

Condition of men upon death

Holy Quran refers to the position and condition of men upon death and describes his look which is full of pity and fear. This is while the dying person asks for help by his body and tongue and tries to free himself. Holy Quran denotes that the lord is closer to him than the people who are next to him upon death, to show the disability of men and the power of god.

At this time the relatives and friends of the dying person say in despair “who is able to cure him?” (75-27)

One has no hope for cure and rescue at this time and will be convinced that there is no escape from death and when he opens his eyes to Barzakh and the other world, and takes a glance to paradise and the hell, he will be definite that there is no come back.(75-28)

Now he must say goodbye to his possessions, children, life and relatives and leave what he has gathered together and there is separation between them.

Then his feet shall stick together and he twists himself and there is no life power left in him to keep himself from death. (75-29)

The condition of disbelievers and tyrants before death

Angels come to their bed and proceed to take their soul. (6-61)(32-11) According to Holy Quran the arrival of the angels is different for disbelievers and faithful men. Because the tyrants and disbelievers have a very bad condition and die in the most wretched way. (16-28) (6-93) but the faithful and good people pass away while the angles give them good news and welcome. (16-32)

It is described in the Holy Quran that the angels hit the back and face of the disbelievers and hypocrites (47-27)(8-50). They hit their face to show what is waiting for them in the future and hit their back to show them what they left behind.

There shall be no repentance upon death and if there is any hope for any man it is before this time. Thus the repentance of pharaoh is not accepted. (10-90&91) The holy Quran describes in the 18th verse of the Surat of “Nesa” that when the truth of life and death is revealed, the repentance is useless.

At this instance, men’s demand for the death to be delayed and return to life is meaningless, because the ultimate time is fixed and it can’t be delayed or hastened. Holy Quran refers to the confession of some tyrant people upon death to their disbeliefs, which means they’re aware of their position and condition, and unseen has been revealed to them. So he confesses to the truth and that he has been misbeliever and blames himself. Even some of tyrants ask to return to life and correct their deeds, actions and thoughts, but this confession is useless upon death when everything is revealed. (7-37)(33-99&100)

Holy Quran also denotes that the death is coincident with man’s acquaintance with this new condition and he enters paradise or hell, although this paradise and hell are part of Barzakh. But then unseen shall be revealed to him and his death is the time of his torment or comfort. (36-36)(40-46)