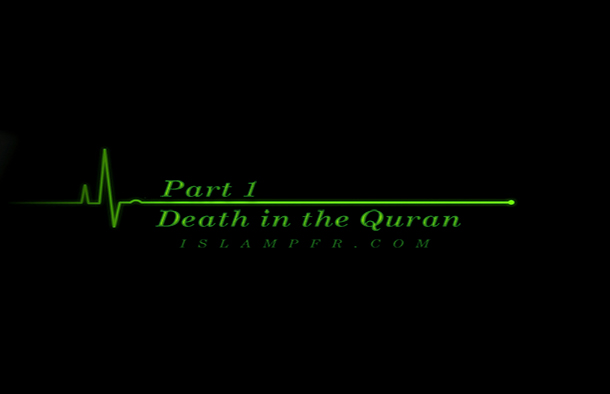 The description of Quran And divine teachings about death And Provides the fact of that. This means that Doom and auditing Will be realized As a natural process.

Death is most important concern is human. Because death is born With each life And anything that is called life, embrace Death Too. For these reasons, The concept of life and death are interdependent And where there’s life Death within it-Not in it side and out of it, It is waiting for the moment To show their dominance.

Equally It is clear that the concept of human life, Death is in the darkness and obscurity. Equally That Life is appearance and obvious, Death is a inner and the unseen. That is why the The name and the concept of death and its meaning Scaring people And having anxiety in their lives.

Undoubtedly Recognizing this important issue is very important for everyone. Access to cognitive resources to it is Very hard. Because who dies Never Do not have the opportunity to return and will iterate his experience And Report the events and issues that In the past he. This lack of return, Another fear has unleashed Among people alive And has caused To the concept of death to be more scarey. believe that this return is impossible And cause destruction Causes Sometimes death is the end of life And it is begin of Destruction of No Return.

The teachings of the divine Special attention is given for Description and analysis of death. Death Meant todeath and destruction and death is At odds With the purpose of creation and the Creator and God. For these reasons, divine teachings have serious attempt to explain it And by stating that death Created the creatures of God Such is life too, Attempts to explain the purpose of the creation.

Description of the Quran and the teachings of the revelation about the death and the fact it Suggests that Resurrection and auditing Will be realized as a natural process.

It seems that Quran as a divine teachings from the God Who is the Creator of life and death Can be the best source of human intelligence and death. In this writing we efforts To with review the concept of death And the human conditions at the time of death And moribund Define from language of the Quran What is the human encountered and describes analysis of the Quran from mortality and truth it.

Life in the trap of death

With any life a death is born And every living creature that is created will taste death Flavor. Thus, It is said in the Islamic Narratives When Resurrection and After the first whiff of Tyre any created will be died. Then emergence and Outbreak the God by name of Jabbar Dominates, and Emanation for any Existence with this name, All created will be Die. At that time the God command to death: Die death too. Then is time to The calling in being, Who is the King and reign over you today? And because there is no one except God himself answer: existence is for only Dominates God. It is said in verse Who does not respond because That is not any Respondent, thus himself answers.

Accordingly Except God, the Creator of life and death All creatures, even angels They die At any positions, and even Angel of Death Which brings death to others Falls into the trap of death And Surrender to God his life. according to narratives, the God Early Gives life to Seraph angel To blow in Tyre And creatures with him Whiff again alive.

The Concept of death

Death in the Quran Concept Not in the sense of death and Nothingness It is meant obit and departure. Obit means to Catch and departure means to Perfect and fault-free reception. Accordingly, Death means complete capture to lives and Spirit with God or the angel of death Or representatives of the angel of death. This capture means to transformation from world to another world and from state to another more complete state.

From the perspective of the Quran Death not only in the end of life rather It happens in every moment and human every moment Unweave clothes and Wears clothes new life. Hence the God is every moment in a dignity from dignity of his creatures And brings for them to perfection. That is why that without the grace of God All creatures are destroyed and Collapse in a moment And Wraps the system universe.