Home Articles Clothing in the life of the Prophet (PBUH)
Articles 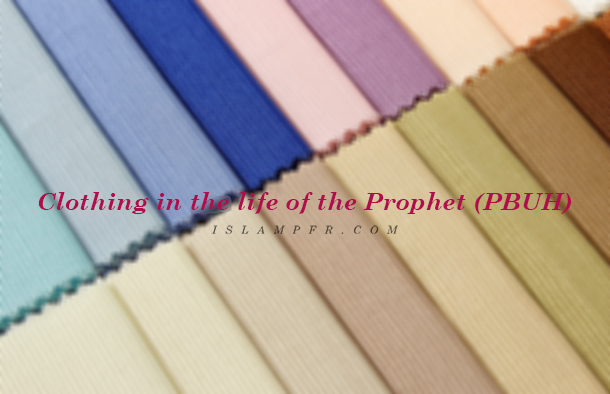 Clothing in the life of the prophet (PBUH)

Prophet Muhammad (PBUH) when he wore new clothes, he said:

Thank to the God who covered something on my body adorned among people.

Clothes, is for covering the body and protecting it against heat and cold and pollution and is an honor and adornment for human being. Changing it to an instrument for self-glorification and lux and knowing it as value, is a kind of deviation from the philosophy of clothes.

Therefore,” simply getting dressed” is one of the manifestations of simple life and releasing from financial interests. Prophet (PBUH) used to look at life and world in this way and lived in this way and never saw value in “clothes”.

Here we mention some sample of the life of the prophet (PBUH) about clothing, clothing material, color, size, number and how to wear shirt, shoes, hat, and turban and rob…:

Prophet (PBUH) paid attention to both physical health and simplicity and healthier type of clothing. Cotton clothes were his favorite. Imam Ali says:
”wear cotton clothes because it is God’s prophet’s clothes”.

He used to say:” I won’t abandon 5 things till I am alive … one of them is wearing woolen clothes “.

Most of prophet’s clothing was white and he used to say:”were white clothes to your living people and shroud your dead people with white cloth”.

The prophet had a cloth which was colored by saffron and he sometimes said prayer with people by only wearing that.

Red, was a color which was not accepted by prophet.

Prophet (PBUH) was an absolute sample of purity and adornment. He also paid attention to this purity in getting dressed.

White clothes, automatically shows pollution and dirt and those who are bounded to the life of prophet, will wash and clean their clothes. In addition expansion of the mind and refreshing the morale are if the benefits of wearing bright and white clothes.

Clothes which make people proud or making them arrogant or superior is disagreeable.

Long clothes that spread out on the ground, is a sign of arrogance and used to be a way for nobles in the era of ignorance. Prophet besides interdicting those kinds of long clothes, used to wear a type of clothes that didn’t reach to his ankles. This was about the cloth that he tied around his waist as a loincloth, and the cloth that he wore on it, used to reach up to middle of his shin. His cloth was sometimes smaller than bathing gown, or was a woolen clothes which was stripe with black and white lines that he became very handsome by wearing it.

Among his philosophy signs in getting dressed and not knowing his glory in clothes and its type, is that he used to wear every kind of clothes that was provided shirt, lain cloth, toga or anything else.

Prophet’s simply getting dressed and his not being dependent on world glamorous effects and not loving it’s opulence and material effects, was expressed in every part of his life including   clothing material and type and carpet and mat and …

It is said that he sometimes used to sleep on matting without having anything under him.

He used to wear everything that was provided and found it lawful including bathing gown, woolen toga and …

The thing which was important to prophet was the clothes being permissible not the price, material, sewing and attraction.

He used to say to his pious companion, Abuser Qafari:”O Abuser! I wear rough clothes, I sit on the ground, I lick my fingers after eating, I ride pack animals without saddle and I give a ride to someone else beside me. These are my traditions and those who turn away from my traditions are not of me”.

In another narration, it is said that he had a cloak that he used to fold it and put it under himself whenever he wanted to say prayer (or move).

When he was at home, he used to sew his own cloth and patch his shoes.

One day, Omar came to him while he was sleeping on matting and it grooved his side. Omar said:” O prophet! Wish you would spread something” prophet said:” what do I want to do with the world? The example of I and the world is like a passerby who has rested under the shadow of a tree for some hours in a hot day, then has abandoned that place and I left”.

Hat turban, skull cap, is considered as clothes, although they don’t cover the body. Covering the head during pray or in other times is of the Islamic traditions. Although “there must be wisdom inside the head, not having a hat isn’t disdain”

At the time of praying, speech and Jihad, based on the situation, he used to cover his head with something. He was also sometimes bare head.

Narrated by Imam Sadiq, prophet (PBUH), used to wear white striped skullcap and hat and at the time of war, he used to wear a kind of skullcap which covered his ears.

In other times, he used to wear skullcap under his turban.

Of course he sometimes used to wear turban without hat or hat without turban.

He had a black turban that he used it to cover his head and say prayer with it.

If we enter the usage of towel and kerchief for drying hands and face after ablution to the discussion, it’s good to know that prophet (PBUH) had variety of towels, with different names and various usages. That is relate to hygiene and discipline It is narrated that he had a kerchief and towel that dried his face with it after ablution and if he didn’t have it with himself, he used to dry his face with his clothing corner.

His adornment, especially during his presence among Muslims in the mosque and for praying and speech displays another part of his tradition. His cloth for Friday prayers was special.

In some of the narrations it is said that he had two special clothes for Fridays except the clothes that he wore in other days.

Customs of getting dressed

Although getting dressed is a routine for every day, but the life and tradition of religious authority in these field are also important for us. Whenever getting dressed prophet used to wear the right part of first and at the time of taking off he started with the left part.

Sometimes without wearing any other clothes he used to wear just a hood and tied its both sides between his shoulders and at home or out of home or at the time of praying for dead people, he said prayer with it. He also sometimes said prayer with a loose cloth he had two clothes of woven that used to wear them only at praying. He ordered and encourages his nation for cleanliness.

He loved doing and starting things with right hand in wearing clothes and shoes and brushing hair.

When he bought a cloth if the sleeves were longer than enough, he used to cut the extra part and he didn’t let anyone to sew its edge and used to say that “ it’s sooner than this” we decorate the end of this part with two sentences of prophet about clothes and the customs of getting dressed.

Jazak Allah Khair , I was searching for this