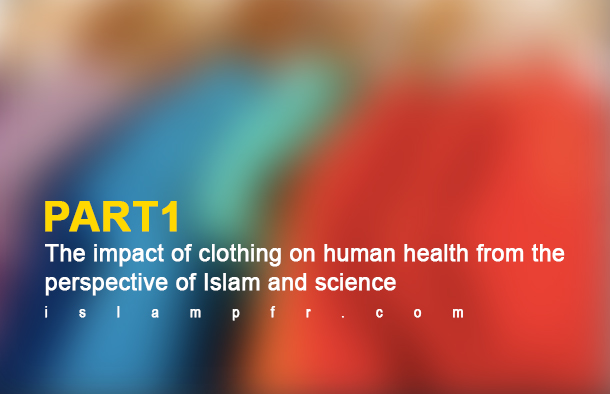 As something that is almost permanently in contact with the human body, clothing can have different effects on human health due to differences in color, material, model and size and if it is chosen based on the principles of Islam and the commands of Imams, it can be a factor which protects human health.

According to narrations, clothing can be divided into two general categories: appropriate and inappropriate and the most appropriate clothes are those that are clean, white, made of cotton or linen, fragrant and comfortable.

And as it is understood from the narrations, Imams have paid more attention to the effects of clothes on the spiritual health and they have attributed the positive effects such as modesty, patience, self-control, adornment and being under God’s protection to the selection of appropriate clothing and negative effects such as pride, abjection, sorrow, and the enmity of God with man to inappropriate clothing.

The effects of some features such as color, material, model and size have also been studied and tested on human health in classical science and the outcome of these tests shows the importance of Imams’ speeches which had been stated several centuries ago.

As the results of the experiments which were done on the effects of colors on humans indicate among all the other colors, white is more important and is more applicable to the protection of human health.

Cotton and linen clothes are also the best clothes which are compatible with the human body and tight clothes increase the risk of diseases such as asthma, blood disorders, fatigue, digestive problems and skin allergies.

The clothes which are chosen based on the culture of foreigners and infidels bring some effects such as moral corruption and sexual infection and sexually transmitted diseases and divorce and the clothes which are chosen to satisfy fame-seeking and sensual desires will incite other people’s jealousy and will result in waste of life and waste of other people’s rights and it will also cause moral vices such as pride and arrogance and grandstanding.

To wend the path of evolution, human beings require the divine commands which are issued through revelation to the messengers and transference of those commands to the Imams. As every manufacturer knows better how his products work, the Creator who is the best of the creators is well aware of the needs of human as one of his creatures. That’s why when he sent Adam and Eve down to the Earth, the first need he met was clothes which he sent down from heaven to cover their imperfections and to adorn them.

So clothing is one of the first needs of humans which has different types and features and paying attention and recognizing these features as they have been realized by the creator of the universe is necessary.

His ordinary clothes included: full-length garments, turban, shirt, pants, shoes and belt. He used clothes with different colors (green, white, brown, yellow, black) according to different situations, the clothes which were all relatively loose and were made of cotton or linen. Most of his clothes were white and he strongly recommended wearing white clothes.

He had a patched garment which he sometimes would wear it and the length of his clothes was above the ankle.

The features of appropriate clothes from Imams’ perspective

According to the narrations of Imams, appropriate clothes are the ones which are Halal, clean and adorned, made of cotton or linen, fragrant and it is better to be white and sometimes rough and chosen economically.

The features of inappropriate clothes from Imams’ perspective

The habitudes of wearing clothes

Many rituals are mentioned in narrations about wearing clothes especially the new ones that among them we can mention saying “In the name of God” at the time of wearing, not wearing clothes of lower body while standing, wearing shirts before pants, wearing clothes while facing the Qibla and performing ablution and praying while wearing new clothes and giving alms to the poor. Compliance with these rules can help maintaining the human health.

By checking various narrations about clothing, it is understood that if the clothes are selected appropriately they can have a significant impact on the health of human soul and body.

One of the effects is the adornment of human appearance which causes joyfulness, social decency and preservation of human dignity. Another effect is the disappearance of grief which occurs by wearing clean clothes and yellow shoes. And the results of giving clothes to poor people are humbleness and modesty in heart and self-preservation.

Inappropriate clothing effects on the health of human soul and body

One of the effects of wearing inappropriate clothes is degradation behind God and it   occurs by wearing infidels’ clothes. The other effect is humiliation and debasement of a person and enmity of God towards him that will be caused by wearing clothes in order to show off as well as the grief that is caused by wearing black shoes and by wearing the lower body clothes while standing.

Effective factors are divided into three categories according to the clothing material: the production and transport of electrical charge, penetration ability of clothes and reflection and removal of internal and external radiations.

Each of these factors can change according to the material of clothing and can have different effects on humans.

Among all kinds of clothing, the clothes that are made of cotton or linen are the most appropriate ones because they do not increase the electrical charge of the body and thereby provide relaxation and increase in human tolerance. Due to more physiological similarity to human skin, these materials have more permeability and facilitate the removal of body excess heat and by the prevention of disorders caused by the lack of body excess heat removal, they play an important role in maintaining human health.

Thanks for sharing so amazing information about clothing.

I’m from iran and have 17 age
thanks for your website ../