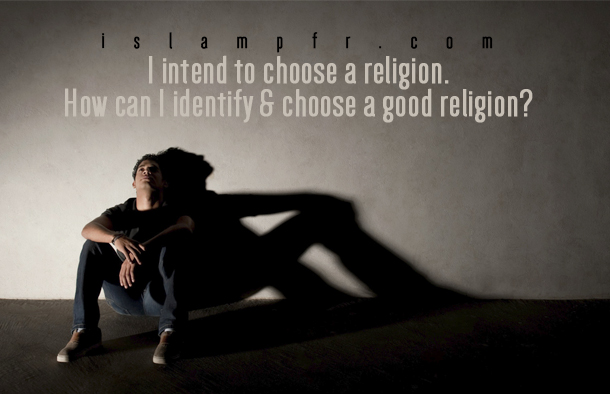 “I intend to choose a religion. How can I identify and choose a good religion among all these religions in the world? How can I recognize which religion is real and true?”

Before asking “which religion should we choose?” we should ask “which God do we want to select to worship?” In this case we can choose a “religion” easier.

It is obvious that choosing a religion does not necessarily mean studying all the religions and then choosing one of them. It is impossible. So we should consider some principles for each choice:

Now what is “the divine religion”? When there is one God, one universe, one mankind, one life, one death, and one life after death, how many religions should exist? “Wisdom” confirms that the base of all divine religions is the same. The revelation clarifies this meaning too:

The difference among religions is because of their laws not the base of it. For example in one religion the law for prayer, fasting, and the Kiblah is something and in another religion its law is something else.

Now we can identify the main principles of divine religions by wisdom which are “monotheism” and then “the Resurrection Day” (belief in retuning back to Him). So in divine religions, we can refer the definition of God to the wisdom. Does wisdom confirm that God is not the creature, or that he is a phenomenon, created by someone, restricted, mortal, incapable, and someone who has no dualism, associate, or instance? Or does wisdom confirm the following belief:

He has sons. He has daughters. He Himself was born. He bears. He is the Father, the Son, and the Holy Spirit at the same time. His hands are fastened. He forgets. He has regretted to create human beings. He comes to the earth and loses the believers’ house. He leaves His creatures after the creation and does not guide them and leaves them alone. He was crucified by the ones who created Him!!

And whoever desires another religion than Islam, it shall not be accepted of him; in the next world he shall be among the losers. (Surah Ali Imran, verse 85)

Someone studies all invalid religions, doctrinaires, and theories to accept a truth by denying them. He acts the same way as someone who calculates all the numbers to answer 2*2 and concludes that all the numbers are wrong and that only 4 is the correct answer. But wise people first learn the numbers and the four main calculation functions.

Above, we mentioned all man made religions are invalid because they are from humans. What about divine religions? If someone reads the first two pages of the Holy book and reads Surah Hamd (the first chapter in the Quran) too and thinks about it, the truth will be clear to him. He accepts the truth unless his brain does not work properly, and/or that his heart’s doors are closed, and/or that he wants to obey his desires. Then there is no difference for him to study and research about religion or not. No arguments and reasons can change his opinion and his slogans are according to his desires.

Have you seen him who has made Gods of his own desires? Would you be a guardian over him? (Forghan, verse 43)

Why did God create me to sin and then send me to hell?