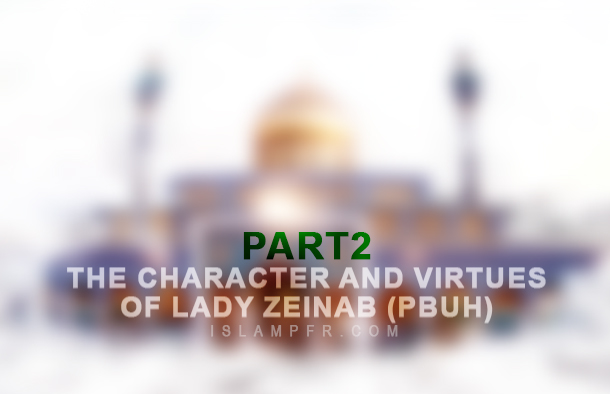 The Character and virtues of Lady Zeinab (PBUH) – Part 2

Her wise speeches and sermons, supported by the Quran verses, in Kufa, in the mansion of Ubayd Allah Ibn Ziyad and in the court of Yazid, all testify to her knowledge. Ibn Abbas has narrated the high valuable speech of Lady Fatimah (PBUH) about “Fadak” from Lady Zeinab (PBUH) and he has said: “Our Aqilat”, Zeinab bint Ali, said:…. (14) In addition to this, her teaching and interpreting of the Quran, for women of Kufa at the time of Imam Ali’s government, shows her knowledge. (15)

Lady Zeinab (PBUH) was in the position of narrating hadith, so that Muhammad Ibn Amr, Ata Ibn Sa’ib, Fatimah Bent Hussein and others have narrated hadith from Zeinab (PBUH). (16)

Lady Zeinab (PBUH) was filled with the knowledge. It is natural that who learned knowledge in presence of Prophet (PBUH) (the city of science) and Imam Ali (PBUH) (its gateway) should have the sea of science.

Consequently, Lady Zeinab (PBUH) was “Aalematun Ghairo Mualemah” so that her argumentation in Kufa and Levant in front of the enemies was like her mother’s argumentation, Lady Fatimah (PBUH), about “Fadak”.

Lady Zeinab (PBUH) was aware of the Prophet’s prayers and meditations and also of Imam Ali and Fatimah’s worshiping. She had seen Imam Hassan’s praying at nights and days. She had observed Imam Hussein’s praying, especially in the evening and the morning of Ashura. Each of them was a worshiping lesson or pattern for her.

Lady Zeinab (PBUH) would worship God at night. In her lifetime, she never quit praying so that she was called “Abida Al ‘Ali”. (18)  She never abandoned her vigil, even at the nights of tenth and eleventh of Muharram. Fatimah, the daughter of Imam Hussein (PBUH) has said:

At the night of Ashura, my aunt was worshiping God continuously; she was praying and praising and her tears flowed steadily. (19)

My aunt, Zeinab, did her obligatory and recommended prayers steadily during the captivity, from Kufa to the Levant. In some places, she would say her prayers while sitting due to her weakness and hunger; since she divided her rations among children and her power was lost. (20)

Lady Zeinab’s relation with God was the way in which Imam Hussein (PBUH) said to his sister on the Ashura day:

One of the important duties of women in Islam is wearing Hijab. In the Quran, there are some verses (22) which point to the necessity of Hijab for women and in fourteen verses (23), it alarms us about modesty and chastity. Also there are many hadiths which emphasize this subject.

Aqilat Bani Hashim, was like her mother, Lady Fatimah (PBUH), in Hijab and decency and she paid a lot of attention to this subject. Before the Ashura and their captivity, no male out of kinship had seen her.  As it is said in history:

When she would go to go to the Prophet’s grave, Imam Ali (PBUH) asked her to go at night. He asked Imam Hassan and Hussein (PBUH): “Accompany your sister”. Hassan (PBUH) was in front; Hussein (PBUH) at the behind, and Zeinab (PBUH) moved in the middle. They were sent, by Imam Ali, to turn off the light of Prophet’s tomb so that no male out of kinship would see her. (24)

Yahya Mazani says: “In Medina, I was the neighbor of Imam Ali (PBUH) for a long time. By God, in this period I never saw Lady Zeinab nor heard the voice of her (PBUH). (25) Her Hijab and decency was in a way in which Allama Mamaghani has said:

“In Hijab and decency, she was unique. No man, except her father and brothers, had seen her until Ashura.” (26)

In Islam, patience has a high position. The Quran gives glad tidings to those who patiently persevere. (2: 155) The relation of patience to faith is similar to the head for the body. Lady Zeinab (PBUH) is the best sample of patience and resistance. Patience and resistance in the guarding the boundaries of religion and humans dignity are the obvious features of this great Lady.

Everything comes to him who waits.

Her wonderful patience and resistance have surprised everyone. When she was 5 years old, she faced sorrows. She saw her loved ones’ sorrow one after another, but she was patient and stable against all of them.

Lady Zeinab (PBUH) was unique in patience and resistance. It suffices to say about her patience that when she saw the bright and bloody body of her brother, Imam Hussein (PBUH), she looked at the sky and said:

“Oh Lord, accept this little sacrifice, who is killed in Your way, from us (The Family of The Prophet)”. (27)

These words are uttered at the time when her brother and sons were killed and show her strong faith, stability of belief, and self-devotion in God’s way. (28)

Lady Zeinab (PBUH) was under the attention and training of the Holy “The Five” (the Holy Prophet (PBUH), Imam Ali (PBUH), Lady Fatima (PBUH), Imam al-Hassan (PBUH) and Imam al-Hussein (PBUH)) ; so she had gained such a great spirit that she could indescribably tolerate the martyrdom of her loved ones.

It is true that Lady Zeinab (PBUH) cried and moaned in some cases in Karbala, but she had two reasons for her crying:

In some cases the sorrow was so great, like the martyrdom of Ali Akbar (PBUH). Because he had a great dignity and he was the most similar person to the Prophet (PBUH) both in face and character.

So the martyrdom of Ali Akbar (PBUH) and the sorrow of his loss was so great and backbreaking which even now burns our hearts and boils our affection. Crying in such a great sorrow is not in contrast to patience.

The second case for her crying in Karbala, Kufa and the Levant was when she was wanted to do her great task and goal i.e. conveying the Ashura’s message. She guarded the Ashura uprising in various ways, especially with sermons, fiery speeches and heart-rending cries.

One of the great features of Lady Zeinab (PBUH) is “courage”. Undoubtedly, if there had been a little fear of tyranny of Yazid in her, the Ashura uprising would not win in such a way.

Lady Zeinab (PBUH) was unique in this feature. Her fiery and revealing sermons against the Umayyad dynasty, her rousing speech in defending the Ashura uprising and her unparalleled strength in Kufa and the Levant, all of them represent her courage and heroism. “Zeinab shines in Islam as the brave woman in Karbala and the courageous messenger of martyrs’ blood.” (29) Her jihad and defense of Islam and religion has become sublime.

Lady Zeinab (PBUH) showed a special courage in the Ashura uprising. She saved Imam Sajjad’s life (PBUH) several times, especially in the mansion of Ibn Ziyad. After the sermons of Imam Sajjad (PBUH), Ibn Ziyad ordered his men to kill him. Lady Zeinab (PBUH) hugged his nephew’s neck tightly and said: “Until I am alive, I will not allow you to kill him.” (30) She never paid attention to Ibn Ziyad and Yazid ibn Muawiyah. While they were at the height of authority, and the guards with unsheathed swords surrounded her, but she sermonized and decried Yazid and his forces.

The courageous Lady of Karbala had inherited eloquence and oratory from her respected father and mother. “When she was sermonizing, it seemed that her father was speaking.” (31) Her sermons in Kufa, in Yazid’s court and Ubaydullah Ibn Ziyad was similar to Imam Ali’s sermons and “Fadakie” sermon of Lady Fatimah (PBUH)”. (32) These sermons were uttered while she saw many disasters not to mention her thirst, hunger and sleeplessness, she also carried the burden of children’s protection.

When Lady Zeinab (PBUH) sermonized an eloquence and fiery sermon in Kufa, people bit their hands and looked at each other surprisingly! Meanwhile an old man started to cry so much that his beard got wet, he raised his hands and said:

In addition to her features and virtues of her character which she inherited from the family of revelation, she had a great role in the consequences of the Ashura uprising. After the Ashura, along with protecting the captives and Imam Sajjad’s life against dangers, she could gain the final victory of the Ashura uprising by enduring much suffering. She resisted firmly in doing her duty and completed it well, in order not to let Prophet’s teachings and Karbala revolution get distorted.

The Character and virtues of Lady Zeinab (PBUH)- Part 1