The character and virtues of Hazrat Ali Akbar (PBUH) 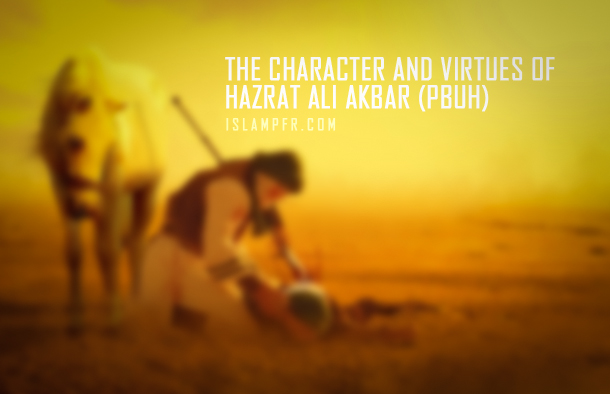 The character and virtues of Hazrat Ali Akbar (PBUH)

The first martyr in Karbala from generation of Abu Talib (PBUH) is Hazrat Ali Akbar (PBUH). His father is Imam Hussein ibn Ali, his mother is Lady Layla the daughter of Abi Murrah bin ‘Urwah bin Mas‘ud al-Thaqafi. He went to the battlefield declaiming:

“I am Ali the son of Hussein ibn Ali، I swear to the Lord of Kaaba, we are the closest family members of Muhammad (PBUH), and I swear to Allah that the son of a strumpet woman (Muawiyah) won’t govern us.”

(History of the Prophets and Kings, vol.3. The Publisher: Dar-ol-Kotob Elmiyah.)

The most similar person to Prophet Muhammad (PBUH):

One of Hazrat Ali Akbar’s (PBUH) eminent virtues is that Imam Hussein (PBUH) described him  as follows:

“Ali Akbar is the most similar person to the first being of the world, the Great Prophet (PBUH) and this virtue illuminates his eminent dignity to everyone.”

“When Ali ibn Hussein went to fight with enemies, Imam Hussein wept and said: “O God, be witness to this event (these people), because a young man went for fighting, who is the most similar person to your prophet.”

“Tolerate my dear,  today will not end, until you are satiated with your forefather- Prophet Muhammad’s (PBUH) bowl (he will give you water).

Hazrat Ali Akbar fought till the arrows torn his throat.

While he was rolling in his blood, he called out: “Dear father! Peace be upon you, this is my forefather, God’s prophet, who sends his regards to you and says: Hurry up and come to us”, then got martyred.

Abu Mikhnaf also narrates another phrase in this regard:

Hazrat Ali Akbar (PBUH) had the most beautiful face and the best character. [when he was going to the battle field] Imam Hussein’s (PBUH) eyes became full of tears and said: “Oh Allah!  Attest that a young man went to the battle field who is the most similar person to your prophet regarding his appearance, moral characteristics and speech. Whenever we desired to visit your prophet we looked at Ali Akbar.

(Maqtal al-Husayn. The publisher: Al-Elmiyah Publishing. This has been narrated in some other books as well.)

Similarity to the Islam’s Prophet in every aspect:

Hazrat Ali Akbar is, facially, the most similar person to the Prophet (PBUH). There are some narrations about the beauty of the Prophet’s (PBUH) face. Ibn Hajar Asqalani writes in Fath al-Bari:

Abu Hurairah said: “I have never seen anyone better and more beautiful than Allah’s Prophet (PBUH), it seems that the Sun can be seen in his holy face.”

Abu Ishaq says: “I asked a woman who had already seen the prophet in hajj to describe his face.” She said: “The prophet’s face is like the full moon and I’ve never seen anyone like him before and after that” and Rabi, Mas’ud’s daughter, narrates: “If someone sees the Prophet (PBUH), in fact he will see a glittery Sun”.

And Ibn Kathir, on a comparison between the beauty of Joseph and the Holy Prophet (PBUH), writes:

“If someone meets the Prophet (PBUH), in fact he will see a glittery Sun”.

This was just a brief description of Prophet Mohammad’s (PBUH) beautiful appearance and as it was mentioned earlier, Hazrat Ali Akbar is the most similar person to the Prophet in appearance, hence the indescribable beauty of Hazrat Ali Akbar (PBUH) is discerned.

But the second similarity of Hazrat Ali Akbar to Prophet Muhammad (PBUH) is that he is the most similar person to the Prophet (PBUH) regarding morality, behavior and gesture.

The Almighty God says about the ethics of Prophet (PBUH) in the Holy Quran:

Sunnis scholars write about this verse:

This explanation is due to the fact that no one’s attitude is better than the ethics of Prophet Muhammad (PBUH).

Allah says in another verse:

Or in another verse, the Prophet is introduced as a good role model: “Ye have indeed in the Messenger of Allah a beautiful pattern (of conduct)” (33:21)

Yet we know there are many aspects of good morals. The person who has the best ethics, in a way that he is a blessing and a model for the whole world, is at the highest level in all moral attributes. However the most similar servant of God to Prophet Muhammad (PBUH), is Hazrat Ali Akbar. This means that like his noble ancestor, he has the highest position of virtue and is the source of blessing and model for people of the world.

The third similarity of Hazrat Ali Akbar to Prophet Muhammad (PBUH) is in terms of speech and utterance.The most important feature of the Prophet (PBUH) is that he never spoke based on personal desires, and Almighty Allah praises His Prophet as follows in the Quran:

Accordingly, Hazrat Ali Akbar (PBUH) is the most similar person to Prophet Muhammad (PBUH) in terms of speech and utterance.

The status of Hazrat Ali Akbar (PBUH) was so high that even the enemies of Ahl al-Bayt (Peace Be upon Them) confessed that.

According to the resources of Shias and Sunnis, when Imam Hussein (PBUH) became aware of his son’s martyrdom, he came out of the tent and went bedside his son, and as he wept and shed tears, said: “May, God kill your murderers, how these shameless people rebel against God, and how they disrespect the Prophet of God.”, and as tears shed from his eyes said: “After your martyrdom, pity be on the world.”

Hazrat Ali Akbar (PBUH) has many virtues that certainly it does not fit in this brief article and we explained only a part of his dignities.