Blessing the shrine of the Prophet and the saints 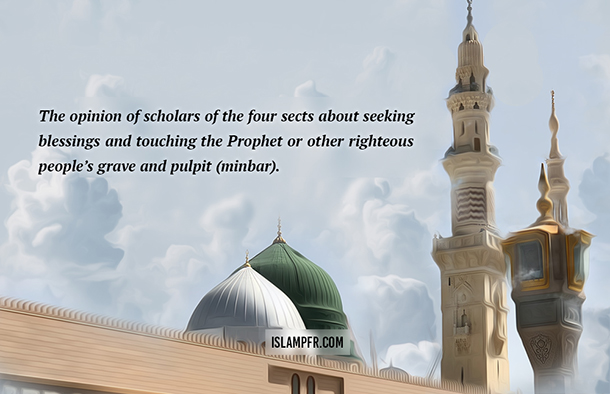 Question: The opinion of scholars of the four sects about seeking blessings and touching the Prophet or other righteous people’s grave and pulpit (minbar).

In this regard the opinion of the four Sunni sects shall be the best response to this question by the Wahhabis and proves that the act of seeking blessings from the graves of the righteous people is not a Shia heresy and invention. Basically you need to know that the scholars of the four Sunni sects approve the act of seeking blessings or touching the Holy Prophet’s (PBUH) pulpit or the righteous people’s graves. As Allameh Amini after many years of research says: I do not know any scholars who have well-known stances among the four Sunni Muslim sects that deem this act as forbidden, and even a few of them who disapproved this act, have disapproved it as a suggestion, and have not forbidden it. They assume it as makruh (abhorrent but not forbidden) because they supposed that approaching near the Prophet’s holy grave is an impolite act. Thus they think one should pay respects to the holy grave from a distance. (Al-Ghadir – Abdulhussein Amini, Vol. 5, p. 146)

Therefore, the scholars of all sects, even Ahmad Ibn Hanbal, the chief scholar of the Hanbali sect that Wahabis claim themselves to be his followers, deem the act of seeking blessings as allowed.  Abdullah, the son of Ahmad Ibn Hanba,l says ‘I asked my father: what is your decree about seeking blessings from the Allah’s Messenger’s pulpit or his holy grave by touching and kissing it?  My father replies that: There is no problem with that.’ (Wafa-AlWafa, Vol. 4, p. 217)

The reason for allowing this act is the tradition of the Holy Prophet’s Ahlol-Beyt and his companions during his lifetime and afterward. In the Book of ‘Sehah va Masanid’ there are plenty of quotes about the Holy Prophet’s (PBUH) companions seeking blessings from his relics, for example his clothes, the water the Prophet used for his Wozu, his water bowl and such, which clearly verifies that this act is permissible and admirably approved. For instance, Bukhari in his Book of Sahih Bukhari has narrated a lengthy quote in which some of the particularities of the Prophet and his companions have been mentioned and says that: ‘Whenever the Prophet was performing Whozu, Muslims almost started fighting to obtain the water the Prophet used for his Wozu. (Sahih Bukhari, Vol. 1, p.49, H 189)

Navavi also states in his book that: it has been quoted from Omme-Sabet who said; The Prophet (PBUH) came to my place and while he was standing he drank water from the hanging water-skin. I stood up and cut off the opening of the water-skin.

This hadith (quote) has been related by Tarmazi who confirms the authenticity of it, saying »It is true and accurate«. Navavi says Omme-Sabet cut off the opining of the water-skin to keep it and seek blessings from it. (Yahya Ibn Sharaf-Oddin Navavi Shafe’ee, Riaz Al-Salehin, p. 254, section 110, H 764)

It has also been narrated that: the servants in Medina went to the Prophet with bowls of water at the time of Morning Prayer. They went to him and he inserted his hand into the bowl of water despite the cold weather in the morning. (Sahih Moslem, Book of Alfazael, Chapter 19, Ghorb-ul-Nabi, p. 1812, H2324 ; Mosnad Ahmad, Vol. 19, p. 393)

People sought blessings from the Holy Prophet’s relics after his demise.  It has been quoted in the Sunni resources from Imam Ali (PBUH) that he said:  After the burial of Allah’s Messenger Lady Fatimah (AS) attended the grave of the Prophet and took a handful of the soil from the grave and put it on her eyes and wept, then she said ‘Whoever has been privileged to experience the fragrance of the soil from Ahmad’s grave should not smell any other scent. Adversities inundated me such that would make daylight become dark if afflicted.’ (Hussain Dyar Bakri), Tarikh al-Khamis, Vol. 2, p. 173; Abdullah Ibn Saeed Ebadi, Montaha Al-so’ul Ala Vasa’el Al-Vosul, Vol. 4, p. 317)

For example, Zarkeshi says:  »The soil of Hamzah’s grave has been exempted from the ruling that prohibits taking the soil of the two Harams; because everyone has confirmed that this soil is the healing for headache«. (Wafa-AlWafa, Vol. 1, p. 60). It has also been quoted from the Holy Prophet that » the dust of Medina cures leprosy «.  (Wafa-AlWafa, Vol. 1, p. 60, Kanz-ul-Ommal Vol. 12, p. 236). Ibn Athir has quoted from the Prophet that    I swear to the One who has my life in his hands that the dust of Medina is the cure for any pain« .  (Jame’ ol-Osul Ibn Athir, Vol. 9, p. 334)

In addition to the Sunni theoretical confirmation of this viewpoint, according to their behavioral instances and actions, the Sunni people attend to their renowned persons’ graves to seek blessings. Shamsuddin Zahabi Shaf’ee who is one of the scholars in the field of Biographical Evaluation of Religion Scholars (Rijal) says: A person took some soil from Sa’ad Ibn Ma’az’ grave and looked at it. Suddenly, he found it to be a musk. (Siar  A’lam-ul-Nobala, Vol. 1, p.289)

From the historic viewpoint, it has been substantiated that people took soil from the Holy Prophet’s and His Honour Hamzah’s graves, even from all over Medina, as blessings.

Therefore, Muslims and the followers of Ahl-ul-Beyt (the Prophet’s Descendants) kiss their holy shrines or touch the door or the wall with the purpose of paying their respects to Allah’s Messenger (PBUH) and their infallible Imams and also to demonstrate their undivided devotion to them, and that is their only reason and motive. It is precisely like when any Muslim kisses the cover of the Holy Quran to respect the book although the cover of the Quran is not the Quran itself. The cover could be an animal’s skin however it is kissed for the sake of what has been placed in between these two covers. Kissing the shrine, the ground and door or the wall of the shrine is exactly the same as kissing the Quran, and kissing the shrine is done with the purpose of respect to the person lying inside the grave because he is considered to be a pious servant of God and who is respectable. Muslims hold righteous people in high regard as their relics are respected and they believe that all have been created by God only and they are constantly in need of God in essence.  Now, the question is that why this belief could possibly be polytheism and heresy. Why Muslims and particularly the followers of Ahl-ul-Beyt have been harshly criticized and wrongly accused of polytheism and heresy although the viewpoint of all the other Sunni sects corroborate this tradition.

If you want to see the PDF file, click here

The land of seventy-two sects