Home Articles Who gets the benefit of the dispute between Muslims?
Articles 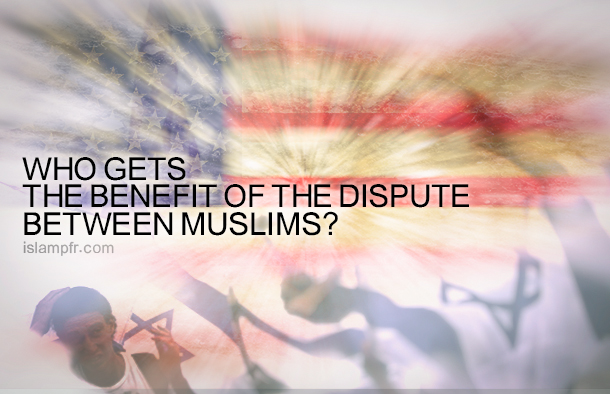 Since 2010, Middle East and East Africa have witnessed rapid and unexpected incidents and these incidents have affected the whole region. United States of America and Israel were trying to make the situation ideal for Israel so that nothing could threaten its interests.  Along with The Islamic Awakening other incidents also happened in the region which were directly or indirectly plotted by the United States, reactionary Arabs and Israel so they could weaken the Resistance Cores of the region.

With the evolution of the Islamic Awakening, many Islamic countries were involved in different complications that they were not expecting.  These problems which are caused by the activation of Takfiri groups of the region is planned by the United States, Israel and Saudi Arabia, could deviate the Islamic awakening from its original path and make peaceful Islamic countries such as Iraq insecure, to insure the safety for Israel.

Moreover, Syrian and Iraqi armies have always been a great threat to the Israeli army. But after fighting this war they are not a threat to Israel anymore. After the American army attacked Iraq, under the pretext of fighting terrorism and weapons of mass destruction, Iraqi army was almost disbanded. And now that the Iraqi army is trying to restore its strength after Saddam’s era, it is indulged in internal issues of the country caused by Takfiri groups and it will take longer for them to get back their strength, and right now they cannot concentrate on any other issues, like Israel.

Syrian army was once a constant threat to Israel. But after getting involved with fighting ISIS it lost its strength too and now it also needs time to restore itself.

In this regard, the United States, Israel, and Saudi Arabia are supporting the anti-Syrian government groups with money, weapons and other secret services. They are not willing to solve these problems by table talk. They are trying to suppress the Islamic revolution. Syria has been a main resistance core of the region and by repressing the Syria, they also want to weaken the other countries which are in Islamic resistance chain.

In this situation, it appears a new plot is being planned against Philistine people. They want to take advantage from the dispute among Muslims, so that the Palestinians would have to abandon their lands and Israel can occupy Palestinians’ lands more.

In conclusion, it should be noted that the secessionistic and expansionistic plans of Israel will affect all the countries of Middle East. The United States is trying to apply its plans, and trying to get power in this region so that it can practically and easily extend the Israel borders and can exploit the Middle East in much better way.