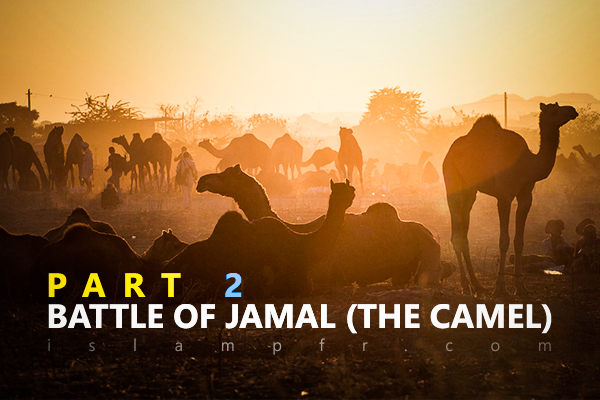 Battle of Jamal (the Camel)

The behavior of Imam Ali during the Battle

During the battle, Imam (PBUH) was behaving his enemies graciously and magnanimously, to the extent that it would make the most tenacious enemies, admire him. After the war, a group of enemies, among which was Marwān ibn Ḥakam, told each other: “we have oppressed Ali and broke our allegiance toward him for nothing; but when he won the battle, he behaved us in a way that we had not seen from anybody before, except the Prophet. Let’s go to him and apologize.”

When Ali decided to move toward Kufa (the Center of caliphate) after the battle, he ordered 40 women to wear men’s clothes and get armed and take Aisha to Medina. En-route, she was swearing Ali continuously that Ali has not respected the Prophet and his wife and is sending her to Medina along with men. When they reached Medina, one of the women, could not keep patience, came close and told her:

“Alas for you, Aisha! What you did was not enough? Now you are talking about Ali (PBUH) like this? Then other women came close and uncovered their faces. Aisha was ashamed when realized the truth and whispered ‘Inna Lillahi wa inna ilayhi raji’un (We indeed belong to Allah, and we indeed toward Him are returning)’ and asked God’s forgiveness for what she had done and said: ‘God grant him good reward, for he kept the respect of the Prophet”.

Imam Ali said about her:

“Her thoughts and complexities toward me, made her do all this and annoy me in a way that she would not oppress anybody else. However she will have her past respect in the future. God will judge our deeds and will forgive whoever wants and punishes whoever wants.”

Ali (PBUH) ordered Muhammad ibn Abu Bakr: “Take your sister to Medina, then join me in Kufa, as soon as possible.”

So he took his sister Aisha to Media.

Regret of Aisha, after the battle

After the war, Aisha was continuously repeating: “I wish I had died, 20 years before that event.”

Aisha said: “God bless Ali, he was righteous in fact…”

She repeatedly quoted this hadith from the Prophet: “God decreed, whoever fights against Ali, is unbeliever and will be placed in the hell.”

She said: “I wish I had mourned for 10 sons like Haris ibn-Hisham instead of accompanying Zubayr’s son [in that battle].

It is quoted from Ammara ibn-Omayr that someone had heard of Aisha and quoted him that: “Whenever she read this verse of Quran ‘And stay quietly in your houses…’ (33:33), she used to cry in a way that all over her veil became wet.”

It is quoted from Urwah that: “Whenever she remembered being in Jamal Battle, she would cry in a way that her veil became wet and said: ‘I wish I had been totally forgotten.”

It is mentioned in the book of Manaqib, quoted from Abu-atiq, that Aisha said: “Show me the son of Umar (Abdul-rahman), whenever he passes my house. When Umar passed, they informed her. She said: ‘O Abdul-rahman! Why did not you prevent me from that war?’ He answered: ‘I saw you are under influence of a man, whom you will never disagree [Abdullah ibn Zubayr was meant]. Aisha said: ‘If you had prevented me, I would never go to that battle.”

Many famous people visited Aisha after the battle. One of them was Qa’qa’ ibn Amr. During the visit, Aisha mentioned: ‘I swear to God that I wish I had died 20 years ago.”

Fath al-Bari, quoted from Muhammad Ibn Qays that: “Aisha [Once] recalled the battle of Jamal and said: ‘I wish I had stayed at home, just like others; it was more desirable for me than bearing 10 children from the Prophet and all of them were like Abd-ul-rahman ibn Haris ibn Hisham.

Disobedience of the Caliph

In the religious laws of Sunnites, disobeying the ruler and the caliph is not allowed, which requires a separate discussion, since Imam Ali (PBUH) was the caliph of the time. Here we mention just some issues in this regard:

The Prophet (PBUH) said: “He who disobeys the ruler and separates himself from the society [and passes away], is died like anyone who has died in ignorance era…”

Abuzar quotes from the Prophet (PBUH) that said: “He who separates himself from the society only a span, has broken his bond with Islam.

The Prophet said: “He who leaves obeying a ruler, will meet the God in the Day of Judgement, with no proof and whoever passes away with no allegiance covenant, is died like someone who has died in ignorance days.”

And numerous other references….