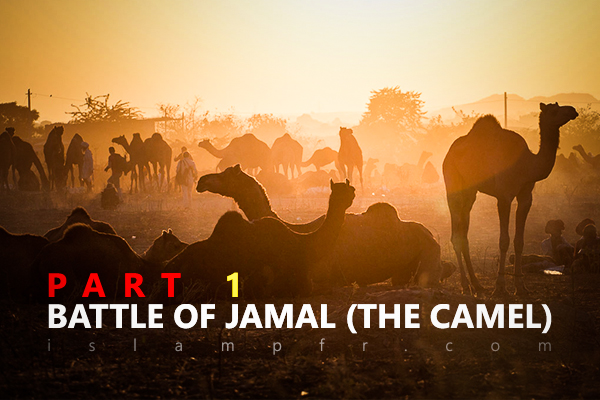 Battle of Jamal (the Camel)

Battle of Jamal occurred in November 656 A.D. between Aisha, Talhah and Zubayr in one side and Ali, the ruler (Caliph) of that time, on the other side. It was the first war between Muslims and is named “Jamal” (male camel), because Aisha was on a camel named ‘Askar’ in the middle of the field.

The pretext of this war was taking the revenge of Uthman’s murder; Aisha blamed Ali as the reason of the murder of the third Caliph.

Prediction of the Event by Prophet Muhammad (PBUH) and his Warning

The prophet (PBUH), came out of the house of Aisha and said: “The horn of the Devil will appear here.

After quoting this narration, Haythami says:

“This narration is quoted by Ahmad, Buzar and Al-Tabarani; which are trusted.”

When Aisha decided to disobey Imam Ali (PBUH), they looked for a camel to carry her camel-litter; a man named “Ya’la ibn Umayya” brought a camel for her, named “Askar”, which was strong and able to carry the litter. Aisha saw the camel and liked it. The owner describe the strength of his camel and named the camel as “Askar”. When Aisha heard the name; trembled and whispered “Inna Lillahi wa inna ilayhi raji’un (We indeed belong to Allah, and we indeed toward Him are returning)” and said:  “Take this camel away, I don’t need it”. When her army asked the reason, she said that the Prophet (PBUH) had told her the name of this camel and advised her not to ride it. Then ordered to find another camel for her. People looked for, but could not find another camel, able to carry her litter; so changed the appearance of the camel and brought it back. They told Aisha: “We brought a stronger camel for you”; then she became satisfied and accepted it.

After mentioning this event, Ibn Abi’l-Hadid quotes another event from Abu-Mikhnaf that on the way to Basra (for the battle), Aisha and her army arrived at a village called “Hawab”; the dogs of Hawab were barking at their army, in such a way that their camels stampeded.

A person from her army said: “Hawab has so many dogs and they make a lot of sound’. Aisha stopped her camel and said: ‘Is this place Hawab and are these the dogs of Hawab barking? Return me right now; the Prophet told me to beware the day that the dogs of Hawab are around me and barking loudly!’ At the moment, in order to dissuade her of return, someone said: ‘God bless you; it’s a while that we have passed Hawab.’ Aisha said: ‘do you have any witnesses?’; then they gathered 50 Bedouins and bribed them to testify that the place was not Hawab and they had passed it; then Aisha accepted it and continued toward Basra.

The manner of Imam Ali (PBUH), before the battle

In order to prevent the war, ImamAli (PBUH) sent more than 10 messengers and letters to the opposing army.

Ali (PBUH) wrote a letter to the commanders of this group (who later were named Nakesin) at Dhi Qar and mentioned the great sins they had committed in Basra, such as killing Muslims and torturing Uthman ibn Hunaif and asked them to stop opposing and to join other Muslims. He sent this letter to Talhah, Zubayr and Aisha by one of his followers named Sa’sa’a bin Sohan; but the letter did not change their mind. They were determined to wage war.

Next time, Imam Ali (PBUH) sent Ibn-Abbas to remind them the allegiance covenant they had with him.

In another letter, in order to attract the enemies, he called Talhah, “Sheikh ol-Muhajirin” (The elder of Muhajerin) and called Zubayr as “The Unique Rider of Quraysh”

In other occasion, Imam sent the well-known companion of the Prophet, Qa’qa’ ibn Amr to the army of Nakesin, who could to some extent convince them toward peace. When the report of his negotiations was told to Imam, he was surprised of their resistance and sent another letter to them, by Imran ibn Husain as the messenger.

In another case, Imam sent Ibn-Abbas to negotiate with Zubayr, hoping to attract him, since he had tendency toward Imam. Once more Imam sent Abdullah ibn-Abbas and Zeyd ibn Suhan (whom the Prophet had testified will go to heaven) to Aisha hoping that their esteem would make her remorse; but Aisha in reply to their reasoning, advice and Benevolence said: “I won’t reply Ali anymore, since in reasoning, I’m not as skillful as him.”

Another time, Imam gave a Quran to Ibn-Abbas and told him to remind them, their allegiance covenant and ask them to accept the holy Quran as the arbitrator. But they replied: “we have no answer but the swords”. Ibn-Abbas took their answer to Imam and said “They will not reply you with anything but the sword, so attack them. Before they attackyou.”

Once more, Imam apeared between two armies, unarmed, riding the horse of the Prophet and called Zubayr. Zubayr came full-armed and stood in front of him. They hugged each-other. Then Ali told Zubayr:

“Do you remember that once you and the Prophet were passing by me? The Prophet smiled at me and I also smiled at him. At this moment, you told him: ‘O the prophet of God! Ali won’t stop bragging’. Then the Prophet replied you: ‘Zubayr! Be quiet! He is far distant from bragging; but you will soon fight him and will be the tyrant one in the battle.”

In other occasion, in order to make peace, Imam told his followers:

“Who will take this Quran and call the Nakesin to it? Be informed that whoever volunteers, will be martyred and I guarantee the Heaven for him.”

A young man from Abd-ul-Qeys tribe, named Muslim, stood up and said: “I will present this Quran to them and will sacrifice myself for the satisfaction of the God”.

The man went and stood in front of the Nakesin Army and said: “This is the book of God. Amir al-Mu’minin calls you to this book.”

The Jamal (Nakesin) Army cut off his right hand in response. He took the Quran with his left hand. They cut off his left hand too. The man, while bleeding all-over, held the book with his teeth. At this moment, Aisha ordered the archers to shoot him.

Beginning of the Battle

When Imam Ali was preaching his followers, the rain of arrows by the Nakesin archers was shot toward them. The followers, who could not bear this-much munificence, tenderness and mercy, shouted: “O Imam, the bows of the enemy massacred us.”… Some of the followers were martyred in the tents, but Imam was still advising to be patient. Shortly after that, Abdullah ibn Badil, the famous companion of the Prophet, put the body of his brother, who had been martyred by the arrows, on the ground, in front of Imam and said: “O Amir al-Mu’minin, this is my brother who is martyred”. At that moment, Imam was totally disappointed from guiding the Nakesin and came to the decision that every evidence is presented to them. So, despite his inner will, in order to protect his soldiers and to perform his duty, he got ready for the war.

It is said that in the day of Jam Imam gave their flag to his son, Muhammad ibn al-Hanafiyyah, but told him and others to wait until noon; perhaps some people of the other army would remorse. In the meanwhile, he was adjuring the nakesin and asking them to change their mind and turn to peace.