Did Umar, Abu Bakr, Usman and … participate in the failed assassination of Prophet Muhammad ᴾᴮᵁᴴ? 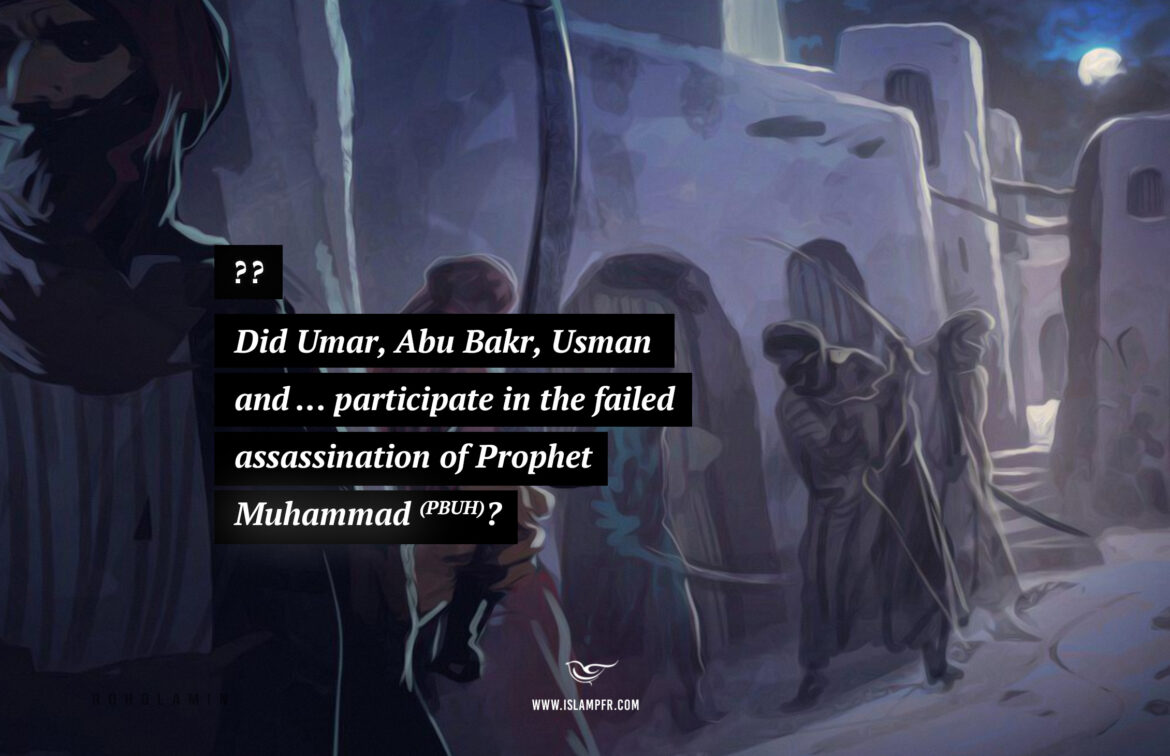 Besides the polytheists’ plan to assassinate the Prophet of Islam (PBUH) in Mecca, the event of attempted assassination of him on his return from the battle of Tabuk has been recorded in narrative and historical sources.

The summary of the event based on what is narrated in Sunni sources is as follows:

It has been stated in some souces that Huzayfah told the Prophet (PBUH): “O Messanger of God! Won’t you order to kill them?”, the Prophet (PBUH) said: “I don’t like people to say that Muhammad killed his own companions.”

It has been reported that the Prophet (PBUH) told to Huzayfah: “God has informed me their names and their fathers’ names and if God wishes, I will reveal their names to you in the morning.”

Based on some narratives, the Prophet (PBUH) told Huzayfah their names and ordered him not to reveal them.

However, it is not clear who those people were. Some of Sunni scholars like Ibn Hazm Andalusi who is one of the great Sunni academics has mentioned their names. He states in his book, Al-Mahli:

“Abu Bakr, Umar, Usman, Talhah and Sa’ad ibn Abi Waqqas (may God be pleased with them) decided to assassinate the Prophet (PBUH) and planned to fall him down from a mountain passage (al-‘Aqaba) in Tabuk.”

But Ibn Hazm stated that there is one problem with the narrative: Waleed bin Abdullah bin Jumay’a is mentioned in the chain of narrators. Thus, he believed the narrative was fabricated (mawzoo’a).

The words and comments of Sunni scholars of Rijal (academic evaluation of narrators) on Waleed bin Abdullah is presented now to see whether the opinion of Ibn Hazm is acceptable and worth considering or not.

And Ibn Sa’ad stated in Tabaqat Al-Kubra: “Al-Waleed bin Abdullah bin Jumay’a al-Khazaei is one of themselves and he is reliable (thiqah) and some narratives are narrated from him.”

One of the greatest Sunni scholars of Rijal, Dhahabi, states about Waleed bin Jumay’a in Mizan al-‘Itidal: “Ibn Moein and al-Ijli trusted him. And Ahmad and Abu Zur’ah said: there’s nothing wrong about him. And Abu Hatam said: his narratives are accepted.”

As a result, Waleed bin Abdullah bin Jumay’a is reliable, so this narrative is authentic (sahīh).

Of course, our aim is not to prove whether some of the companions participated in the assassination or not; however, the point was to scientifically examine the narrative which was narrated by Ibn Hazm Andalusi. In fact, it’s Sunni scholars who should explain why Ibn Hazm Andalusi has narrated this narrative and then rejected it injudiciously.

Did the Shias of Kufa martyr Imam Hussain ᴾᴮᵁᴴ?

What is going on in Iraq Part 2