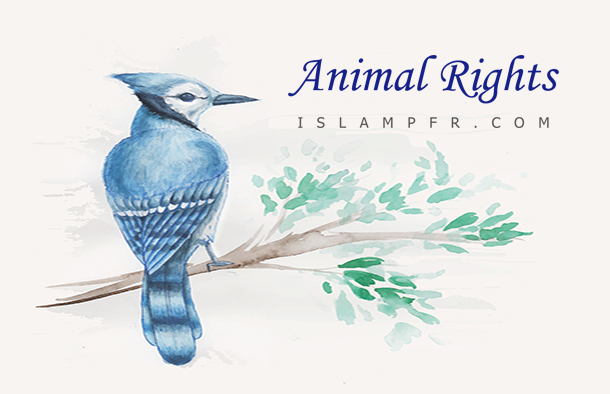 Humans, as the best creatures of all kinds in all established religions, have a special dignity and therefore have a lot of duties and responsibilities. However, it’s not only humans who have different rights, all creations on the earth such as mountains, seas, animals and plants have some rights. It has been a few years that there are some Animal Protection Organizations all over the world which have noticed the rights of animals and dealt with this issue. The first animal protection organization was founded in England in 1824, while in Islam many centuries earlier this issue had been dealt with utmost precision and delicacy in the Holy Quran and helping animals is considered as a good deed and cruelty toward them a sin. In addition to that we can find many instances in which the rights of plants have been mentioned in narrations and Hadith. You just need to open a book from the category of religious jurisprudence and take a look at the titles. The rights which Quran considers for animals include: the right to live, the right for food, health, shelter, justice, reproduction, respect, fair treatment, ownership, logical and proper application… Among others Imam Ali (PBUH) almost comprehensively and in a detailed way has dealt with such issues in his sermons and letters.

Imam Ali (PBUH) in a letter to one of his agents responsible for collecting alms as prescribed by Islam, besides emphasizing the observation of human rights, mentions the way animals’ rights should be observed:

Regulating the manner of getting in the circle of animals:

Imam emphasizes that we should not enter the circle of animals like he who wants to overwhelm and harm them:

Avoiding to separate the animals and their babies: in the same letter Imam recommends to his agent that in case the payers of alms tended to pay the alms of camels and sheep he act this way: “Do not separate the mother camel and her baby, and don’t milk it in a way that little milk is left for the baby”.

With regard to this issue, Imam says: if the animal is used for ridding, we shouldn’t wear it out. He also emphasizes the observation of fairness in treating animals: “Among that ridding camel and other camels establish a fair treatment and let the weary camel relax and ride the one which is less weary and ride it slowly.” He emphasizes on feeding, satiating and resting the animals.

Amir al-Momenin Ali (PBUH) paid attention to sick, weary or lame animals and interdict taking such animals as alms: since doing so requires moving the animal in long roads and certainly such an animal will be tormented all the time:

In a Hadith by Amir al-Momenin (PBUH) we read: “Do not slaughter sheep among other sheep and camels among other camels, while other camels and sheep see their kind being slaughtered.” It implies the fact that we should consider the animals’ feelings. He also emphasizes keeping animals: “The best thing that one can provide for his family is a sheep. He whoever has a sheep in his house, the angles of God will revere him twice.”

Some of the rights considered for animals in Islam:

The above quotation means that no one buys an animal unless the animal says: “O God! Put this person kind to me!”

According to Islamic rules humans can consume the meat, milk and other products of an animal and put them into service. But these things never permit insulting these creatures and neglecting their divine deference. A man went to the prophet and said hello to him, the Prophet (PBUH) replied him by saying “Hello to you” (addressed him in a plural pronoun). The man said: “O the messenger of Allah! I am not more than one person” the prophet said: “I said hello to you and your horse.”

It is foul that one beheads the animal which he has raised himself. Also if an animal takes refuge to one’s house we should not force the animal to go away unless the person does not have the ability to keep it. The Imam about a pigeon which had taken refuge to a person’s house said that the pigeon should not be eaten because it had taken refuge there and disrespecting and eating the pigeon was not right.

We should not sharpen the knife and other tools for beheading the animal in its presence because it understands this and suffers from this.

If we provoke an animal into doing something by fodder we should definitely give him the fodder during the time the action is being done.

With regard to vets and the owners of domesticated animals it is recommended that they not have solely profit making or financial aims and their jobs should not be just for pleasure in which the deference of animals is not observed. While in communism the animals and plants are considered just with regard to profit and personal gains and there is no deference for the nature. The nature and the environment face many dangers due to the trading rules.

Moslems are like this; they respect plants, animals and humans and do not damage the environment.

Imam Ali (PBUH) swore to Allah in his Nahj al-Balaghah that he wouldn’t accept the power as big as the Universe if that included taking a wheat seed from an ant’s mouth… this is the value of respecting animals’ rights in Shia branch of Islam.

It is recommended to use the nature, plants and animals but it is said that we should be moderate for instance we should not eat meat every day but this should not go on for forty days. Islam does not want us to stay away from meat but at the same time doesn’t want to witness that we destroy all animals and the nature for our profit, for example it is not right to encage a hen to lay eggs for us, and a hen should have the freedom to wander around in the nature…

Allah will admonish humans for all this, for places, the environment, humans, animals, things and birds… and humans will be asked how they have acted, if they had held any respect or not? Regarding plants, there are many recommendations in Islam. Regarding plants, the prophet asked the people if they respect their “aunts”, they wondered “aunts”? He said: “The grape trees and date trees are one’s relatives, and therefore you should be compassionate toward your aunts and plants.” In a Hadith by the Holy Prophet we read that if you have a sapling in your hand and you are at the verge of the resurrection and you have the mere time of planting it, plant it. The Grand Prophet was asked about destroying a tree and the quotation is that if someone (without any reason) cuts a Cedar Tree, Allah will put his head in fire.

In Islamic jurisprudence it is recommended to plant fruit trees and cutting fruit trees is reproached. This respect toward nature is to the extent that if there is no solid soil available for saying prayers we can use the leaf of a tree. This is why Shiites usually plant trees such as mulberry, date, walnut and fig on the roads to shrines and selling them is not good. Sometimes we help animals because of our own feelings which this doesn’t have a moral value but if we help an animal for itself and for the respect of life and nature this would be fit.