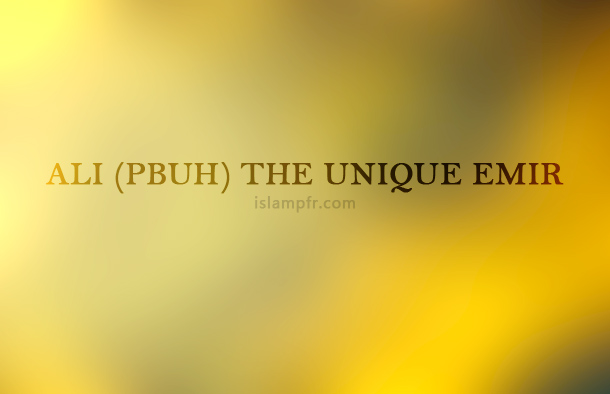 Amir al-Mu’minin (the commander of the faithful), Ali ibn Abi Talib’s (PBUH) characteristics are so many to be contained in a detailed book, so we choose and represent twelve of them; hoping that Shias and his followers exalt themselves and be thankful to the Generous Lord because of having such an inimitable master.

The reward of visiting Imam Ali (PBUH) during his life time and after his demise, is more than visiting other Imams. Because he, as the father and the first heir, is the other Imams’ instructor; hence, he who goes on a pilgrimage to his Shrine will collect rewards of other Imams and their Shias’ deeds.

Imam Sadiq (PBUH) said to a person who hadn’t gone to Amir al-Mu’minin’s (PBUH) shrine: “You did a bad thing.  I wouldn’t look at you if you were not our Shia. Why didn’t you visit the person whom God and His angels, Prophets and believers visit?”

That person told: “May my soul be ransomed for you, I wasn’t aware of that.” Then the Imam said:

“Be aware that Amir al-Mu’minin (PBUH) is far superior to other Imams for Allah and the rewards of their deeds are considered for him. While other Imams gain superiority for their own deeds.” [1]

Although Ahl-al Bayt are knowledgeable and erudite, this utterance was never heard from anyone but Imam Ali (PBUH): “Saluni”-ask me. [2]

By Allah! I know that every single verse that has been revealed during night or day, at desert or mountain, on land or sea, has been revealed on which day and at what time and about whom. There is not a man from Quraysh but his place in fire or light is specified in the Book [and I know it].” [3]

Radd al-Shams is a rare and supernatural event, that only has happened to Amir al-Mu’minin Ali (PBUH) and it means that the sun moved backward in its direction.

The first time Prophet’s (PBUH) head was on Imam Ali’s (PBUH) lap while the Prophet (PBUH) was receiving revelation and Imam Ali (PBUH) hadn’t said his afternoon prayer till the sun set. Prophet (PBUH) said: “O Lord, Ali (PBUH) was obeying Allah and His Messenger, return the sun to its pervious place for the sake of Ali (PBUH) (so that he can say his afternoon prayer).” The narrator says: “I saw the sun rose after it had set.” [4]

The second time Imam Ali (PBUH) and his companions were on a voyage to Babel and they were crossing the Euphrates River while the sun set. Then by Amir al-Mu’minin’s (PBUH) prayer, the sun returned to its position in the sky at noon with a tremendous sound and the Imam and his companions said their prayers and then it returned to the previous position. [5]

Imam Sadiq (PBUH) quotes from his holy fathers: “‘Abbas ibn ‘Abd al-Muttalib (Imam Ali’s (PBUH) uncle) and Nufel ibn Qa’anab were sitting in front of the Kaaba while Fatima bint Assad came and stood there and her pains of childbirth started and she prayed.

They say: “We saw the Kaaba crack from behind and Fatima entered there. And disappeared from our sights. The door was closed too. Then the cracks came together and stuck. We went to open the door so that women could get inside, but we failed. We understood it was done by God. Fatima stayed inside the Kaaba for three days and people kept talking about her everywhere. After three days, the same place cracked and Fatima came out. And Ali (PBUH) were in her arms. And she said: ‘I was eating heavenly fruits in these three days.’” [6]

“When the Wilaya (Succession) of Ali (PBUH) was revealed the Prophet (PBUH) asked his companions to greet Ali (PBUH) by the title of “Amir al-Mu’minin”. ‘Oh Zeyd! Of several affirmations Allah made to both of them (Abu-Bakr and Omar) on that day was that Prophet (PBUH) told them’: “Get up and greet Ali by the title “Amir al-Mu’minin”.” They said: “O, Messenger of Allah, is this order coming from Allah or His Messenger?”

Prophet (PBUH) said: “From Allah and His Messenger.” Then the Glorious God revealed this verse: “Fulfill the Covenant of Allah when ye have entered into it, and break not your oaths after ye have confirmed them; indeed ye have made Allah your surety; for Allah knoweth all that ye do.” [7]

Special and exclusive quotes by the Prophet like the Hadith of Al-Manzila (“You are to me like Aaron to Moses, except that there will be no prophet after me.”) and the gate of knowledge (I am the city of knowledge and Ali is its gate.) have been revealed only about Imam Ali (PBUH).

All Shia and Sunni narrators have consensus that the first male person who believed in Prophet Muhammad (PBUH) is Imam Ali (PBUH). (For further study see: “Ali (PBUH) the first Muslim”).

(see: “The man who sold himself to God”)

Imam Ali (PBUH), who led Muslims to victory at the Battle of Khandaq (trench) with his courage, was honored by a quote from Prophet Muhammad (PBUH): “Ali’s stroke at the day of Khandaq was superior to Thaqalayn’s (genies and humans’) worship.” [11]

Also in the battle of Uhud, while Imam Ali (PBUH) was moving in front of Prophet Muhammad (PBUH) and protecting him, all heard Gabriel’s voice from the sky: “There is no hero like Ali and there is no sword like Dhu’l-Fiqar” [12]

Al-Shaykh Al-Mufid says: “Ali (PBUH) had many fights and confronted warriors of Arab and their grandees and they struggled and used any tricks, hoping to overcome him. Yet he never fled from the enemies and never left the battle and never gave up and wasn’t afraid of anyone, though others sometimes prevailed over their enemies and sometimes were defeated, and they sometimes attacked and sometimes fled from their enemies. Because Ali’s (PBUH) behavior was as mentioned, his act was one of the miraculous and marvelous things exclusive to him and a reason for his Imamate and leadership and the reason why he should be followed and why he is chosen from among other people.” [13]

It is written in “Tarikh Al-Yaqubi”:

When Ali ibn Abi Talib (PBUH) brought Lady Fatima (PBUH)- Prophet’s (PBUH) daughter- to Medina, he hadn’t been married with her and two months after the migration, the Prophet (PBUH) married Lady Fatima (PBUH) to him. [14]

Obviously, Lady Fatima (PBUH) had many suitors. When Abu-Bakr and Omar approached Prophet (PBUH) for her hand in marriage, the Messenger of Allah (PBUH) said he was waiting for Divine Justice. [15] When Imam Ali (PBUH) asked Prophet (PBUH) to marry Lady Fatima (PBUH), the Messenger of Allah (PBUH) accepted and when some people objected this decision, he said: “I didn’t marry Fatima to Ali, but Allah married her to him.” [16]

I just mentioned a vignette of the myriad of expatiations

Try to understand the whole details from my brief description yourself …