Home Articles Why was Imam Ali (PBUH) born inside the Kaaba?
ArticlesShia in non-Shia texts 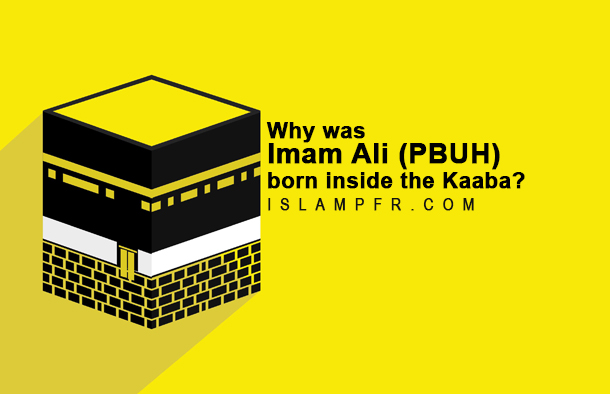 It is written in numerous references that: “Abbas ibn Abd al-Muttalib and some others were sitting in front of the Kaaba in the Masjid-al-Haram, when suddenly Fatimah Bint Assad came and stood there while she was struggling with pains of childbirth and prayed: “O my Lord! I believe in You and all Your messengers and holy books sent from You, and I acknowledge the words of my ancestor Abraham, the Khalil (the friend of Allah), who has built this Kaaba. O my Lord! For the sake of the person who built the Kaaba and for the sake of the baby I’m carrying, make my labour easy.”

Suddenly we saw the Kaaba cracked from behind and Fatimah entered there and disappeared from our sight. And the cracks came together and stuck. We went to open the door, but it didn’t open.

Soon, the news of this incident spread throughout the city. Three days passed and on the fourth day Fatimah came out from the same spot, having Ali (PBUH) in her arms. And she said: “The most exalted Allah has preferred me to previous women, and I went into His House and I ate heavenly fruits. And as I was going to leave the House, a voice called: “O Fatimah! Name this infant “Ali” because the exalted all-Highest Allah, says: “I derived his name from Mine and he is the person who breaks the idols in my House.” ”” (Mahallati, Seyyed Hashim,The life of Imam Ali (PBUH), Vol.1)

So, the story of the birth of Imam Ali (PBUH) is a truth which is confirmed not only by Shia but also by Sunni Muslims and is written in details in the precious book of “al-Ghadeer”.

But the secrets of the fact that why was Imam Ali (PBUH) born inside the Kaaba are expressed in some references, we mention some of them herein:

“Perhaps Ali (PBUH) wanted to return the favor of the Kaaba that made him honored to be born inside it, so, he destroyed the idols in Kaaba; because it is said in some references that the Kaaba complained to Allah and said: “O my Lord! How long these idols should be worshipped next to me?” And the most exalted Allah promised the Kaaba that this sacred place will be sanctified.” (Al-Ghadeer)

According to all mentioned before, some results are conclusive:

Firstly: the matter of the birth of Imam Ali (PBUH) inside the Kaaba is a certain historic issue that is narrated not only in Shia books but also in Authentic Books of Sunni Muslims that are all gathered by Allameh Amini in Al-Ghadeer, as mentioned before.

And also not only according to Shia scholars but Sunni scholars the story of the birth of Imam Ali (PBUH) inside the house of Allah (Kaaba) is confirmed by definite narrations.

Secondly: although all secrets of this matter are completely known for no one, it is clear in words of scholars of Shia and Sunni sect that this matter (being born inside the Kaaba) is a miracle and a glory for Imam Ali (PBUH) and it is a divine favor and grace which, according to the scholars of Sunni sect like Alusi, Hakim Neishaburi and others, is exclusive for Imam Ali (PBUH) and no one was born inside the kaaba before or after him.

And Imam Ali’s (PBUH) word which we mentioned before is more interesting that although prophet Jesus (PBUH) is a prominent prophet, his mother was ordered to leave the Beyt al-Muqaddas at the time of his birth, because it is a place for praying Allah, not a place for deliverance of a child; but at the time of Imam Ali’s (PBUH) birth, his mother, Fatimah Bint Assad, was guided into the Kaaba and was allowed inside it miraculously through the cracks on the wall.

But being born inside the Kaaba and martyrized inside the mosque, is a manifestation of his high and great place.