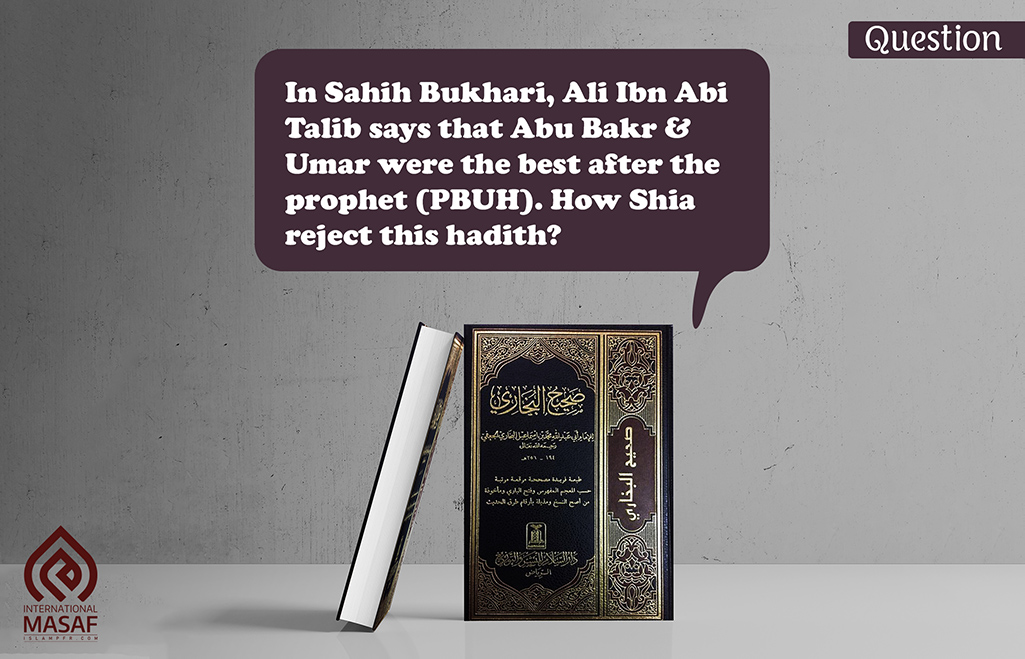 In Sahih Bukhari, Ali Ibn Abi Talib says that Abu Bakr & Umar were the best after the prophet (PBUH). How Shia reject this hadith?

There are a few Hadith in Sunni books that Ali Ibn Abi Talib considers the superiority of Abu Bakr and Umar more than himself, or as the best people after the prophet Muhammad (PBUH).

Let’s look at the source of these Ahadith and then compare with other Ahadith of Sunni books.

1- Hadith about Ali (PBUH) or from him should be common hadith between Shia and Sunni, or be found in Shia sources too or be Motawater, otherwise they are not acceptable.

On the other hand at least one hadith like these should be mentioned in Shia sources, but there is no one.

2- Everyone knows that prophet Muhammad never lies and his words are superior to all words even Ali ibn Abi Talib. So how that hadith can be acceptable when the prophet himself has talked about Ali’s superiority to all, over and over?

“if all trees become pens, and all seas become ink, and all Jinn (elves) become accountant, and all human become writer, they won’t be able to count Ali ibn Abi Talib’s virtues”

“The wisest nation after me is Ali ibn abi Talib, peace be upon him”

“Ali is with Quran and Quran is with Ali, and they won’t be separated…”

“O Ammar! If you see Ali goes to a way and others go to another way, you should go to Ali’s way and leave the others because Ali does not lead people to bad and inferiority, and he does not people astray from the guidance route”

There are several Hadith from the prophet in Sunni books about virtues of Ali ibn Abi Talib over all.

2- According to the Sunni sources, most of Sahabah (companions of the prophet) have confessed to the superiority of Ali Ibn Abi Talib over all. Such as al-Tirmidhi who has narrated from Aisha bint Abi Bakr that Ali ibn Abi Talib is the most precious one for the prophet.

Abdullah son of Ahmad ibn Hanbal ask his father about the superiority of Sahabah after the prophet. Ahmad ibn Hanbal name three Caliphs in turn. Then Abdullah say: so what about Ali ibn Abi Talib?? He answers: Ali is from Ahlul Bayt and nobody can be compared with him.

al-Dhahabi says superiority of Ali ibn Abi Talib is not Bid’ah because a group of Sahabah and Tabi’un (followers of Sahabah) believed in it. (Siyar A’lam al-Nubala by al-Dhahabi, V 16, P 457)

Ibn Hazm has narrated from a group of Sahabah and Islamic scholars that the best one after the prophet is Ali ibn Abi Talib.

Also Ibn Abd al-Barr, one of the greatest Sunni scholars mentions that a group of Sahabah knew Ali ibn Abi Talib as the first one who accepted Islam and he is superior to others.

3- Abu Bakr himself confess he is not superior or the best:

“I accepted your leadership while I wasn’t your best”

4- there are some valid and reliable narratives from Ali ibn Abi Talib in which he emphasize on his superiority. Ibn Abi’l Hadid narrates in Sharh Nahj-ul-Balaghah, V 10, Part 20, P 25:

Overall, it turns out that not only those hadith about superiority of Caliphs to Ali ibn Abi Talib have not reliable sources, but also they are in contrary with the reality!

When there are many authentic hadith from the prophet, Sahabah, Scholars and even Ali himself about his superiority to all, so just a few contrary statements cannot be acceptable. They are rejected by both Shia and Sunni sources.

You can read this article in Arabic.

Islam is the religion of lust. The Prophet of Islam married many women.