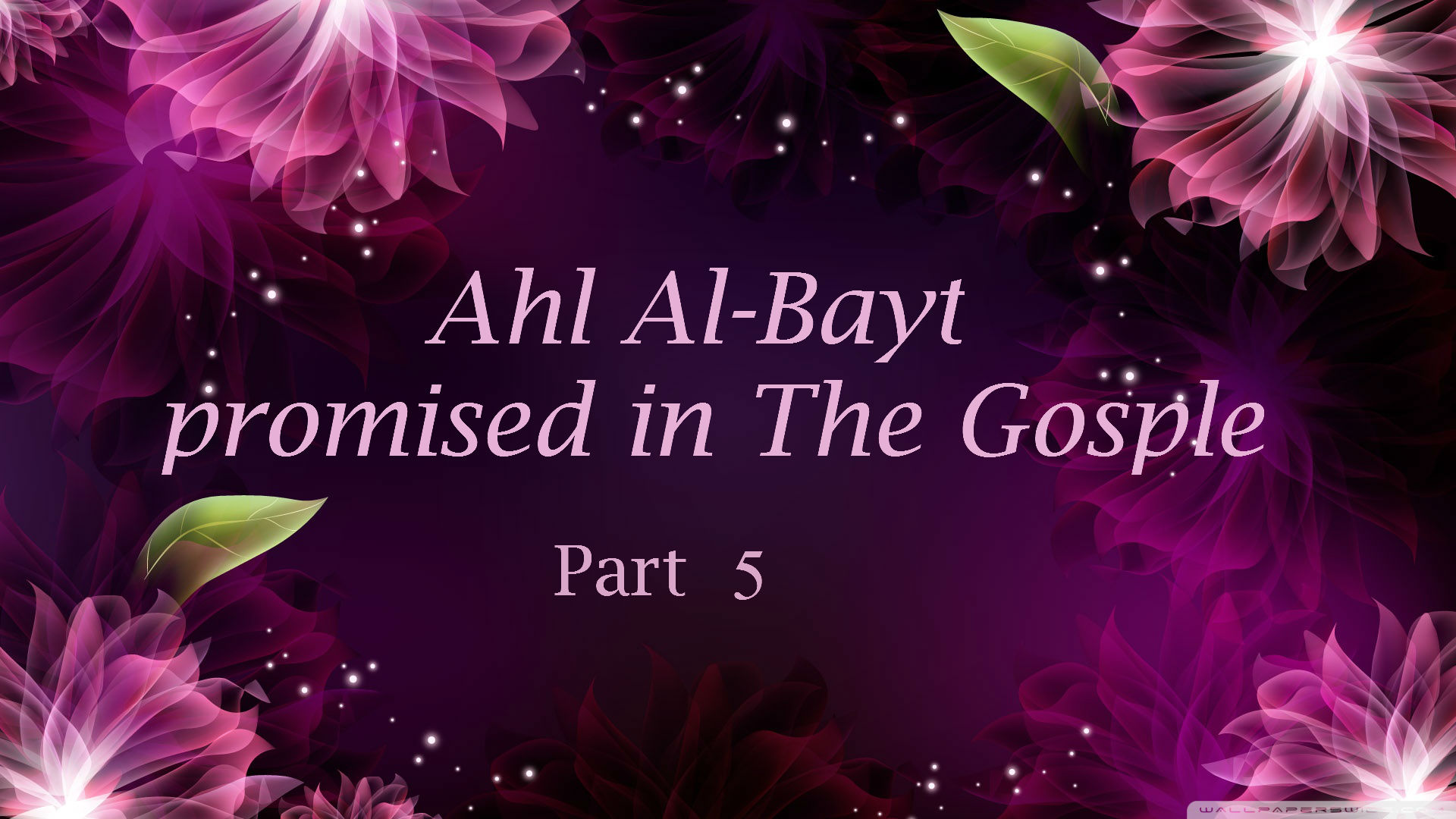 To obey or not to obey!

A vital point, sadly often disregarded by many, is that the human choice of not obeying Allah has many severe consequences, and that Salvation is ONLY attained through obedience.

The glorious and undeniable fact that Prophets of Allah, including Moses and Jesus (SBUT), had introduced and commanded the obedience of Mohammad and his Infallible AhlulBayt (SBUT) should be quite clear by now, that is for all sincere hearts. We cordially invite all followers of the current bible, i.e. the jews and christians, to think seriously in regard to submitting before Allah; for, it is stated in this very same bible that Allah will ask for, authoritatively, whether or not they obeyed the Promised Prophet:

We have already, in different writings in this site such as “Mohammad, the Promise of Torah” and “What the Bible says about Muhammad”, discussed some biblical statements of the Prophet Moses -Moosa- (SBUH) in which the Promised Prophet was introduced; and it has been proven without a shadow of any doubt that the Promised Prophet which was to be like unto Moses, was Mohammad and not Jesus (SBUT). It is also noteworthy to mention that Dr. Thomas McElwain in the introduction to his renowned book “Islam in the Bible”, in addition to all the reasons presented by scholars for this issue, has offered another thought provoking argument, and that is:

“The subject of Biblical prophecy as related to Muham­mad is widely dealt with by Ahmed Deedat, Abdul-Ahad Dawud, and many others. I have said little here in addition to such studies and left out much that has been said. I would only add something to Ahmed Deedat’s excellent handling of Deuteronomy 18:18, `I[God]  will raise up a prophet from among their brethren, like unto thee [Moses], and will put my words in his mouth; and he shall speak unto them all that I shall command him.’ Christians often claim that this refers to Jesus. But the parallel between Moses and Jesus seems inconsistent, since Christians claim Jesus to be God and deny such status to Moses. If Jesus is God, he is definitely not like Moses and the passage cannot apply to him. If he is not God, then the Christian doctrine falls.”

Let us also pay attention that the obedience of the Promised Prophet was commanded by God through the words of Moses (SBUH):

Deuteronomy 18:15 The LORD thy God will raise up unto thee a Prophet from the midst of thee, of thy brethren, like unto me; unto him ye shall hearken.

Then in the same book of Deuteronomy, statement 18:19, it is clarified that Allah will ask, authoritatively, for whether or not they obeyed the Promised Prophet:

18:19 And it shall come to pass, that whosoever will not hearken unto my words which he shall speak in my name, I will require it of him.

… Now, that we have explored certain biblical prophecies of the current bible, let us look at some authentic Islamic Hadiths in this regard.

Previously in this site, we have presented a writing titled: “Glad Tidings regarding the AhlulBayt in the True Enjil of ‘Eesa (True Gospel of Jesus)”, which we cordially refer our friends to. Here we are only going to narrate a quotation from the True book of Hadrat ‘Eesa (SBUH) which is also mentioned in the aforementioned writing:

“(In the name of Allah, the Compassionate, the Merciful)

Ahmad is the Rasool of Allah, his names are Mohammad and Yaasyn (and TaaHaa and Noon) and Khaatem and Haasher and ‘Aaqeb and Maahee. He is the Nabi [Prophet] of Allah, Khalil [Friend] of Allah, Habib [Beloved] of Allah, His Safi [Chosen One], (His Amin [trustworthy trustee],) and His Khiyarah [Appointee]. Allah has been observing his transfer inside the prostrating ones, meaning inside the backs of Prophets, (and has spoken to him in his Mercy, and whenever Allah is remembered, he is too;) he is the most honored creation of Allah and the most beloved by Him. Allah has not created any creation, neither a drawn near angel, nor a sent Rasool from Adam to others, more superior and beloved than him. Allah in the Day of Qiyaamat will sit him on His ‘Arsh [Throne of Power and Sovereignty], and accept his intercession for whoever he intercedes; in his name, the Qalam [Pen] flowed in Loh Al Mahfooz [the Protected and Guarded Tablet] in the Omm Al Ketaab [Basis and Essence of the Book]. He is Mohammad the Rasool of Allah. Then his brother is the possessor of the flag on the Day of Qiyaamat, the Kobra Mahshar [the Grand Day of Gathering]; he is the Prophet’s brother, Wasi [Executor], Wazir [Minister], and his Caliph [Successor] in his Ommah. The most beloved creation by the Almighty Allah after Him is Ali son of AbiTaaleb, who is the Wali [the Allah Chosen lord] of all believers, after him. Then eleven Imams from the offspring of the first one of the twelve, two of them are named like Haaroon’s sons, Shabbar and Shabyr [Hasan and Hosain in Arabic], and nine descendants of the younger brother, Hosain, will be one after the other. The last one is he whom ‘Eesa son of Maryam will stand behind to perform Prayer.”

As you, Allah-Willing, read “Glad Tidings regarding the AhlulBayt in the True Enjil of ‘Eesa (True Gospel of Jesus)” please also pay attention to the fact that the descendant of Sham’oon Safa -i.e. the descendant of the Allah Appointed Successor of Hadrat ‘Eesa (SBUT)- declared that the progeny of Sham’oon Safa had remained faithful to the True teachings of Hadrat ‘Eesa (SBUH); i.e. they were monotheists and had absolutely not followed distortions such as Trinity and thus never were polytheists. Any of them still living at time of Mohammad and his AhlulBayt (SBUT), in order to complete their belief, they had to profess Shahaadatayn, i.e. to bear witness to Uniqueness of Allah and to Prophethood of Hadrat Mohammad (SBUH&HA).

This is also exactly what Imam Mahdi’s mother (SBUT), who was a descendant of Sham’oon Safa (Simon Peter) and thus with correct monotheistic beliefs, did. This is a glorious fact that the forefathers and foremothers of Infallible Ones have always been monotheists. For this beautiful story, we invite our friends to read: “Melica’s heart story” in this site: kindfather.com

We also cordially invite our friends to read: ”Imam Mahdi’s (PBUH) Birth, Ascension and Rise, and the Revelation of John” in this site.