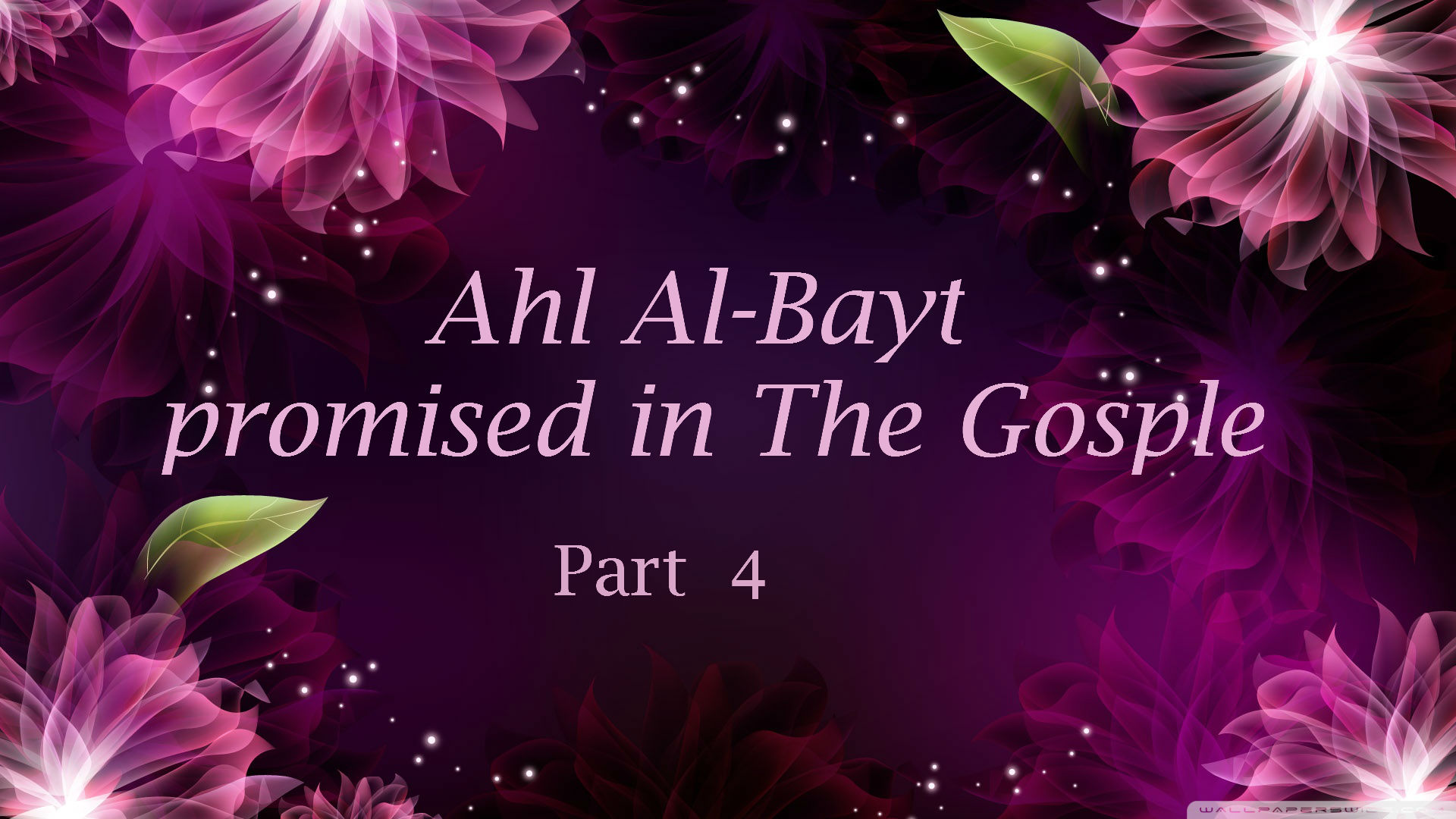 An issue observed is that according to the bible, the very Last Prophet of Allah coming after Jesus (SBUT) has been referred to as the TREE OF LIFE with TWELVE FRUITS.

Have you not seen how Allah sets forth a parable of Kalematan Tayyebatan (a Pure Word), (being) like a Pure TREE whose root is FIRM, and whose branch is in heaven? Yielding its FRUIT at ALL TIMES by the Permission of its Lord; and Allah sets forth parables for mankind, that they may be mindful.

Imam Baaqer (SBUH) in regard to this has said:

The TREE is the Prophet Mohammad (SBUH&HA); his lineage is FIRM in Bani (children of) Haashem, its stem is Ali son of AbiTaaleb (SBUT), and it’s branch is Fatemah (SBUH), and it’s FRUITS are the Imams (SBUT) from Ali and Fatemah (SBUT), and the leaves of this tree are the Shi’ah; when a believing Shi’ah passes away a leaf falls from this tree, and when a child is born, a leaf grows on it.

Let us also pay attention that according to verse 25 this TREE  yields its FRUITS at ALL TIMES, twelve Infallible Imams (SBUT) throughout the times until the end of times; may Allah hasten the Appearance of the last Infallible Imam (SBUH) … .

It is noteworthy to mention that Prophet Jesus (SBUH) told Bani (children of) Israel that Prophethood would be taken away from the nation of Israel, and thus the Kingdom of God would be given to another nation bringing forth the FRUITS:

Matthew 21:43 Therefore say I unto you, the kingdom of God shall be taken from you, and given to a nation bringing forth the FRUITS thereof.

Previously in part 3 of this writing we have already presented a sample biblical statement indicating that the number of FRUITS of the Tree of Life is twelve (Revelation 22:2). Let us also keep in mind the general meaning of the word fruit in English, as stated in the Webster dictionary, which is quite similar in Arabic and Aramaic and …:

Fruit: anything produced or accruing; product, result, or effect; return or profit.

So we see that according to the Bible, the Prophet coming after Jesus (SBUT) was going to bring forth twelve FRUITS, and  the Kingdom of God in the Last Days on earth is going to be in the Ommat (Nation) which these twelve FRUITS -or as said by Dr. Thomas McElwain: “twelve holy Imams”- are among them.

Yes, The true believers, eagerly and patiently, count the seconds in anticipation of the last Remained FRUIT of that TREE, Hadrat Mahdi (SBUH) to establish the Kingdom of Allah on the entire earth, with the help of Prophet Jesus (SBUH) and … .

It’s essential to keep in mind that the few glad tidings of gospel regarding the Prophet Mohammad and his AhlulBayt (SBUT) mentioned in different writings in this site, are firstly merely samples of existing glad tidings in the current bible, and secondly due to distortions and … in the bible, these glad tidings are only implied and not directly stated. This is of course because Shaytaan (Eblis) has sworn that he would sit on the Straight Path, i.e. Allah Defined and Ordained Path toward everlasting Salvation:

Qur’an 7:16 … I will certainly lie in wait for them in Thy Straight Path.

And therefore Shaytaan -at the hand of his friends and followers- has been targeting the identities of the Prophet of the Last Days, and his Successors, and the Last of them specifically, he who shall establish the Promise of Allah, the final Kingdom on earth. As the Prophet Mohammad (SBUH&HA) has said over and over including in his final formal speech, the everlasting Ghadir Sermon, he and his twelve Successors have been the “Straight Path” … .

It is also noteworthy to again mention that the origin of distortions in the books of previous Prophets, such as the Gospel of Jesus (SBUH), was the usurpation of the position of the Allah Bestowed Successorship of Prophets (SBUT). In the case of the Prophet Jesus (SBUH) his Allah Chosen Successor was Sham’oon Safa, Simon Peter, that Paul , obeying Shaytaan, usurped his position, and thus started the contamination of the Pure teachings of Jesus (SBUH) using the heresy and polytheism of  the previous ones and … . Unfortunately while there are sects within christianity who claim that they love and gratify Peter, but they too practically follow the so called paulene christianity with its heresy and polytheism and … .