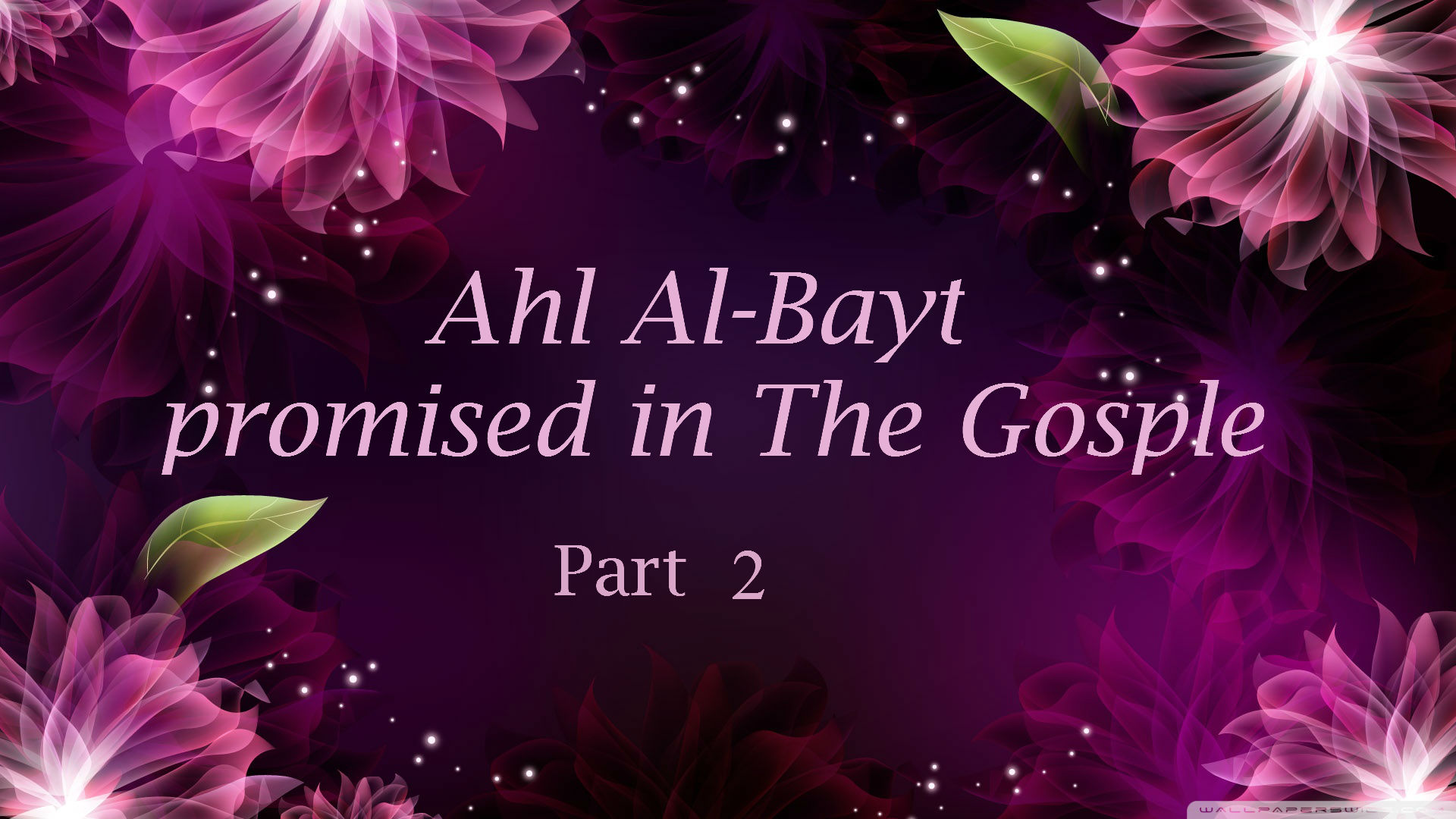 Christians in John 5:46 have stated that Jesus (PBUH) said to the people who claimed that they were the followers of Moses (PBUH):

For had ye believed Moses, ye would have believed me; for he wrote of me.

In other words, the Prophet Jesus (PBUH) was telling them that if they TRULY were followers of the Prophet Moses (PBUH), then they would have certainly followed him because Prophet Moses had given glad tidings regarding him.

At this point we wish to present the same argument from Jesus (PBUH) to those who claim that they are followers of Jesus:

We also cordially invite our friends to refer to: “Mohammad, the Promise of Torah”, “What the Bible says about Muhammad”, “Story of Fakhr-Ul-Islam” and other related writings in this site: kindfather.com

And after reading these and similar writings, we wish to present the same aforementioned argument to those who TRULY love the Prophet Moses (PBUH) too and wish to follow him … .

Glad Tidings to the “FRUITS” of the Prophet Mohammad (PBUH&HA)

Now we wish to mention a sample of the remaining glad Tidings in the existing bible, regarding the Allah Chosen members of the progeny of the Prophet Mohammad (SBUT).

As briefly stated in the article “Mohammad, the Promise of Torah”, in the old testament of the current bible, book of genesis chapter 21 statements 14 to 21, the migration of Lady Haajar (Hagar) and Prophet Ismael (Ishmael) (SBUT) to Phaaraan (Paran), or the current Mecca, is mentioned. In the Magnificent Qur’an Surah Ibrahim (14) verses 35 to 37, it is stated that when the Prophet Ibrahim(PBUH ), by the command of Allah, settled his wife and first born, Lady Haajar and Prophet Ismael (SBUT), in the ever-sacred land of Ka’ba, he (PBUH) prayed for his first born, Ismael, and his (Ibrahim’s) offspring from the children of Ismael (SBUT), that by the Grace of Allah, they would be totally away from the worship of idols and that they would perform Salaat (Specified Prayers …). Ibrahim (PBUH) said that those people from among Ismael’s offspring, who follow him (Ibrahim), shall be of him (Ibrahim). Ibrahim (PBUH) implored Allah to make the hearts of some people yearn toward and love the children of Ismael and bless them with “FRUITS”.

In Surah Baqarah (2) verses 124 to 128 of the Magnificent Qur’an, it has been stated that after the Prophet Ibrahim (PBUH) was tried with certain matters, such as attempting to sacrifice his son Ismael, and fulfilling them successfully, the Almighty Allah bestowed upon him the eminent status of Imamat (Allah Ordained Leadership); a status so exalted that It was bestowed upon him (PBUH) after he was already been granted with the sublime status of Prophet hood. Ibrahim (PBUH) asked Allah that, he and his son Ismael be two Muslims and submitters before Allah and that, from among Ismael’s descendants come a Muslim Ummah (Ummah, Nation) believing in Allah and the Day of Resurrection. The Prophet Ibrahim also asked Allah that this Ummah to benefit from the “FRUITS”. Ibrahim’s (PBUH) request from Allah was that from Ismael’s children a Rasool of supreme dignity be appointed; a grandeur Prophet whose “FRUITS” would be the inheritors of the Divine “Covenant” , the “Ahd” of Imamat and Leadership of humankind; the same “Covenant” that Allah has said in these very same verses, that it will never be bestowed upon the Unjust. It is noteworthy to mention that according to the great Qur’an, polytheism is a great unjustness and oppression (Qur’an 31:13; …).

In the collections of Hadith of the Infallible Ones (SBUT) interpreting verses of the Qur’an, such as the Tafsirs of ‘Ayaashi, Borhaan, Jaame’ and …, in regard to the aforementioned verses it has been said that the Prophet Mohammad (PBUH&HA) has said that he was the answer to Ibrahim’s prayer and request. According to Imam Sadiq’s (PBUH) explanation, a Prophet from an Ummah within the children of Ismael, meaning Bani-Haashem –i.e. the children of Haashem- were absolutely never defiled by polytheism and idolatry. The Prophet Mohammad (PBUH&HA) has clarified that by the Prophet Ibrahim’s (PBUH) prayer, all his forefathers and foremothers were monotheists; and Imam Baqir (PBUH) has stated that the Ahl al Bayt (SBUT) have been the remainder of that same offspring of Ibrahim from the children of Ismael whom Ibrahim (SBUT) prayed for.

In the book of genesis of the current bible chapter 17, statement 20, God’s answer to the Prophet Abraham’s -Ibrahim’s- (PBUH) prayer is mentioned:

And as for Ishmael [Ismael], I have heard thee: Behold, I have blessed him, and will make him FRUITFUL, and will multiply him exceedingly; TWELVE PRINCES shall he beget, and I will make him a great nation [Ummah].

In fact the aforementioned Qur’anic verses confirm this remaining statement in the book of genesis of the bible and clarify further that the Almighty Allah blessed Ismael and from the children of Ibrahim through Ismael (SBUT) brought about a big Ummah; and from a certain totally monotheist branch of them called the Bani-Haashem, who were the TRUE followers of the Prophet Ibrahim, Allah appointed a supreme Prophet (Messenger, Apostle, …) called Mohammad (PBUH&HA) and made Ismael FRUITFUL through him;  Allah, from him, brought about twelve FRUITS, twelve princes, i.e. the twelve Infallible Imams (SBUT), the heirs of the “Ahd” or the  “Covenant” of Imamat, Allah Ordained Leadership and Guidance of humankind.

It is very important to mention that we, based on the Majestic Qur’an and the pure teachings of the Prophet Mohammad and his twelve Infallible Successors (SBUT), absolutely do not deny the Allah bestowed leadership of the Prophet Ismael’s brother, the Prophet Isaac and chosen Prophets among his offspring (SBUT); but those who have been malevolently distorting the bible and its interpretation throughout the ages, through numerous deceits such as introducing Allah’s Appointee, the Prophet Ibrahim, as a sinner and thus the Prophet Ismael as an illegitimate child (SOBHANALLAH), and shamelessly going so far to call the Prophet Ismael (PBUH) as a “wild donkey of a man” (NIV bible genesis 16:12), and by implying, contradictiously in some statements, that the Prophet Isaac (PBUH) was the first born, and by …, have tried to conceal the identity of the Last Prophet of Allah and his Last Successor, the Savior of humankind.

Of course by the Grace of Allah as usual their attempts have been barren and their claims have always been proven wrong from their own scriptures, such as the above mentioned biblical statement which clearly glorifies Ismael (PBUH). Many former Christian scholars have also addressed such deceitful issues, for instance Shifa L Mustapha in her book: In Quest of Truth, from Deception to Deliverance; we have also briefly presented some of such deceits in different writings in this site, such as “Mohammad, the Promise of Torah”, “The story of Fakhr-Ul-Islam”, “Mohammad, the Promise of Gospel”, “Two Messiahs”, “Imam Mahdi’s (PBUH) Birth, Ascension and Rise, and the Revelation of John” and … .

In the satanic path of concealing the real identity of the Savior of the Last Days, some biblical distorters by trying to relate the above mentioned Ibrahim’s prayer in the 17th chapter of genesis to the names mentioned in the 25th chapter, have attempted to misinterpret and thus conceal the facts. It is noteworthy to mention that, even among Christians themselves, there are different opinions in regard to the statements in the 25th chapter and the status and identities of the characters mentioned, which we are not going to address in this writing; but we emphasize that by the Grace of Allah, there are other remaining statements in the current bible that clearly prove the genuineness of Ibrahim’s prayer in chapter 17 of genesis and point toward the identities of the twelve princes, masters, lords … .