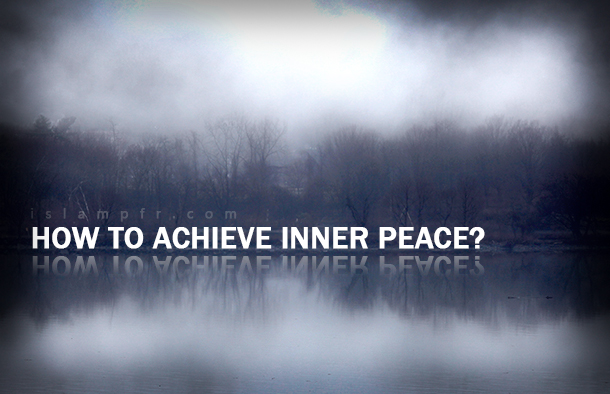 The holy Quran states remembrance of God as the cause of inner peace:

Quotations of infallibles has emphasized on this issue. Imam Ali (PBUH) says:

“Remembrance of god is brightness of chests and peace of the hearts.” (2)

“There is no peace for heart but by your remembrance” (3)

“Those who believe and do not mix up their faith with iniquity, those are they who shall have the security” (4)

Luqman the wise lectured his son:

“Oh my son! The world is a deep water in which many people have drowned. So your vessel through it should be piety, your provision be the faith, your sail be the reliance on the lord, your captain be wisdom and your anchor be patience. (5)

On the other hand the negligence is the root of heart’s unrest. The holy Quran says:

“And whoever turns away from My Reminder, his shall surely be a straitened life,” (6)

If we seek to clarify the meaning of the verse “Be sure that real peace for the hearts rests In Allah’s Remembrance”, first we should consider the source of unrest. The source of unrest in human’s soul is his fear from his unknown future, his unanswered real needs like knowledge, power, perfect life and attainment of every wish.

Another part of unrest is from the fear of dangers, poverty, insecurity, rejection and etc. and a part of it is related to his/her conscience which blame him/her for his slips and sins and makes him to be scared from their consequences.

The main factor which is effective in appearance of soul’s unrest and spiritual and intellectual wellbeing is one’s insight, thinking, viewpoint and relationship toward the world, people and society regarding his past and future.

If we think a little, we will understand that there is a direct correlation between our way of justification and thinking about events and incidences and our level of sadness, depression, desolation feeling or self-confidence, self-esteem, mobility and will power and as a result alacrity, merriment and spiritual and mental peace.

Anyone who has faith in God and has come to believe that every event in the world is realized according to a special order and is in conformity with God’s aim and wisdom and not even a leaf drops down without God’s permission, will not be scared of any hardship. He won’t be frightened from calamities of the time, because he performs his duty like a firm and stable mountain.

He also tries to achieve whatever he has in mind. If he tries and fails, he knows that it was not his fault and he has no liability, so he has spiritual peace. On the other hand he knows that there has been a reason and benefit that he has not achieved his desirable goal in that time and condition, since god always seeks the benefit and good of his servants. Knowing this fact, his mental peace will increase since the Holy Quran says:

“So that you may not grieve for what has escaped you, nor be exultant at what He has given you” (7)

So whatever happens to you has a reason and a responsibility.

But the events of past and the future will make anxiety in the heart of anyone who has a materialistic viewpoint toward the world, or the faith has not been consolidated in his heart and has not come further from his superficial mind. Thus the men of faith should continuously consolidate their faith through enhancement of their knowledge and insight about the God, strengthening their mentality to recognize the right and to accept it, diligence in performing good deeds, attention and thinking about the judgment in judgment day, chanting and praying to god especially at dawn, responsibility, compassion and servitude feeling toward the god’s servants, meeting and accompanying pious scholars and the righteous people.

Attachment to this world aggravates sadness and depression. Abstinence and indifference to this world, relives the soul and the body. (8)

Once a rich man and a poor man were travelling together. The rich had some coins and the poor had nothing but his clothes and a fardel of breads which had tied to his belt. At night they reached a well, ate some bread and slept. But the rich could not sleep because he was scared that some thieves would steal his coins, while the poor slept with eased mind till morning. Imam Ali says:

The wealth is a cause of agony and is a bearer of discomfort. (9)

It’s true, only the remembrance of the God and compliance of his orders in all fields and aspects is capable of bringing true and absolute peace. Dr. Alexis Carrel (French scientist, physiologist and researcher and winner of Noble prize) says: praying is the strongest force which men are able to create. It is a force which like gravity has subjective existence. (10)

Somewhere else he says: “We should not regard praying equal to welfare, because praying while bringing about peace, completely and correctly stimulates a kind of efflorescence, inner pleasure, heroism and prowess in the actions of human brain.”(11)