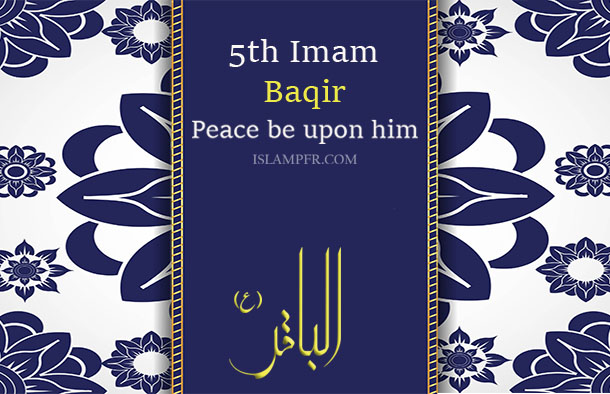 Imam Muḥammad Al-Baqir (Arabic: محمد الباقر ‎) was Known as Baqir (the one who splits open knowledge). He is the fifth Shia Imam after his father Imam Sajjad (PBUH). His mother was the daughter of Imam Hassan Mojtaba (PBUH). Thus, he was the only Imam who was connected with Lady Fatimah (PBUH), both from his paternal and maternal sides.

Imam Baqir (PBUH) was brought up in the holy arms of his grandfather Imam Hussain (PBUH), for three years. Many traditions and abundant knowledge were reported on his authority. He is revered by Shia Muslims for his religious leadership and highly respected by Sunni Muslims for his knowledge and Islamic scholarship as a leading jurist of Medina.

Imam Baqir (PBUH) was born about 677 A.D (1 Rajab 57 A.H) in Medina, around the time when Muawiyah was trying to secure the oath of allegiance for his son and future successor Yazid. He was four years old when the Battle of Karbala happened, the day his holy grandfather, Imam Hussain (PBUH), was slaughtered.

The neme Baqir is a shortened form of Baqir Al-Oloum, (He who split open knowledge). Imam Baqir (PBUH) is said to have been highly esteemed for his learning. According to Ya’qubi, he was called Baqir because he split open knowledge, that is, he scrutinized it, and examined into the depths of it. This name was given to him by the Prophet Muhammad (PBUH).

According to an account recorded in al-Kulayni, Jabir Ibn Abd Allah, the oldest surviving companion of Prophet Muhammad (PBUH), would sit in the mosque wearing a black turban and call out: “Ya Baqir Al- Oloum, Ya Baqir Al- Oloum.” People in Medina thought that Jabir was talking nonsense, but he reassured them that he was acting in this way because he had heard the Prophet say: “O Jabir! You will meet a man from my family who will have the same name and the same characteristics as mine. He will split open knowledge extensively”. On the question of how Jabir met Imam Baqir (PBUH), al-Kulayni reports that one day while Al-Jabir was walking in the streets of Medina, he came across the Quran School which Imam Baqir attended as a child. When Jabir saw the Imam, he asked him to come near, which the child did, then to withdraw, which Imam Baqir also did.

At this point Jabir explained: “Characteristics of the Messenger of Allah; by Him in whose hands is my soul, O boy, what is your name”. When Imam Baqir (PBUH) replied that he was Muhammad Ibn ‘Ali Ibn Al-Hussain (PBUH), Jabir approached him, kissed his head and swore by his father and mother that the Prophet (PBUH) had recited greeting upon him.

A famous scholar belonging to the Sunni School says: “Imam Muhammad Al-Baqir (PBUH) has disclosed the secrets of knowledge and wisdom and unfolded the principles of spiritual and religious guidance. Nobody can deny his exalted character, his Allah-given knowledge, his divinely-gifted wisdom and his obligation and gratitude towards spreading of knowledge. He was a sacred and highly talented spiritual leader and for this reason he was popularly titled “Baqir” which means “the expander of knowledge”.

Kind of heart, spotless in character, sacred by soul and noble by nature, the Imam devoted all his time in submission to Allah (and in advocating the teachings of the Holy Prophet and his descendants). It is beyond the power of a man to count the deep impression of knowledge and guidance left by the Imam on the hearts of the faithful. His sayings in devotion and abstinence, in knowledge and wisdom, and in religious exercise and submission to Allah are so great in number that the volume of this book is quite in- sufficient to cover them all.

The Holy Imam managed to collect the teachings and reforms of the Prophet and his Ahl Al-Bayt (the prophet’s progeny) in the form of books. His pupils compiled books on different branches of science and arts under his instructions and guidance. In the excellence of his personal purity and Godly traits, Imam Baqir (PBUH) was a model of the Holy Prophet and his great grandfather, Imam Ali (PBUH). His admonitions created a spiritual sensation among the Muslims in general. He was not only hospitable even to his worst enemies but also used to continually exhort them to the right path. He urged people to earn their livelihood by their own hard work. The Imam gave much importance to convening meetings and gatherings in commemoration of the martyrdom of Imam Hussain (PBUH). To keep his path alive, i.e. “standing against oppression. “.

During the Imamate of the fifth Imam, as a result of the injustice of the Umayyad, revolts and wars broke out in some corner of the Islamic world every day. Moreover, there were disputes within the Umayyad family itself which kept the caliphate busy and to a certain extent left the members of the progeny of Prophet Muhammad (PBUH), Ahl Al-Bayt, alone. From the other side, the Battle of Karbala and the oppression suffered by the progeny of the Prophet (PBUH), of which Imam Sajjad (PBUH) was the most noteworthy embodiment, had attracted many Muslims to the Imams. These factors combined to make it possible for people and especially the Shia to go in great numbers to Medina and to come into the presence of Imam Baqir (PBUH). Possibilities for disseminating Islam, which had never existed for the Imams before him, were presented to the the Imam, as shown by numerous traditions recounted from Imam Baqir (PBUH) and the large number of scholars who were trained by him.

After martyrdom of Imam Sajjad (PBUH) the majority of the Shia accepted as Imam, his son, Muhammad Al-Baqir (PBUH) because the prophet Muhammad (PBUH) had said the names of Imams after himself (by the order of God).

However, a minority followed Zayd ibn Ali, another son of Imam Sajjad (PBUH), and became known as Zaydis. According to Ibn Khallikan, Zaid, the brother of Imam Baqir (PBUH) came forward in his own behalf and summoned the people to espouse his cause. Al-Masudi, however, says that he consulted with his brother, Imam Baqir, who warned him not to put any reliance on the people of Kufa, with details of how they had treated Ahl Al-Bayt formerly. Zaid, however, did not heed his brother’s warning but led the people of Kufa in a vain rebellion. Shahrastani mentions that a disagreement had arisen between Zaid and his brother Muhammad Al-Baqir because Zaid had been following the teaching of the Mu’tazilite, Wasil Ibn Ata. He had also asserted that the status of an Imam was conditional upon his appearing publicly to claim his rights. And in answer, Imam Baqir (PBUH) said to Zaid, “Your faith then is merely in your father, as such, for according to your theory he was not an Imam, for he certainly never came forth to assert his claims.”

“Ma’athiru’l-Baqir” is a book in which the Imam discoursed fully on many topics, such as the nature of the soul of man, the qualities of the scholars and the nature and attributes of Allah (God). He discouraged arguments about the divine nature, and that it was not possible for men to understand it. To illustrate, one day a man asked him: “Should I think of anything (to understand Allah)?” The Imam replied: “Yes, but you have to imagine a thing which the mind cannot contain and which is without limit. He is unlike whatever comes into your mind. Nothing resembles Him nor can any thought reach Him. How can He be perceived when He is totally different from whatever is conceived and is the reverse of whatever is imagined? Certainly, the thing which cannot be encompassed by the mind and which is without limits is that which should be imagined.”

It is among his saying that: “Talk about the creation of Allah, but do not talk about Allah Himself, for that increases the owner of the talk nothing except perplexity.” He defined a Messenger as a prophet who hears the voice of the angel (of revelation) and sees the angel in a bodily form or in a dream; Prophet, he said, is a prophet who also hears the voice of the angel under the same conditions, but does not see him; and ‘the Imam’s condition is like that of the Prophet and not like that of the Messenger. He said that the Imams were pure and free from the sin; that all the world was under their rule, that through them the eye of Allah mercy falls on men; and that, if they did not exist, men would perish, and that they should not fear though worthless fellows might deny all this. The Imam was frequently called upon to explain particular teachings in regard to the Imamate, which is also explained in Ma’athiru’l-Baqir.

Umm Al-Kitab or The Archetype of the Book is in the form of a conversation between Imam Baqir (PBUH) and three of his followers. From the start it is clearly reminiscent of the Gospel of the Infancy, already making it evident how Imamology is homologous to Gnostic Christology. Among principal motifs of this book is the mystical science of letters. The central idea in the work is the psychological and philosophical interpretation of cosmological symbols, and the faithful are asked to engage themselves in acts of inner purification and transformation. Throughout the work, the theology of light pervades every doctrine. An extraordinary number of colors are displayed to symbolize different theories and the corresponding levels of consciousness that man must realize within himself.

“Tafsir Al-Baqir” (Imam Baqir’s interpretation) or “Tafsir Abul Jaroud” is Imam Baqir’s exegesis of the holy Quran. Ibn Al-Nadim mentioned this book in his book “Kitab Al-Fihrist” when he mentioned the books written on the exegesis of the Quran. He says Abul Jaroud Ziyad Ibn Abi Ziyad, the head of the Jarudiyya, reported the book of Imam Baqir (PBUH). According to Sayid Hassan Al-Sadr a group of the reliable Shia, reported the book from him (Abul Jaroud) from the days of his righteousness.

Imam Baqir (PBUH) martyred in 733 A.D (7 Zu al-Hajjah 114 A.H) in the age 57. He was poisoned by Ibrahim Ibn Walid, nephew of Hisham, the Umayyad caliph. According to the Shia narrations, the Caliph gave someone a saddle that had been treated with poison, and Zaid managed matters so that this saddle was given to the Imam, who used it and martyred from the effects of the poison. He was laid to rest underneath the same dome in the cemetery of Baqi where Imam Hassan Mojtaba (PBUH) and Imam Sajjad (PBUH) were buried.

The shrine containing Imam Baqir’s tomb was destroyed in 1925 during the conquest of Medina by Al-Saud tribes (Wahhabi). This was part of a general destruction of memorials in cemeteries for beliefs. In the eyes of Wahhabis, historical sites and shrines encourage “shirk” (the sin of idolatry or polytheism) and should be destroyed but it’s against Islam’s view. It’s provable that keeping these memorials and pilgrimage isn’t Shirk. 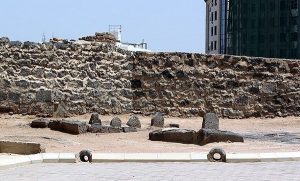